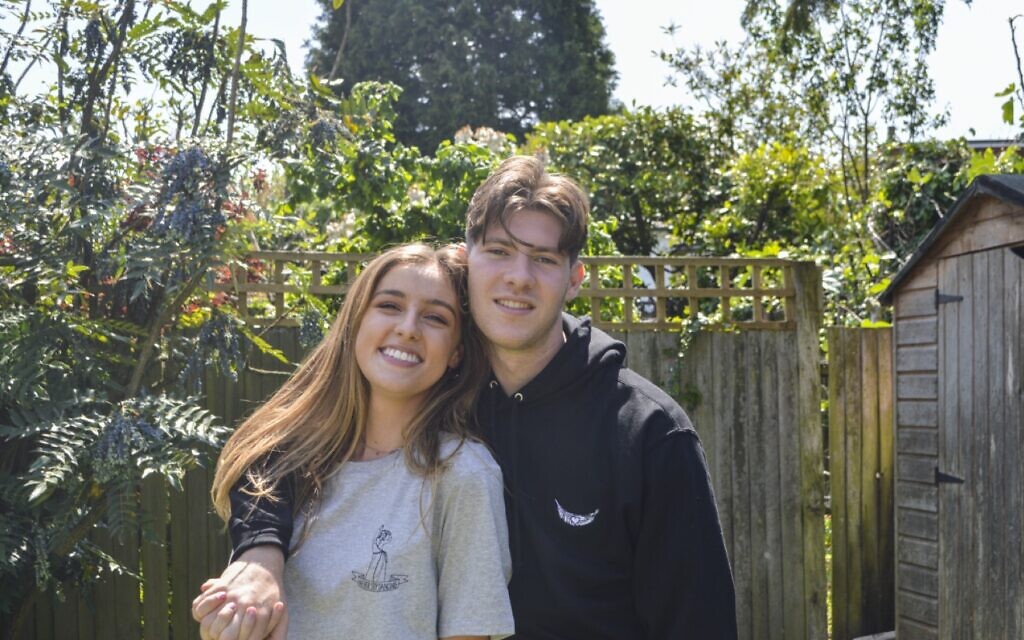 Joe with girlfriend Jess wearing his  merchandise. They met via the podcast

Devastated after his mother lost her 11- year-long fight against breast cancer, former JFS and JCoSS pupil Joe Bellman opened up about his feelings through a candid podcast on coping with grief.

Now, after 25 episodes of his Living With Loss series – which is available on Apple, Spotify and YouTube – Bellman, 21, is one of the most respected commentators on the sensitive topic, especially among younger listeners struggling to come to terms with tragic circumstances.

“When I first lost mum, one of the things I looked towards was the internet, as I tried to work out what to do as a young person who had just lost a parent,” recalls Bellman, of the weeks following his mother Michelle’s death in October 2019.

“I found there was a lack of relatable resources for young people who were going through bereavement. One thing mum always showed us was the importance of helping others and  the best way was to speak openly about grief and loss itself. That’s why I started the podcasts.” 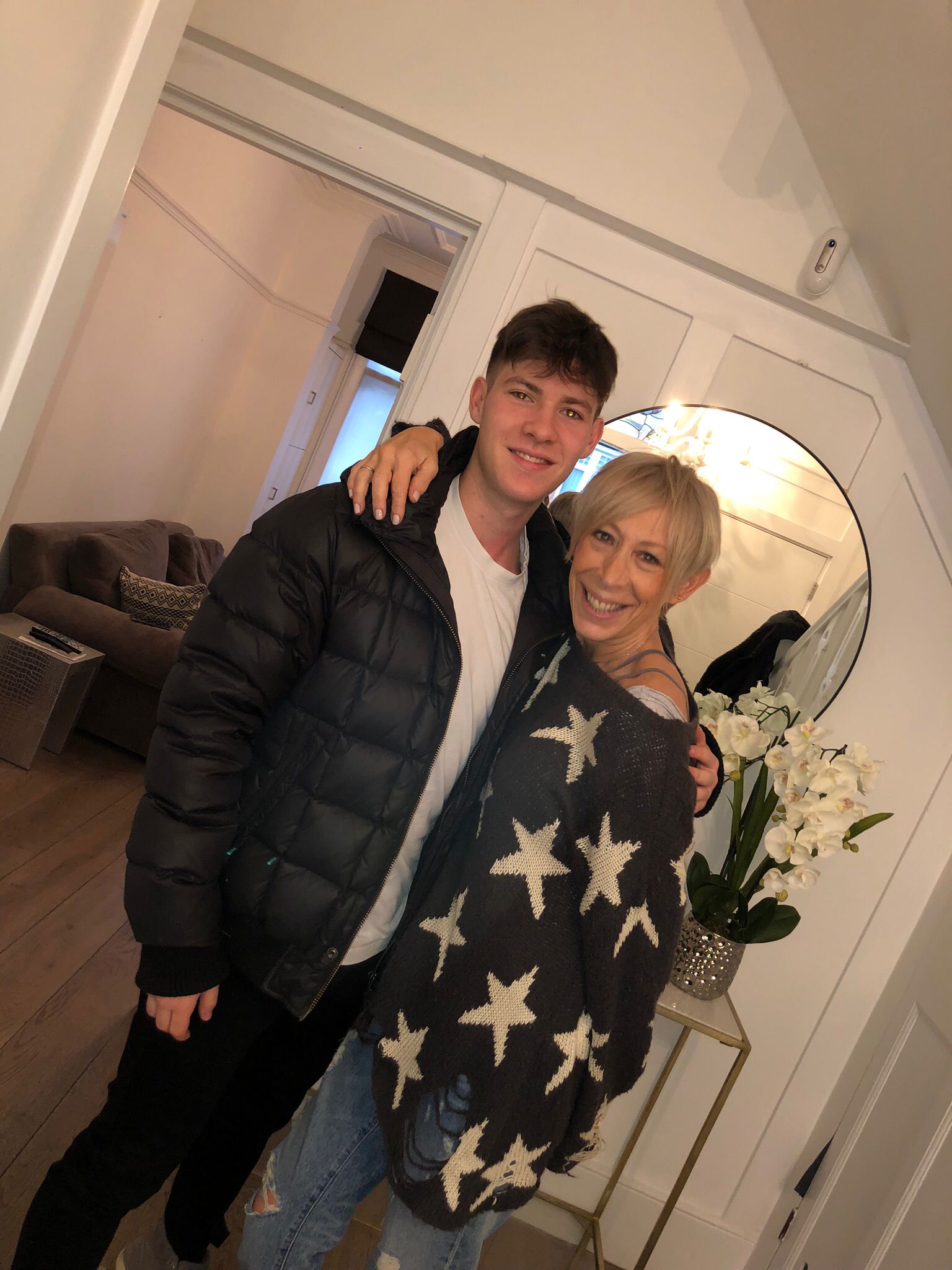 Joe Bellman with his late mother, Michelle, who died in 2019

A primary school teacher, and always full of life, even during her gruelling battle against cancer, Michelle had taken part in numerous events to help raise awareness of the disease.

“She was diagnosed when I was eight,” Finchley-born Bellman recalls. “In a way that means we made the most of the moments she had, but it doesn’t make the loss go away. So I’ve found ways to carry it as inspiration, as a way to find more freedom and connection in life.”

Bellman, 21, used his barmitzvah money to help pay for the hire of a sound engineer and a visual editor for the podcasts.

After hearing Bellman’s narrative – in which he described how his mother’s determination to carry on living her life to the full up until her final days in hospital left him inspired to do something that properly honoured her legacy – he was soon approached by other people learning to cope with grief and loss themselves.

His podcasts now attract audiences of several thousand each month. 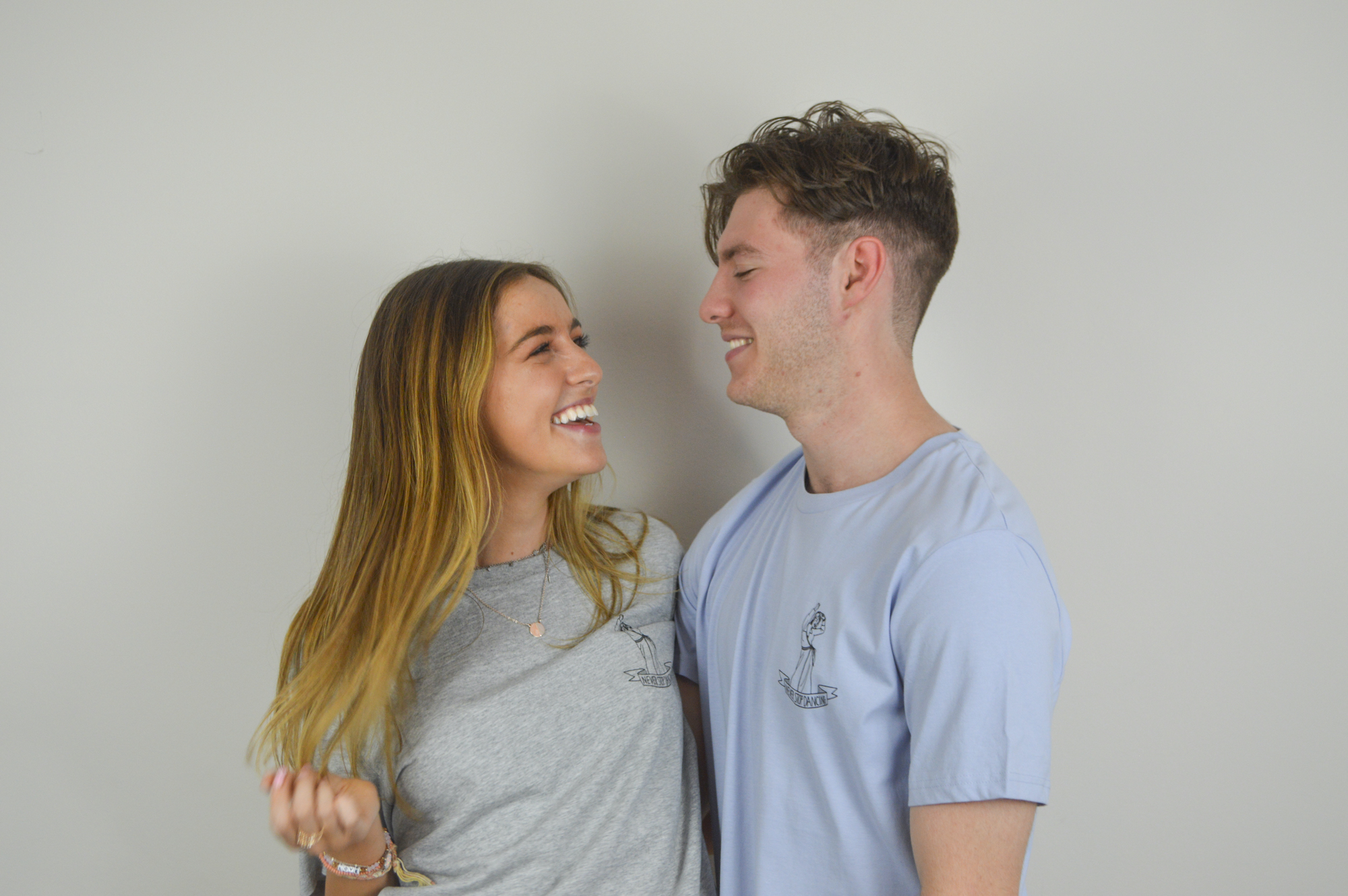 Joe with his girlfriend, who he met through the podcast, wearing merchandise which raises money to honour her memory

“One of the things I rasise is how these conversations release a lot of trauma,” explains the Nottingham University student. “I’ve spoken to people who have had cancer at the age of 15 and someone who has lived through alopecia and has lost all their hair.”

Bellman, who has launched a merchandise fundraising initiative to help fund his broadcasts  says the podcasts have helped his own mental health and has  changed his conversations with friends.

“It’s made me stronger. You learn to live with loss.”

The hoodies feature a feather logo embroidered onto the left side of the chest. Money raised will hopefully allow for broadcasts to continue, so the issue of dealing with grief can be discussed more widely.

“Many people see a feather and may think of someone passing by to show them the way; a reminder that they’re not alone,” he says.

“That’s what my mum told me- that when I saw a feather, she was with me.”

And the T-shirts shortly going on sale feature a computerised image that those who knew Michelle will recognise as her. 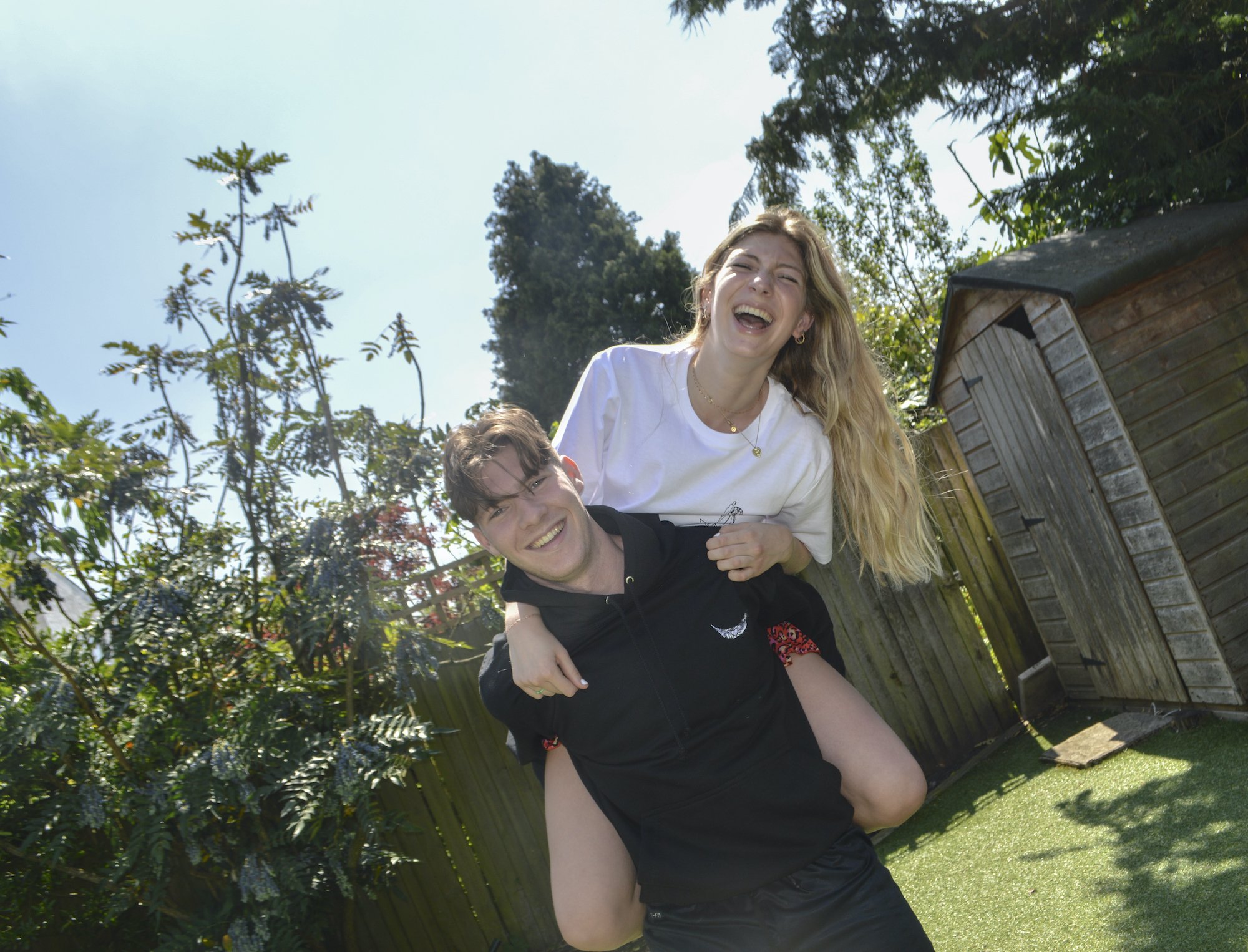 Joe with his sister Libby

“Underneath it says ‘never stop dancing’,” explains Bellman.  “Mum was known as the dancing queen.

“Even on a day when she had a blood transfusion and chemo, she took part in a fashion show,  dancing down the catwalk, and gave a speech for a charity she was involved with.

“It wasn’t just to show herself but to show me and my brother and sister that we could have fun and enjoy life, even when things were uncertain or scary.

“She still inspires me – and is still part of this journey.” 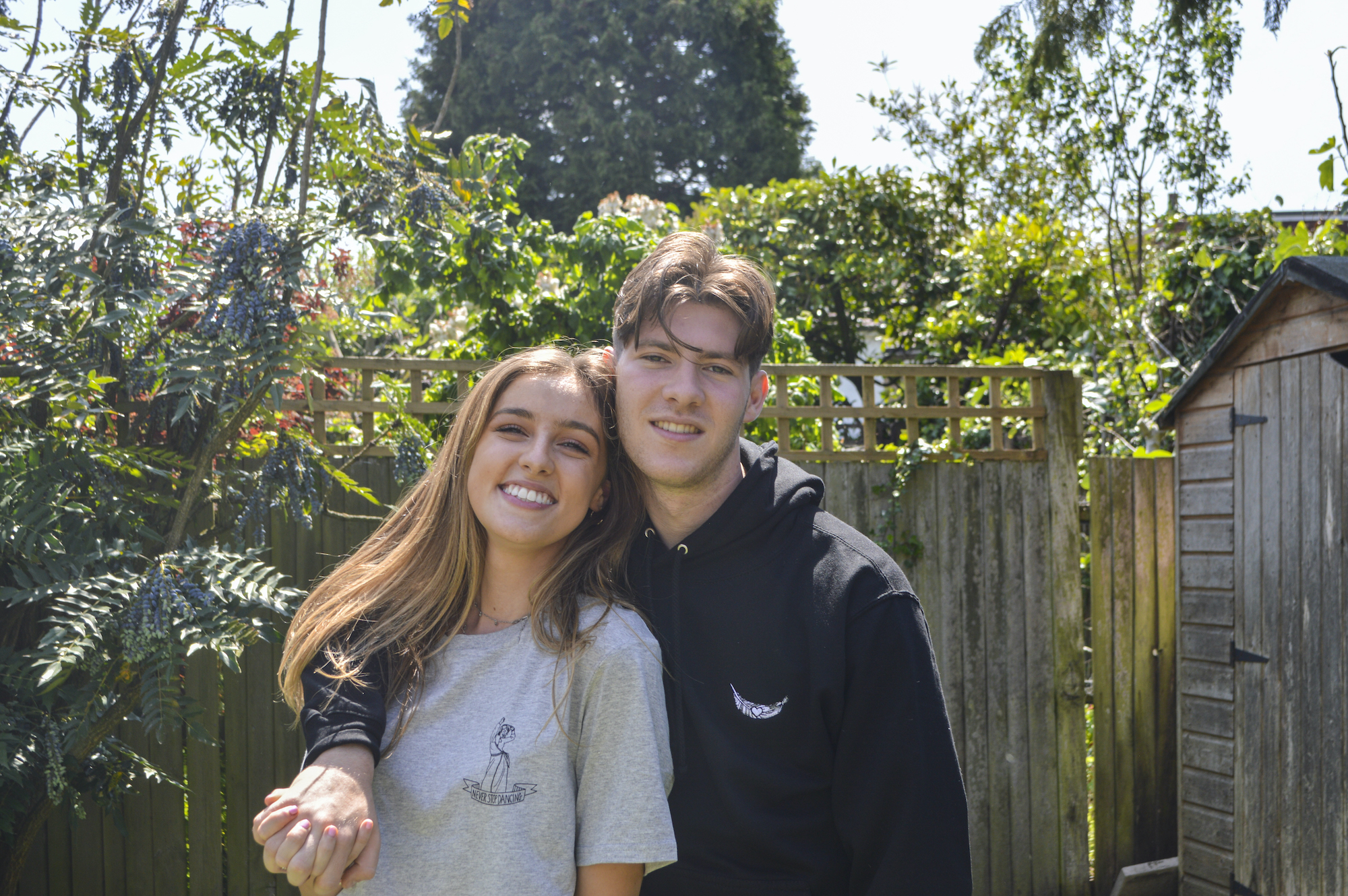 Joe with his girlfriend, who he met through the podcast, wearing merchandise which raises money to honour her memory

With the podcasts continuing to remain as popular, and as influential as ever, Bellman has now launched a new merchandise fundraising initiative to help ensure his broadcasts carry on.

“I want to carry the podcasts on, but my barmitzvah money won’t last forever,” he explains.

“I’m giving 10 per cent of sales to Grief Encounter, a charity that works with young people experiencing grief.

” Further money will go towards continuing to pay a sound engineer and the visual editor, who connects the video and sound for You Tube purposes.”