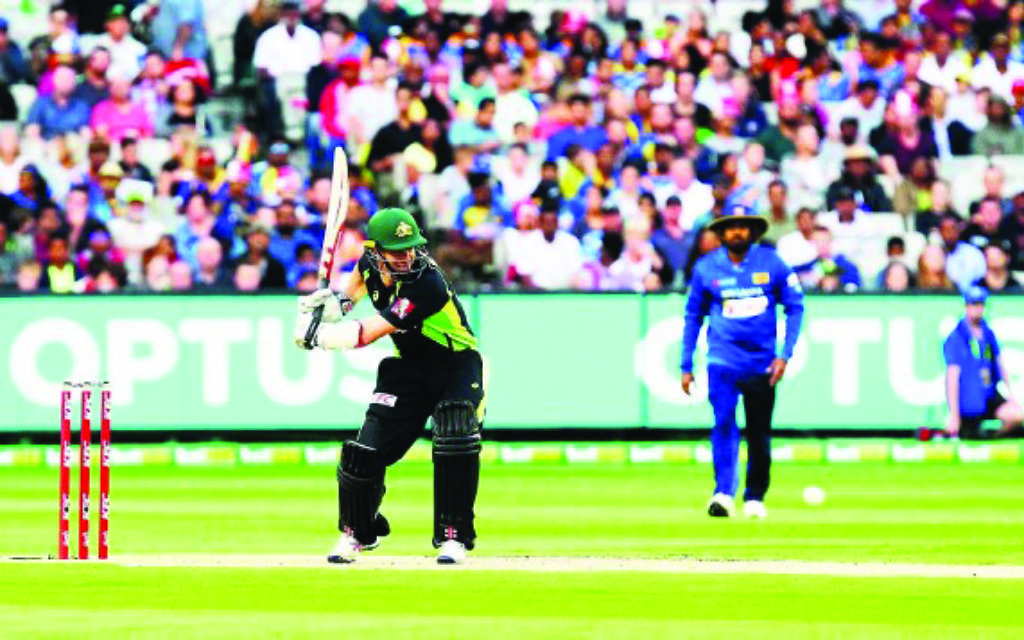 Ahead of his first appearance for the Australian national cricket team, Michael Klinger, 36, who also represented Australia at the 1997 Maccabiah Games, spent some time with Australian Jewish News’ Daniel Shandler to talk about the moment he found out he was selected, his career and his thoughts on being dubbed ‘the Jewish Bradman’.

Australian Jewish News: Who called to tell you about your selection and what was your reaction?

Michael Klinger: Initially we were about to walk out to training, the day before our Sheffield Shield game started and [Western Australia coach] Justin Langer just said, “Come outside for a second,” and gave me his phone, and the phone had a list of the Australia Twenty20 side. My name was second on the list under Aaron Finch and to be honest, I had a quick glance of who was in the squad but couldn’t remember anyone else. Once I saw my name there, it was pretty exciting. After that, he called Trevor Hohns on his phone because obviously as chairman of selectors he wanted to chat to us as well and he said, “congratulations, well deserved and good luck”. Before we started training, Justin just said, “Go call your family and let them know.” And I spoke to my wife and my dad, brother and sister and that was a pretty special moment as well.

AJN: How did your family react?

MK: The hardest thing was keeping it a secret. We weren’t allowed to tell anyone until the following morning when it came out publicly, so I told my close family and a couple of close friends, and everyone found out the next morning. Everyone was so excited and so happy for me to get that recognition. For me, I felt not only happy for myself but really pleased for my family and friends who have supported me for a long time, hopefully they got a fair bit out of it as well and hopefully they’ll be proud in a week or two’s time when I finally get out there which will be great. 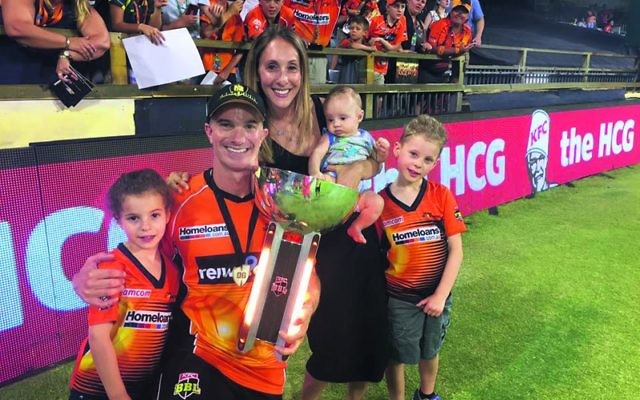 AJN: What does it mean to you to finally represent your country?

MK: It obviously means a lot. It’s been a lot of hard work. Not only 17 years as a professional cricketer, it’s also the years of 11, 12 years old onwards when my parents used to drive me around to the country areas to play for representative sides and to and from training and all that sort of stuff. It’s a combination of a lot of hard work and a great reward to the back end of my career.

AJN: There has been support for a Michael Klinger call-up for near on a decade. You even have a Facebook group called “Michael Klinger for Baggy Green”. Have you been aware of the support?

MK: A few people have made me aware of those sites [he said while laughing]. A few times I’ve been close and the general media have shown a lot of support as well. It just shows life and sport is a lot about timing. Other times, my timing may not have been great or when I was scoring a heap of runs, one or two other guys were also scoring a lot of runs and the selectors went for those guys. This time round, timing obviously played me in a final and in an overall tournament and no doubt a couple of guys not being available helped me as well. So, this time round my timing was right whereas maybe other times it wasn’t.

AJN: Has this selection given you any hope to perhaps one day play test cricket for Australia?

MK: To be honest, it’s very unlikely. They have shown their hand in terms of looking to go to a younger generation of players, and these young guys who they are choosing are performing very well. I doubt that would happen and I’m fine with that now. It would’ve been a huge achievement and something I would’ve loved to have done back when I was maybe in the frame but my [Sheffield] Shield performances haven’t been fantastic either. I’m nowhere near that at the moment, but even if I was, they’ve shown the direction with younger guys and they’ve been pretty successful so no hard feelings there. I’ll just enjoy this moment more than anything else.

AJN: How did it feel when you found out you were to play your first ever game representing Australia on the Melbourne Cricket Ground (MCG)?

MK: The way things have worked out, it’s just pretty lucky to be honest. If I get chosen in the [starting] 11, I get to play in front of a lot of my friends and family in Melbourne which will be great. It could have been – anywhere in Australia and to be in front of my family and friends, I probably couldn’t have asked for a better place to play my first game if I get selected in the 11. So the way it’s worked out is just brilliant.

AJN: Is it safe to say your family and friends will miss Shabbat dinner to come to the game?

MK: Yeah they’ll probably have it at the MCG I would’ve thought. A few people have messaged me and rang me and said unfortunately they can’t make it because they do keep Shabbat, but others are trying to get around it, whether they stay in hotels near the ground or something like that.

The amount of messages, on all forms, text messages, WhatsApps, Facebook, Twitter has been overwhelming to be honest. People who I haven’t heard from in a long time – ex-school teachers, friends from way, way back, it’s been really overwhelming. I’ve tried to get back to everyone but it’s been pretty difficult because the four days after the announcement, I didn’t have my phone on me from eight in the morning to seven at night because of the Sheffield Shield game, so I tried to get back to almost everyone during the night in that period.

AJN: You had an unbelievable Big Bash series. Did you have your eye on a potential call-up to the national team?

MK: To be honest, I didn’t think about international stuff. It wasn’t really until after the final when the media started talking me up a bit that I thought “maybe a slight chance”, but I still didn’t think it would happen because, as you’ve seen, a lot of the direction they are going with are younger, promising players who are performing really well. Even though people who were mentioning it and because I’ve come close in the past but it didn’t go my way, I didn’t think it would happen but what has worked in my favour is the actual Twenty20 format.

Generally Twenty20 cricket, selectors pick the best team and are not so much worrying about age. Probably the fact it was a T20 series really helped with that as well.

AJN: Do you have any expectations going into the three-match series against Sri Lanka?

MK: Yeah, I obviously want to do the best I can, as I do anytime I go out and bat in any format. I always try to score as many runs as I can and obviously at a good rate in Twenty20. 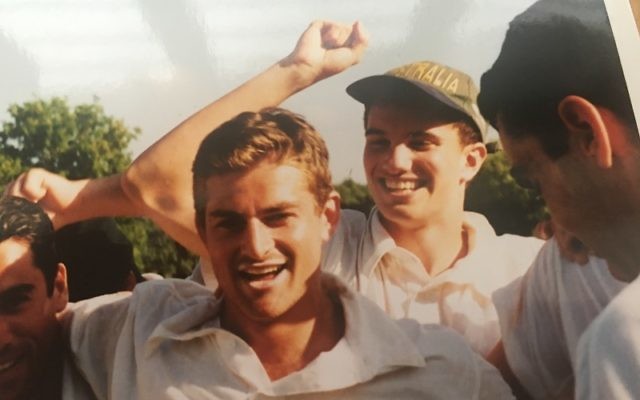 Klinger (back) celebrating after winning gold at the 1997 Maccabiah

AJN: The title – the Jewish Bradman – has come roaring back. Do you accept the title and how do you feel representing the Jewish community at the highest level?

MK: I don’t think I should be accepting that title, there’s been a few good cricketers in the past. Obviously Julian Weiner played test cricket. I know Julian well and I haven’t been able to achieve that, so I think that’s a fantastic effort. I suppose the advantage of what I have had that cricketers in previous years haven’t had is [being able] to play so many formats of the game.

I suppose whenever I retire one day, one of the things I’ll be proud of is to be able to perform so consistently over the three formats, which is really difficult to do at times for any player. That’s something I’ll be really proud of whenever the time is to put the bat away. If people want to think that, then that’s a great honour for people to say, but there have been other great cricketers as well.

AJN: When you do eventually retire, is a return to a Maccabi team on the cards?

MK: To be honest, the day I finish up I’d love to have some weekends with my family. It’s been such a long time where I have been away from my family, whether it’s interstate or overseas in England at times when they haven’t come over for the full periods of the winter. Whenever that time is, in a year or two, we will see what happens down the track. I think I owe a lot of weekends to my family, so it’s certainly not something I’ll be doing straight away I wouldn’t have thought.