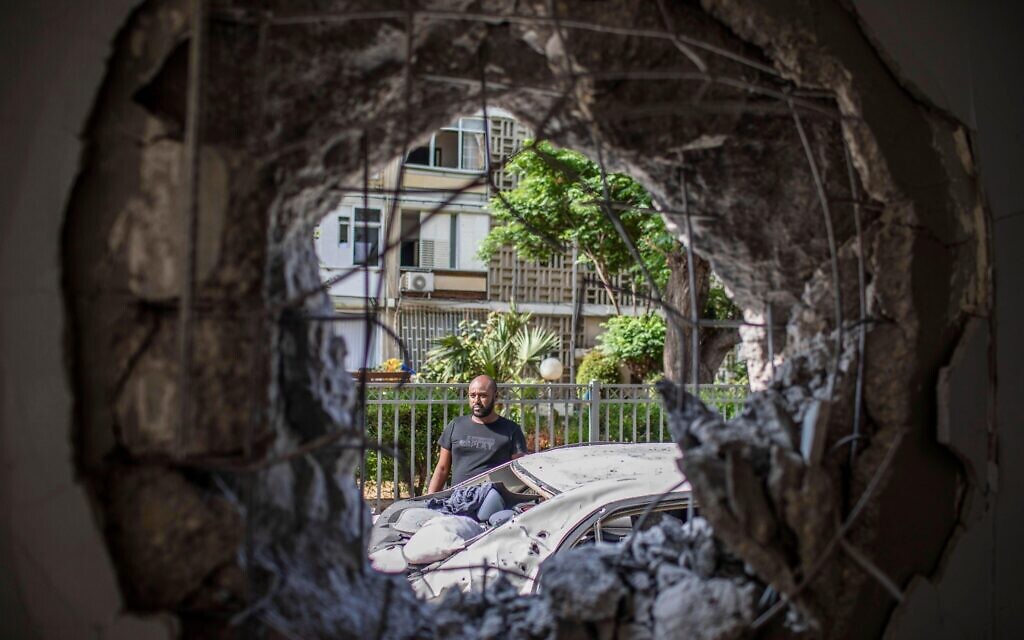 A man stands near a destroyed car and inspects a hole on a wall at a house that was hit by a rocket fired from the Gaza Strip towards Israel amid the escalating flare-up of Israeli-Palestinian violence. Credit: Ilia Yefimovich/dpa/Alamy Live News

On day nine, even as Israel insisted there was no timeframe for winding down  the fighting in Gaza, the indications were that the end was now much closer than the beginning.

The hopes were raised by the fourth phone call in a week between Joe Biden and Benjamin Netanyahu. The US president told the Israeli prime minister that he expected a “significant de-escalation” within hours.

It was the most explicit sign yet that the White House’s indulgence, which made the United States become the only major country not to demand an immediate ceasefire over what it termed “Israel’s right to self-defence”, was over. 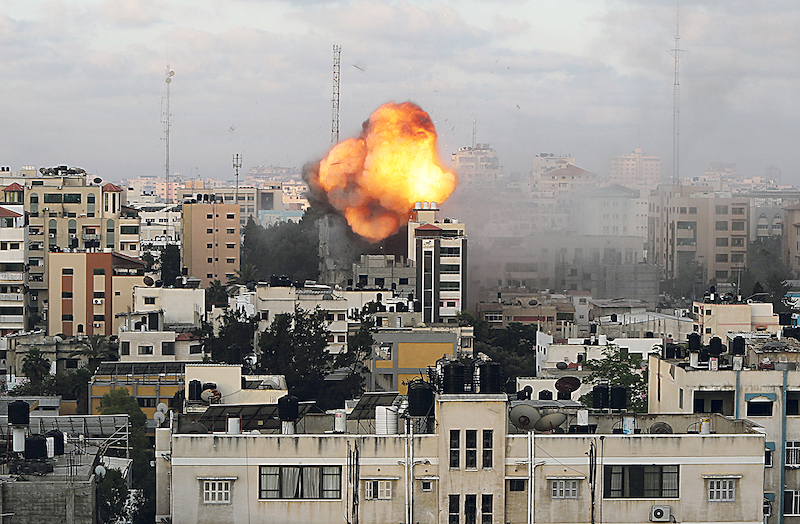 Smoke and flames are seen following an Israeli air strike on a building, amid a flare-up of Israeli-Palestinian fighting, in Gaza City May 18, 2021. REUTERS/Mohammed Salem

Meanwhile, as Hamas and Islamic Jihad continued to lob rockets into the sky and Israel pummelled Gaza, the conflict had changed: it was now being described in statistics, not events.

It was as if all sides had reached an unspoken agreement that numbers were the best way to describe what had spiralled into a cyclical routine.

The same thing happened in 2014, the last time Israel and Gaza confronted each other with this degree of rancour, but this year’s numbers were no less striking. Since Monday, 10 May, 12 people in Israel and at least 219 in Gaza have died and  more than 1,500 injured.

The total number of rockets launched aimlessly towards southern Israel was close to 4,000. Most were intercepted by the Iron Dome missile defence system.

Hundreds of others fell short and landed in Gaza itself. However, the minority that made it through were sufficient to force thousands of Israelis from Ashkelon to Beersheba to spend successive nights in their bomb shelters.

Israel’s response – air strikes its Israel Defense Forces (IDF) said were
targeting infrastructure and fighters – was having a wider effect. Multiple high-rise blocks were flattened. At least 18 hospitals and clinics, including Gaza’s only Covid-19 testing facility, were destroyed. Some 58,000 Palestinians have fled their homes.

There were fewer signs of last week’s sectarian violence that tore through Israeli towns inhabited by both Jews and Arabs, but the anger was still
palpable.

On Tuesday, Palestinians called a strike, a protest that led to shutters dropping around the usually bustling markets of Jerusalem’s Old City.

In the West Bank, hundreds of Palestinians took to the streets, many hurling stones at an Israeli military checkpoint in Ramallah. Three Palestinians were killed. Two soldiers were wounded by gunshots.

Four rockets were launched from across Israel’s border with Lebanon. The IDF blamed a  Palestinian faction. No casualties were reported.

A flurry of diplomacy has taken hold over the past week. Envoys from Egypt and Qatar waited several days for Israel’s response to the terms of a ceasefire deal reportedly agreed with Hamas. Germany’s Foreign Minister, Heiko Maas, was due in the region on Thursday for talks with Israelis and Palestinians.