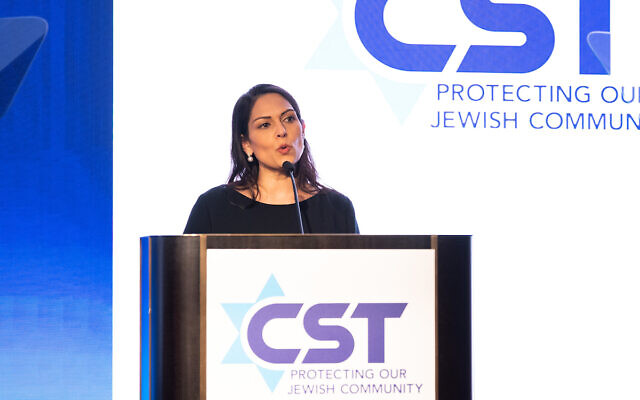 Home Secretary Priti Patel will today announce that the UK government is to proscribe the political wing of Hamas under the Terrorism Act.

Patel hopes to push through the change in parliament next week in a move that she said will help to combat antisemitism.

Anyone expressing support for the Islamist group or arranges meetings for them could face up to 10 years in prison.

The move, which will be announced by Patel during a visit to Washington, was welcomed by Jewish communal organisations who have called for the UK government to act following our withdrawal from the European Union.

Patel said she was imposing a “full fat” proscription on any ties to the Palestinian militant Islamists.

She told reporters in Washington DC: “We’ve taken the view that we can no longer disaggregate the sort of military and political side.

“It’s based upon a wide range of intelligence, information and also links to terrorism. The severity of that speaks for itself.”

In a speech on security on Friday, she is expected to say: “Hamas is fundamentally and rabidly antisemitic.

“Antisemitism is an enduring evil which I will never tolerate. Jewish people routinely feel unsafe – at school, in the streets, when they worship, in their homes, and online.

“This step will strengthen the case against anyone who waves a Hamas flag in the United Kingdom, an act that is bound to make Jewish people feel unsafe.”

Michael McCann from the Israel-Britain Alliance, which has long campaigned to proscribe Hamas, said it was “a victory for our supporters and partners across the UK who have sent over 25,000 individual letters to MPs and the Home Office highlighting this groups nefarious activities, and demonstrating beyond doubt that it acts as a single terrorist entity.”

The UK had previously only proscribed the Izz al-Din al-Qassam Brigades — the so-called ‘military wing’ of Hamas — relying on the European Union’s proscription of the entirety of Hamas as a de facto ban in the UK.

Following the UK’s exit from the European Union, however, this reliance was no longer tenable.

Former Labour MP Lord Ian Austin was among those to welcome the Home Secretary’s move having raised the issue of full Hamas proscription in the House of Lords only a few weeks ago.

He told Jewish News: “I am delighted the Home Secretary has banned the genocidal terrorists of Hamas who are opposed to any peace agreement, want to wipe Israel off the map, and murder the Jews who live there.

“They caused this year’s conflict by firing thousands of rockets indiscriminately at Israeli civilians, but they also rule Gaza in exactly the same way Isil ran the land it controlled.

“Women are treated terribly, gay men are killed, and opponents are arrested and executed. Hamas and Isil are merely different faces of the same Islamist threat that hates the West, our allies in the Middle East and everything we stand for.”

The move was also welcomed by the Board of Deputies.

Its president Marie van der Zyl said: “Full proscription ends the dangerous loophole via which this terrorist organisation can spread its extremist poison here and raise funds and support in the UK.

“Hamas regularly espouses violent ideology and grotesque antisemitism. It is responsible for countless terror attacks including suicide bombings, the murder of Israeli citizens and others, the use of Palestinian civilians as human shields, repression of political opponents, women, and LGBT people.

“We are immensely grateful that it will no longer have any safe harbour or support in the UK.”

Claudia Mendoza, co-chief exec of the Jewish Leadership Council said: “Hamas is committed to the destruction of Israel, the world’s only Jewish state.

“The myth that Hamas has separate military and political wings is finally laid to rest and we welcome this bold and important step by the government.”

Director of campaign group We Believe in Israel Luke Akehurst said: “It is very important that this ridiculous and dangerous loophole is being closed. We have campaigned for many years for the entirety of the terrorist organisation

“Hamas to be banned in the UK so that it cannot propagandise and spread its antisemitic message of hatred of Israel and Jews here.

“Thousands of our grassroots supporters emailed their MPs to call for this action in recent months. We welcome the Government’s decision to listen to this concern and act on it. We call on all MPs of all parties to support this move.”

Richard P Woolf from the Zionist Federation added: “Jewish people deserve to go about their daily lives without the threat of encountering openly antisemitic, threatening symbols.”

Hamas’s military wing has been proscribed as a terrorist organisation in the UK since 2001 and is listed in Schedule 2 of the Terrorism Act 2000.

The Home Secretary, who spoke at a Community Security Trust business lunch on Monday, is in America for talks with her counterpart.