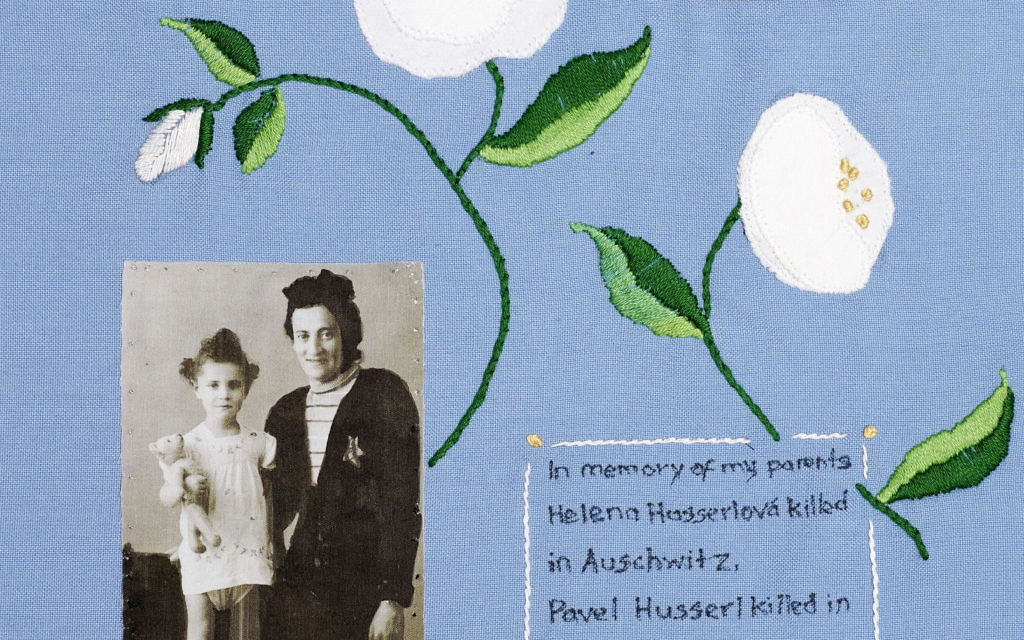 Undated handout photo issued by The '45 Aid Society of a quilt created by Zdenka Husseri, a holocaust survivor, which will go on display at the Jewish Museum in London to commemorate 70 years in the UK. PRESS ASSOCIATION Photo. Issue date: Thursday December 3, 2015. At the end of the Second World War, the British government offered to bring 1,000 orphaned child survivors of the Nazi concentration camps to the UK, but only 732 survivors were found, and although 80 of them were girls they became known collectively as "the boys'. See PA story ARTS Quilts. Photo credit should read: The '45 Aid Society/PA Wire NOTE TO EDITORS: This handout photo may only be used in for editorial reporting purposes for the contemporaneous illustration of events, things or the people in the image or facts mentioned in the caption. Reuse of the picture may require further permission from the copyright holder.

Holocaust survivors are commemorating 70 years in the UK by creating quilts which will go on display at the Jewish Museum.

At the end of the Second World War, the British government offered to bring 1,000 orphaned child survivors of the Nazi concentration camps to the UK, but only 732 survivors were found, and although 80 of them were girls they became known collectively as “the boys’.

The children were flown to the UK and rebuilt their lives, with many eventually settling here, while others left for North America, Australia and Israel.

To mark the 70th anniversary of their liberation “the boys”, their children and their families began to create “memory quilts” to remember their stories.

Each square serves as a reminder not only of lost families and communities, but of strength and survival as each of them found a new life in Britain.

This project has resulted in four separate quilts made up of 156 squares which will be on display at the Jewish Museum in London in a free exhibition, alongside stories of the lives they represent.

Aged six, Zdenka Husserl was one of the youngest children on a transport of 300 child survivors brought to England on August 15 1945, sponsored by the British philanthropist, Leonard Montefiore.

“I went back to Czechoslovakia in 1987 and I met up with two step-aunts. At that time my biggest question was whether a photograph of my mother existed. It took two years for one of my aunts to search the village where I was born to see if anyone had a photograph.

“Sure enough, there was a girl, whose mother had recently died, who looked through her mother’s photograph collection and found this very photograph. This has been stitched with love into my square,” she said.

Issued by The ’45 Aid Society, part of the quilt created by Zdenka Husseri, a holocaust survivor, which will go on display at the Jewish Museum in London to commemorate 70 years in the UK. Photo credit: The ’45 Aid Society/PA Wire

Joanna Milan (formerly Bela Rosenthal) also arrived on August 15 1945. She was taken to Theresienstadt in June 1943 as a baby and remained there until liberation on May 3 1945. Her father had already been deported to Auschwitz.

She said: “The square represents myself as a young girl alone arriving in a strange country. The bluebells remind me of the first spring in England where there were carpets of bluebells. It was such an amazing sight and the smell was overwhelming – it was the start of a new life.”

Abigail Morris, director of Jewish Museum London, said: “It is a great honour to be able to display these magnificent and moving quilts.

“The devoted nature of the group, who remained in close contact long after leaving their initial hostels around Britain, is recorded here, as are the individual stories of liberation and survival.”