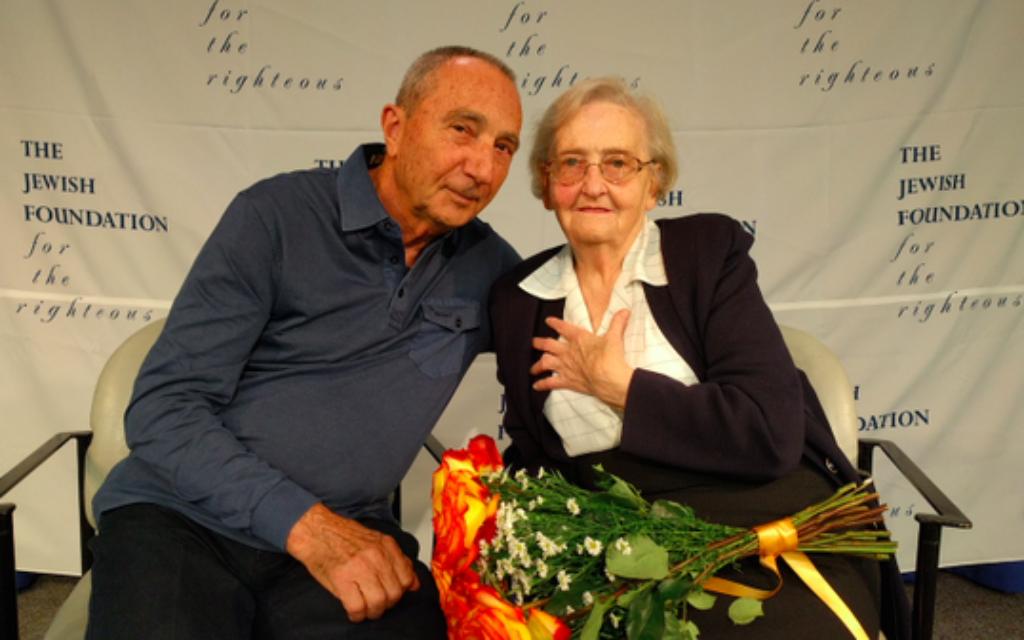 An Israeli man and a Polish woman have been reunited in New York 70 years after her Catholic family saved him during the Holocaust.

Michael Hochberg, 77, held hands with Krystyna Jakubowska, 86, at Kennedy International Airport, locking eyes as their relatives looked on. They were brought together by the Jewish Foundation for the Righteous.

Ms Jakubowska, who flew in from Warsaw to meet Mr Hochberg, said through a translator: “He was a very pretty boy and he was very good – no problems with him as a child.

“But I was scared, because the Germans announced on the street what would happen if somebody is saving a Jew.”

The punishment was death.

Ms Jakubowska’s family took Mr Hochberg in at four after he was literally thrown over the wall of the Jewish ghetto in Warsaw by a friend so as not to fall into the hands of the Nazis who herded hundreds of thousands of Jews there, many of them then sent to an extermination camp.

For two years he lived with Jozef and Rozalia Jakubowski, friends of his family, and their son and three daughters including Krystyna, then a teenager. The family made sure no one discovered that he was circumcised and therefore Jewish; most Christian babies did not undergo the procedure at that time.

Mr Hochberg had escaped just before the 1943 uprising that sent the ghetto up in flames he could see from the balcony of the Jakubowski apartment.

He never again saw his parents or grandparents, who all died, and he could never venture out of the apartment except at night.

“Very few people helped the Jews,” Mr Hochberg said. “In the Jewish tradition, you say, whoever saves one soul saves the whole world.”

Jozef Jakubowski, who fought against the Nazis as a member of the Polish underground, was killed in combat. The rest of the family was forced out of the city into the countryside, taking the boy along.

At the end of the war “I just hugged everybody, and I had to leave” said Mr Hochberg, who grew up in a Jewish orphanage in the town of Otwock, eventually moving to Israel,where he had three sons and eight grandchildren.

He and Ms Jakubowska met previously in Poland in 2006.

Mr Hochberg and his wife live in the Israeli city of Haifa and are now spending a month in the US. They also plan to visit Las Vegas and Miami.