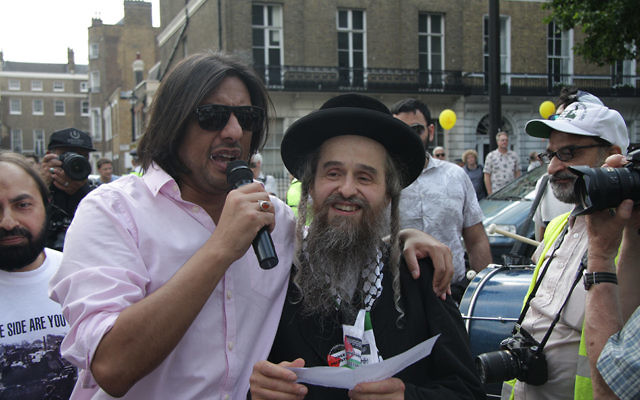 Nazim Ali (left) with an anti-Zionist rabbi from Neturei Karta

The High Court has ruled that a pharmacist and leader of the annual Al Quds Day march may have made antisemitic comments when he blamed “Zionists” for the Grenfell disaster.

The top legal body ruled today, that the original decision by the General Pharmaceutical Council’s (GPhC) Fitness to Practice Committee, that Nazim Ali’s comments in 2017 were “offensive” but not racist, must be quashed and reconsidered.

This comes after an appeal by the Professional Standards Authority (PSA), following outrage at the initial decision by the GPhC in 2019.

The appeal was prompted by complaints made by UK Lawyers for Israel in November, Campaign Against Antisemitism (CAA) in December shortly before the PSA’s findings were published  and after another Jewish community activist brought the case to the PSA’s attention.

According to CAA, in reaching his decision, Mr Justice Johnson noted: “In determining whether the GPhC has established that the remarks are antisemitic, the committee  should assess the objective meaning of the remarks…taking account of their meaning taken as a whole, and it should not take account of Mr Ali’s subjective intention; Mr Ali’s good character; and the reaction of other audiences in other contexts.”

The move was welcomed by the Board of Deputies who thanked the PSA “for taking the Nazim Hussain Ali case to appeal and welcome their success. The original decision seemed to create a loophole for antisemitism as long as intent could not be proven. The High Court has importantly stated antisemitism should be judged objectively, and also stated that allegations should be considered cumulatively. We welcome the General Pharmaceutical Council’s acceptance that the original decision was an error, and urge all professional bodies to accept these principles.”

Stephen Silverman, Director of Investigations and Enforcement at Campaign Against Antisemitism, said: “The High Court has agreed with us that the decision on whether Nazim Ali’s remarks at the pro-Hezballah ‘Al Quds Day’ march in 2017 were antisemitic was woefully inept. As we hoped, the High Court has now quashed the original decision of the Fitness to Practise Committee of the General Pharmaceutical Council in relation to Mr Ali’s antisemitism and ordered it to reach a new decision. This is exactly why we referred the matter to the Professional Standards Authority.

“We commend the Professional Standards Authority and the General Pharmaceutical Council itself for recognising the injustice of the earlier decision.

“We hope that in the new Fitness to Practise Committee decision will accept that Mr Ali’s comments were antisemitic and that on that basis the previous sanction was inadequate and wrong. The road to justice in this case has proved long and winding, but we are again heading in the right direction.

Duncan Rudkin, Chief Executive of the General Pharmaceutical Council, said: “We agree that the GPhC erred in its approach to deciding whether or not the comments made by Mr Ali were antisemitic and we did not contest the appeal by the PSA. We will make sure the learnings from this case and the High Court judgment are shared across the organisation and our committees. The further Fitness to Practise hearing for Mr Ali will be scheduled at the earliest opportunity.”