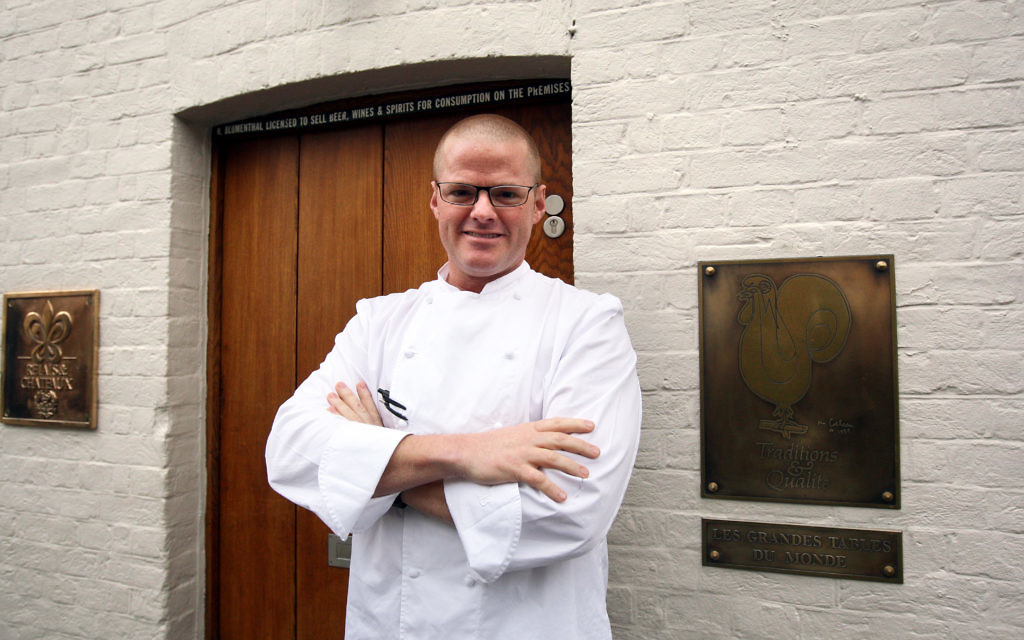 He’s the most famous chef in the world, but Jewish epicure extraordinaire Heston Blumenthal is not above giving out a few tips on how to add some fine-dining flair to Friday night dinners, or catering the odd bar mitzvah. Adam Kamien explains.

Heston ‘he MUST be Jewish!’ Blumenthal

The lineage of Heston Blumenthal has been a topic of fierce debate here at Pulse. Opinions in the office ranged from “100 per cent”, to “not even a little”, to “surely with a name like ‘Blumenthal!’”

“I know,” I thought. “I’ll use my finely honed journalistic prowess to get to the bottom of this confounding poser.”

And so I asked the internet.

A cursory Google search revealed the mad genius behind London’s legendary Fat Duck had indeed been written up in British Jewish publications. A promising start. Further investigation, however, led to wiki.answers and a resounding “no” to a question about Blumenthal’s Jewishness.

Sigh. A full 10 minutes of intensive web trawling and I was no closer to an answer. Perhaps we would never know.

One thing my research had turned up was that at the very least, no other religion had claimed him, so he was ours for the taking if we were so inclined.

Desperate for closure, (also it was getting close to lunch) I asked myself (no-one else was interested by this time): “Even if, according to the letter of the law, he’s not Jewish, couldn’t we just claim him?” We’re an edgy, progressive outfit here. Then I asked my editor. He said no.

But just when it seemed all hope was lost, Blumenthal came to town on a promotional tour and was doing interviews.

Finally. The man with eight Michelin stars and about as many TV shows could settle the argument that had sent me down the rabbit hole. Also maybe we could talk about some other things too.

Heston with his American Suzanne Pirret

First thing’s first: I’m delighted to announce, that after a grilling on the topic of his Jewish bona fides, it can be revealed in these very pages that Blumenthal is a big, fat Jew (metaphorically. He’s actually quite svelte for someone who works in food).

Yes, the self-taught modern master of multi-sensory molecular gastronomy is, in fact, one of us. Suck it, other religions!

“My mum converted, my dad was Jewish, had his bar mitzvah,” said Blumenthal, who is currently dating American food writer Suzanne Pirret, following the breakdown of his 20-year marriage to wife Zanna.

“I don’t speak Hebrew, apart from the obvious words, but I still consider myself Jewish. My gran was the archetypal Jewish grandmother.”

Despite this however, Blumenthal is no expert on Jewish cooking (though you get the feeling if he gave it a go he might be quite good at it).

But if his TV shows have taught us anything (in one episode of Fantastical Food he built a full-size, fully functioning pub inside a pie), he’s always up for a challenge.

So to brass tacks then: would he cater a wedding or bar mitzvah?

The short answer, quite staggeringly, is “yes”.

“It all depends on the circumstances and the amount of people and all that kind of stuff,” he says.

“I do always enjoy challenges. I tend to kind of push myself out of my comfort zone and I don’t always enjoy the feeling, but it kind of pushes you. If you just, sort of do what you do and stay with what you know, it’s comfortable, but I don’t think you really ever move on or grow. So if someone approached me to do a kosher wedding or a bar mitzvah, then I’d be quite excited about the challenge.”

Before you send the “Barmy by Blumenthal” invites off to the printers, we didn’t talk tachlis, but it’s probably safe to assume you’ll need finance.

Heston on Channel 4’s Jewish Mum of the Year

Blumenthal is as big a star as there is in food, but the most compelling part of his backstory is that his experience in commercial fine dining kitchens prior to opening the Fat Duck – one of the most acclaimed restaurants in the world – totalled around the three-week mark. It should be noted that the short stint was spent in the cauldron of the legendary Marco Pierre White’s kitchen at Canteen, but even so, some chefs toil for decades before going it alone and almost none of them enjoy Blumenthal’s galactic success.

In 1995 he opened the Fat Duck and by 2004 it had three Michelin stars. He opened Dinner at the Mandarin Oriental on Hyde Park in 2011; it was awarded two Michelin stars in the 2014 guide.

So now that he’s conquered every peak and has nothing at all left to prove, might he return to his roots?

Growing up, Blumenthal wasn’t exposed to much Jewish food, but he recalls being hosted by relatives who moved to London from Israel and says the family’s gefilte fish inspired his present day love of pickled and cured fish, even if his Michelin-starred versions are more carpaccio and confit kombu than pale blob and boiled carrot.

The father-of-three tells me he has never tried making matzah balls with liquid nitrogen or chopped liver ice-cream, though he admits it has occurred to him.

I ask him if he has ever considered opening a kosher version of his famous Fat Duck?

“I shouldn’t say this because it will probably come back and bite me in the bum, but I always said there’ll never be another Fat Duck. There might be a Fat Duck pop up, but if we were ever to do that I wouldn’t have two of them, we’d have to close the Fat Duck while I was doing it.

“The restaurant we opened in London [the two Michelin-starred Dinner], that was always designed with a view to do a few more internationally. That’s the whole concept of that, it was designed to be replicated. In terms of a kosher restaurant, that would be a little bit further down the list.”

Okay, fine, so no Kosher Duck, but how then can the average gastronomic greenhorn bring some fine-dining flair to Friday night dinners? While dressing up meat as fruit, or sourcing the main ingredient for snail porridge – both Blumenthal signatures – might be a bit beyond most dinner dabblers, the great man does have a few tips to help you take the weekly family catch-up from humdrum to haute cruisine.

“I did a show called How To Cook Like Heston and we used some of the techniques we used at The Duck to help people boost their own recipes. So if you’re doing a mince dish where you want to boost meaty flavours, even if you’re doing chopped liver … put a little star anise in with the onions then you’ll really boost the meaty flavours of the meat you’re cooking with.

“Also you could go down to the local party shop and buy some dry ice and make a smoothie, or a sorbet, or an ice cream. All you do is bash [the dry ice] up into a powder and then put your custard or your smoothie or your sorbet, or fruit juice in the bowl and just spoon in your dry ice and give it a stir. In a minute and a half, you’ll have instant ice cream and kids love it because there’s vapour going all over the place.”

And it’ll certainly set your Shabbat dinner apart from any other you may have experienced.