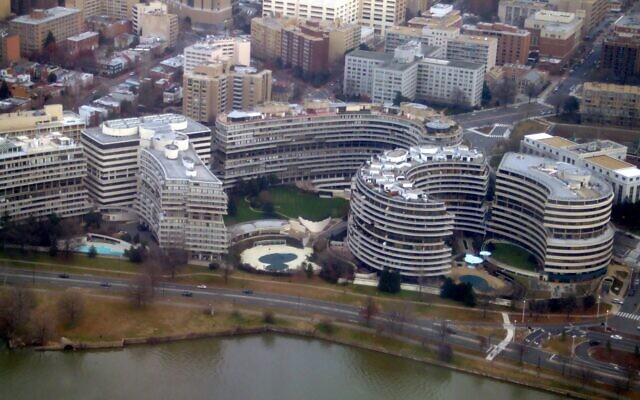 A photo of the Watergate Complex taken from a DC-9-80 inbound to Washington National Airport on January 8, 2006. (Wikipedia/Author Indutiomarus at English Wikipedia/ Indutiomarus.)

Harry Rosenfeld, a refugee from Nazi Germany who became the Washington Post editor who helped two dogged reporters expose the Watergate scandal, has died at 91.

His daughter, Amy Rosenfeld Kaufman told The Washington Post that her father died July 16 from COVID-19 complications, at his home in Slingerlands, a suburb of Albany, New York.

Rosenfeld was the assistant managing editor for metropolitan news in 1972 when Bob Woodward and Carl Bernstein were closing in on the scandal behind the bungled burglary at the Democratic campaign headquarters at the Watergate hotel in Washington, D.C. Their reporting would eventually directly implicate President Richard Nixon in the crime and the cover-up, and bring about his resignation.

As the parameters of the story’s seriousness grew clear, the Post’s editor-in-chief, Ben Bradlee, wanted Rosenfeld to replace Woodward and Bernstein with more seasoned reporters. But Rosenfeld wouldn’t stand down. “They’re hungry,” he told Bradlee. “You remember when you were hungry?”

The line was immortalised in the movie about the Post’s coverage of Watergate, “All The President’s Men,” by Jack Warden, playing Rosenfeld. (In the movie, Rosenfeld delivers the line to the Post’s managing editor, Howard Simons.)

He was born Hirsch Moritz Rosenfeld in Berlin in 1929 and witnessed the carnage of Kristallnacht, the Nazi-led pogroms, in 1938, seeing hoodlums burn his synagogue. In 1939, the United States approved his father’s application, made five years earlier, for the family to immigrate.

In his memoir, titled “From Kristallnacht to Watergate: Memoirs of a Newspaperman,” Rosenfeld admitted to resenting Bradlee’s privileged upbringing. “When he was a young kid, he learned to play” tennis, Rosenfeld wrote. “When I was a young kid, I dodged Nazis.”

He was raised in New York, and never lost his tabloid sensibility, the Post reported in the obituary.  The hard-driving editor acknowledged being abrasive. Bradlee demoted him when Rosenfeld published an expose of an extramarital affair between Bradlee’s sister-in-law and John F. Kennedy. Rosenfeld left in 1978 to become editor of the Albany Times Union, where he worked until he retired in 1996 and to which he contributed until his death.

Despite — or because — of the hard time he gave his reporters, some of them remained loyal to him.

“Harry was always the great, aggressive, hard-charging editor,” the Post quoted Woodward as saying. “But his message to his reporters was that we gather hard facts, listen to all and listen some more. Careful, patient listening was the key.”