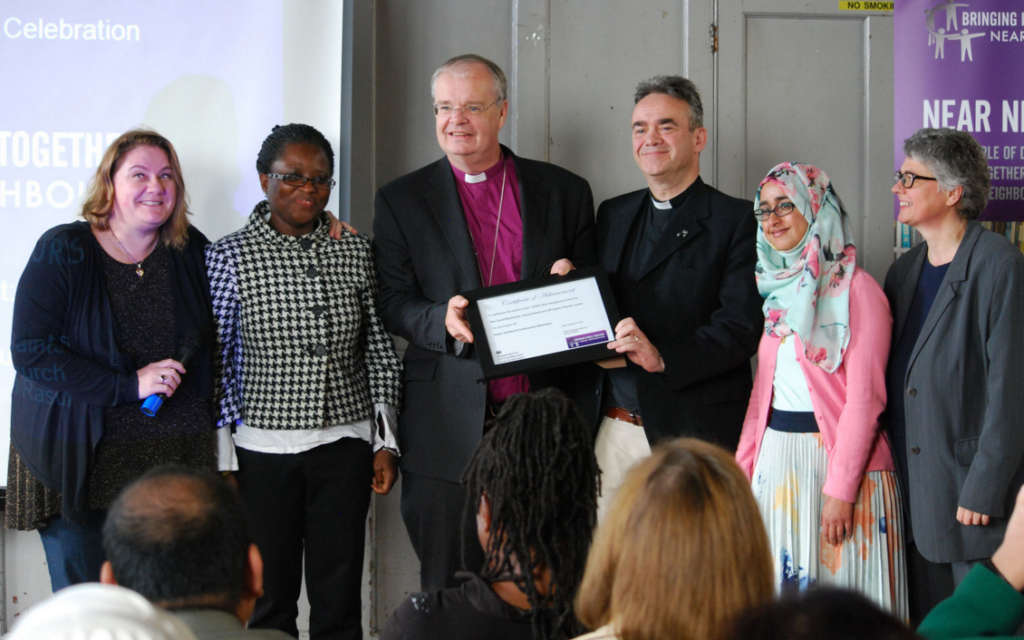 Near Neigbours celebrating its 1000th grant

Near Neigbours celebrating its 1000th grant

A national interfaith programme whose work has included community Hebrew classes and a peace project in Barnet has awarded its 1000th community grant – and has attracted praise from both the UK government and Austrian foreign minister.

Near Neighbours, founded in 2011, has now given a total of over £3.4 million to projects across England – many of them involving Jewish organisations.

The initiative is said to have benefitted 300,000 people – 97 per cent of whom said its work had enabled them to develop relationships with neighbours from different religious backgrounds – and aims to bring residents of religiously and ethnically diverse communities together in order to share work to improve their local communities.

Communities minister Baroness Williams last week paid tribute to its “fantastic” work, while Austrian Foreign Minister Sebastian Kurz – who accompanied Williams on a special fact-finding visit – cited Near Neighbours as a model example of “successful projects which bring people from every background together”.

Luton faith leaders at the Near Neighbours-funded peace garden

Its 1000th project, a Peace Garden in Luton, was given the green light last week – and Jewish communities have been among those to reap the dividends of its many successes.

A interfaith community project in Barnet, which will see local people from the Jewish, Christian, Hindu, Muslim and non-religious communities come together to build a peace mosaic, was launched as Near Neighbours’ 800th project earlier this year.

Edgware rabbi Natan Levy, who last year sought to build bridges between the Jewish and Islamic communities by fasting for Ramadan, said the Larches Trust initiative was “a great example of the work Jewish organisations are doing to help their communities and support their neighbours.”

The Board of Deputies interfaith and social action consultant added: “This small project, a tree mosaic, is a remainder of the potential within us all to create ‘trees of life’ that transform our neighbourhoods into Edens of hope.”

A programme of Hebrew classes attended by Jews, Muslims and Christians in Prestwich, Greater Manchester, was also funded by Near Neighbours.

Those enrolled in the course the course, taught by a local Rabbi and featuring traditional Jewish food, have praised its “great atmosphere”.

North and west London are among multi-faith areas to have benefited from a £3 million grant awarded to Near Neighbours by then Communities Secretary and Conservative Friends of Israel Chair Sir Eric Pickles last year.