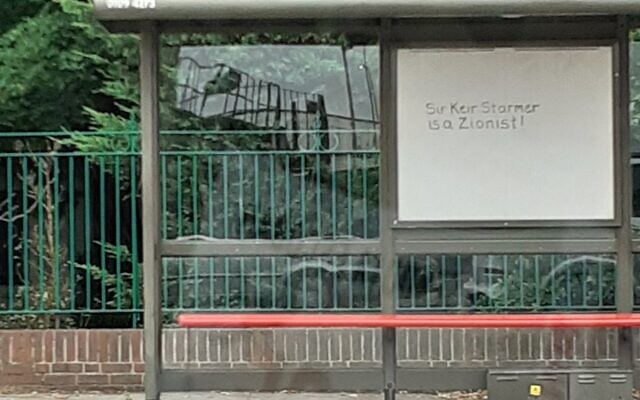 Graffiti branding Labour leader Keir Starmer a “Zionist” has been removed from a bus stop in west London.

On Thursday, journalist Etan Smallman posted a picture on Twitter of the defaced bus shelter on Hanger Lane in Ealing, which read: “Sir Keir Starmer is a Zionist!”

A Transport for London spokesperson said “the offensive graffiti has now been removed from this location and we are actively taking steps in an attempt to deter the offender from carrying out this again.”

During the Labour leadership hustings hosted at Liberal Jewish Synagogue, Starmer was criticised  after he declined to call himself a Zionist. Speaking to Jewish News, he said: “I do support Zionism… I absolutely support the right of Israel to exist as a homeland.”

Starmer explained: “My only concern is that Zionism can mean slightly different things to different people, and ..to some extent it has been weaponised. I wouldn’t read too much into that. I said it loud and clear – and meant it – that I support Zionism without qualification.”

Courteous to include the "Sir". And such nice handwriting pic.twitter.com/tvlfLaeG1v