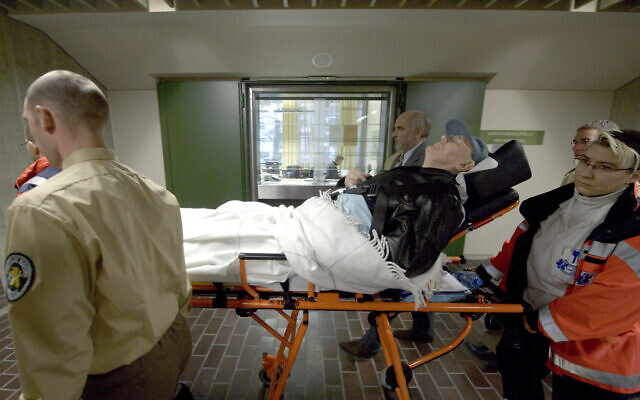 John Demjanjuk, formerly known as Ivan, was taken into court on a stretcher for his trial as a suspected Nazi war criminal. He was convicted of being an accessory to murder in 2011 (Photo: dpa)

German prosecutors are preparing over a dozen cases against suspected Nazi war criminals as they continue their pursuit of elderly men and women who worked in wartime death camps.

A 100-year-old man and a woman, 96, will face trial in the autumn while a further 15 cases are examined in states around the country.

Nearly all cases are for charges of being an accessory to murder by working at death camps.

The 100-year-old man will stand trial in Brandenburg, eastern Germany, for his service at Sachsenhausen where he was allegedly an accessory to 3,518 murders as a guard between 1942 and 1945.

He is also said to have been involved in the shooting of Soviet prisoners of war in 1942 and assisted the murder of other prisoners with the poison gas Zyklon B.

Separately, the 96-year-old woman is accused of being a secretary at the Stutthof camp.  She will be tried at a juvenile court in the northern state of Schleswig-Holstein because she was a teenager at the time.

“The passage of time is no barrier to justice when it comes to the heinous crimes of the Holocaust, and it is right that even now, the German authorities are pursuing cases relating to these dark acts,” said Karen Pollock, the chief executive of the Holocaust Education Trust.

“The Holocaust was a unique episode in our history where six million men, women and children were systematically murdered simply because they were Jewish. Many who survived were the only survivors of their families, towns and communities.

“We hope that these trials will help to ensure that the truth of the past is known, especially for the next generation, as well as bringing some comfort to the survivors who are still with us.”

The investigations come after Ivan Demjanjuk, later known as John Demjanjuk. The guard at the Sobibor extermination camp was successfully convicted a decade ago as an accessory to 28,000 murders.

His case set a precedent for other prosecutions.

There is no statute of limitations for murder and accessory to murder under German law.