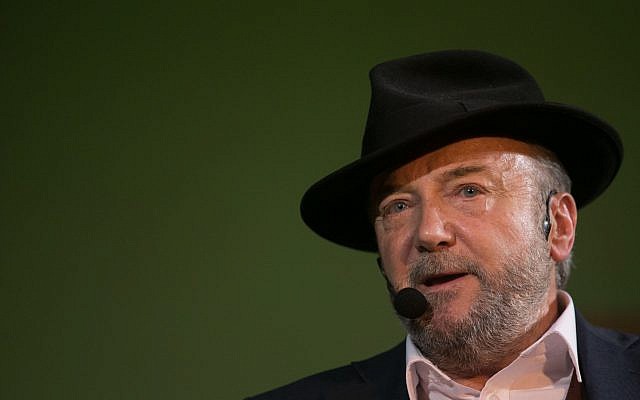 talkRADIO has sacked George Galloway for tweeting that Tottenham Hotspur Football Club’s defeat in the Champions League final meant “no Israel flags on the cup”.

The broadcaster said in a statement on Monday that it “has terminated George Galloway’s weekly show with immediate effect. As a fair and balanced news provider, talkRADIO does not tolerate antisemitic views.”

In response, Galloway threatened to take the broadcaster to court in a tweet. “I’ve just been sacked by by @talkRADIO. See you in court guys. #Palestine #Moats. Long live Palestine.”

This comes after the firebrand former MP took to Twitter after Liverpool’s historic 2-0 victory in Madrid, congratulating them and evoking their former manager and victims of the Hillsborough tragedy, but finishing his tweet with a jibe at Spurs’ supporters.

Galloway heralded “the great people of #Liverpool to the memory of the socialist miner #BillShankley [sic] to the fallen #96 to those who fought for justice for them and to the Liverpool dockers.”

He ended his tweet saying “No #Israël flags on the Cup!”

He was criticised by both clubs, with Tottenham giving the following statement to Sky Sports News: “It’s astounding in this day and age to read such blatant antisemitism published on a social platform by someone who is still afforded air time on a radio station on which he has previously broken broadcast impartiality rules.” 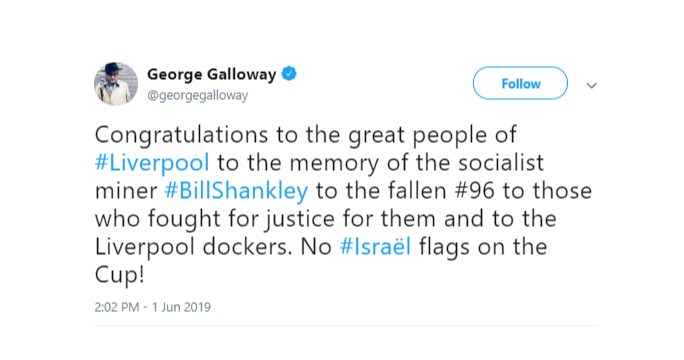 Head of Club and Supporter Liaison at Liverpool Football Club, Tony Barrett, hit out at Galloway, citing former Israeli players at the club.

Lord Sugar, former chairman of Spurs, tweeted: “If I sent out a racist tweet like @georgegalloway all hell would break loose. His tweet after the Spurs v Liverpool game were …No #Isreal [sic] flags on the cup. A swipe at the Jewish community who are Spurs fans.The man is low life an anti-Semite of the highest order.”

Congratulations to the great people of #Liverpool to the memory of the socialist miner #BillShankley to the fallen #96 to those who fought for justice for them and to the Liverpool dockers. No #Israël flags on the Cup!