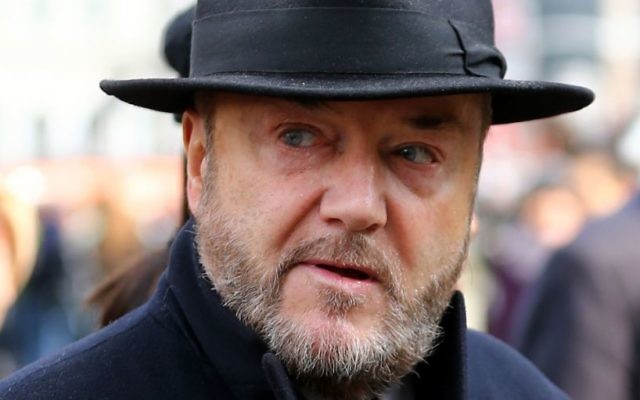 George Galloway has used a hustings event ahead of the Batley and Spen by-election to spread a fabricated claim that Israel this week “sprayed” the Al Aqsa compound with sewage.

Answering a question on what issues mattered to voters in the West Yorkshire seat, Galloway said: “Tens of thousands of people in this constituency deeply care for the dead and dying on the Gaza Strip – and care just as passionately that Israel sprayed Al Aqsa with sewage just 72 hours ago.

“I know that not everyone cares about that,  but there’s more than 20, 000 people who care about it very passionately indeed. I’m surprised it didn’t make its way into the Labour list here of issues that matter.”

A video of Israeli security forces spraying the area in front of Damascus Gate by Jerusalem’s Old City went viral over social media last Sunday after it was shared by a journalist who claimed that the video depicted spraying “sewage” at the “gates to al-Aqsa to discourage and disburse Palestinians.”

The claims have been exposed as false.

Byline Times correspondent CJ Werleman had claimed the “sewage spray”  incident took place at the “gates to al-Aqsa” when it had been the exterior of the Damascus Gate, one of the entrances to the Old City of Jerusalem.

Furthermore, his claim that “sewage” was sprayed at a crowd of Palestinians to avert a potential conflict was also wrong.

In reality Israeli forces had used a substance known as “skunk water” – made of food-grade ingredients, notably yeast, baking powder which gives off a smell that is similar to sewage. It has also been used to disperse crowds of Charedim.

After being challenged over his claim, Werleman said that the Damascus Gate is, in fact, the gate to al-Aqsa because it is the gate Palestinians use to enter the Old City to then worship at al-Aqsa.

He further added that skunk water is a “euphemism for a toxic waste water that takes on the smell and appearance of sewage”.

Meanwhile, Galloway also used the Yorkshire Live hustings event to support the protesters who forced a teacher at Batley Grammar School into hiding fearing for his life after showing students a caricature of the Prophet Mohammed.

He said he stood with the parents of the children who had been left furious that the cartoon had been shown to their kids.

Galloway said the teacher had “absolutely no right” to show the caricature, and described the image as “horrific” and “insulting”.

He added: “Don’t call it a cartoon please, it was a horrific, insulting depiction of the Prophet of Islam – if it would have been Jesus, I would have been outside the school gate protesting. 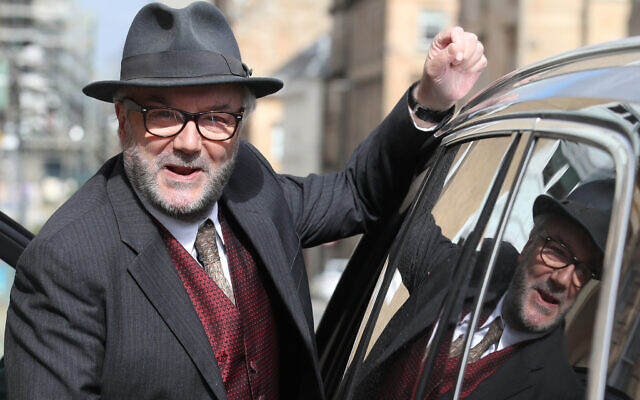 Numerous reports this week have confirmed that the claim about Israel spraying the Al-Aqsa compound with “sewage” have been proven false.

But that did not stop Galloway repeating slur at Wednesday’s hustings, which also featured Tory candidate Ryan Stephenson, Kim Leadbeater for Labour, and Corey Robinson of the Yorkshire Party.

Elsewhere in the hustings Galloway had attempted to suggest the Labour candidate was failing speak up for the Palestinians, and suggested Sir Keir Starmer would resign as leader if his party suffered defeat at the July 1 election. 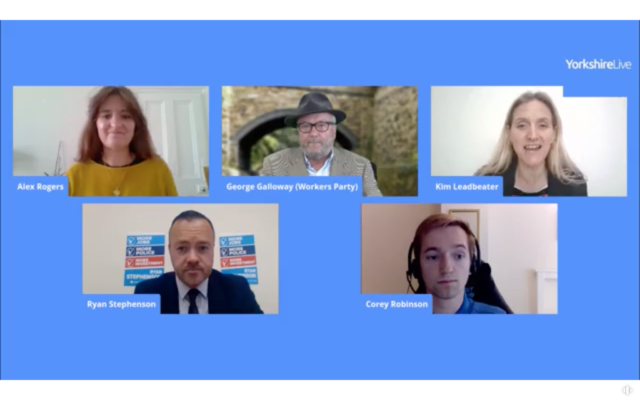 The hustings in action

Leadbeater said it was “catastrophic” the way that the constituency is “being used as a political football” ahead of the parliamentary by-election.

She also defended the party’s record on Palestine, saying Keir Starmer “has spoken out but it hasn’t cut through”.

She added: “There will be nobody who will fight more passionately about Palestine than I will.”

The Tory candidate said he would “speak up for Batley and Spen and I’m here to deliver my plan for more jobs, more apprenticeships, more police and more investment, and I need the government’s assistance to do that.”

Jewish News ran a special report from the seat this week, which revealed how Palestine was a major issue for Muslim constituents in the town of Batley.