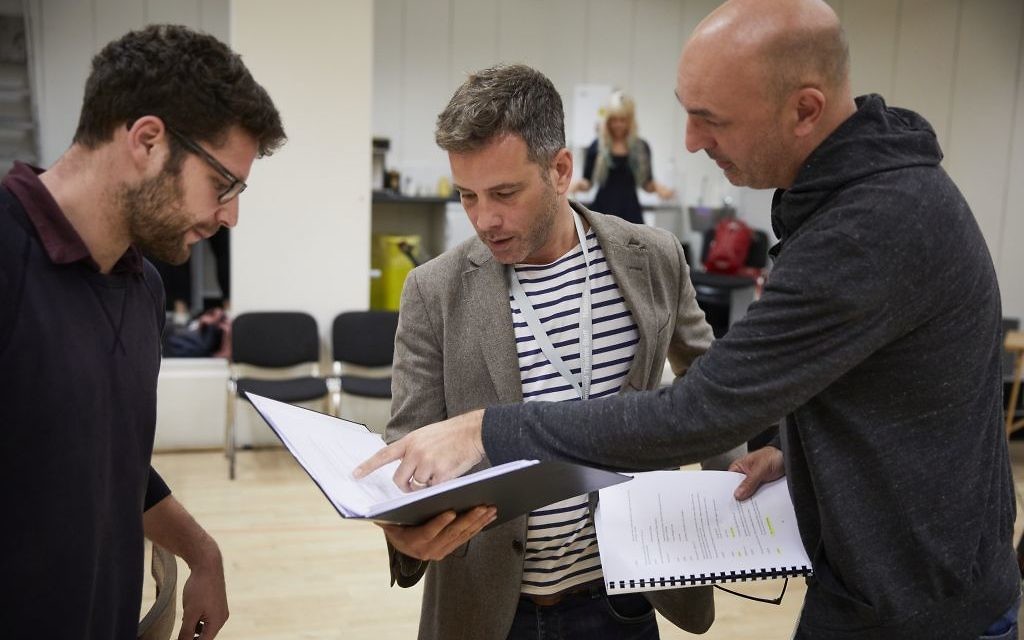 It is often said that art imitates life and nowhere is that truer than on the stage
of the National Theatre, where smash-hit political thriller, Oslo, opens next week.

Oslo’s writer, playwright JT Rogers, has spent the summer in London with a new cast after winning seven Best Play accolades for his New York production, including a Tony and the New York Drama Critics’ Circle award.

The slightly shell-shocked Rogers, an affable and diminutive figure with a trademark panama hat, laughs. “Well, I say I’ve done it now, I’ve got my entire career’s worth of awards.”

Oslo – for which Rogers is now writing a screenplay, as it is to become a feature film – tells the almost-forgotten story of the early 1990s back channel discussions between Israelis and the Palestine Liberation Organisation (PLO), which took place inside a castle tucked away in a forest, located outside the Norwegian capital.

The hitherto unthought-of negotiations led to the 1993 Oslo Accords and that famous handshake on the White House lawn between Yitzhak Rabin and Yasir Arafat, under the benevolent eye of then-US President Bill Clinton.

But, as Rogers admits, few Americans – himself included – realise these days that the talks were not brokered by Washington insiders, but by utterly self-effacing Norwegian diplomats, led by Terje Rød-Larsen and his wife, Mona Juul. Juul is presently Norway’s ambassador to the UK.

About four years ago, it was Rogers’ good fortune to meet Rød-Larsen after the diplomat had been to see another of Rogers’ plays, Blood And Gifts, which has also been staged at the National. 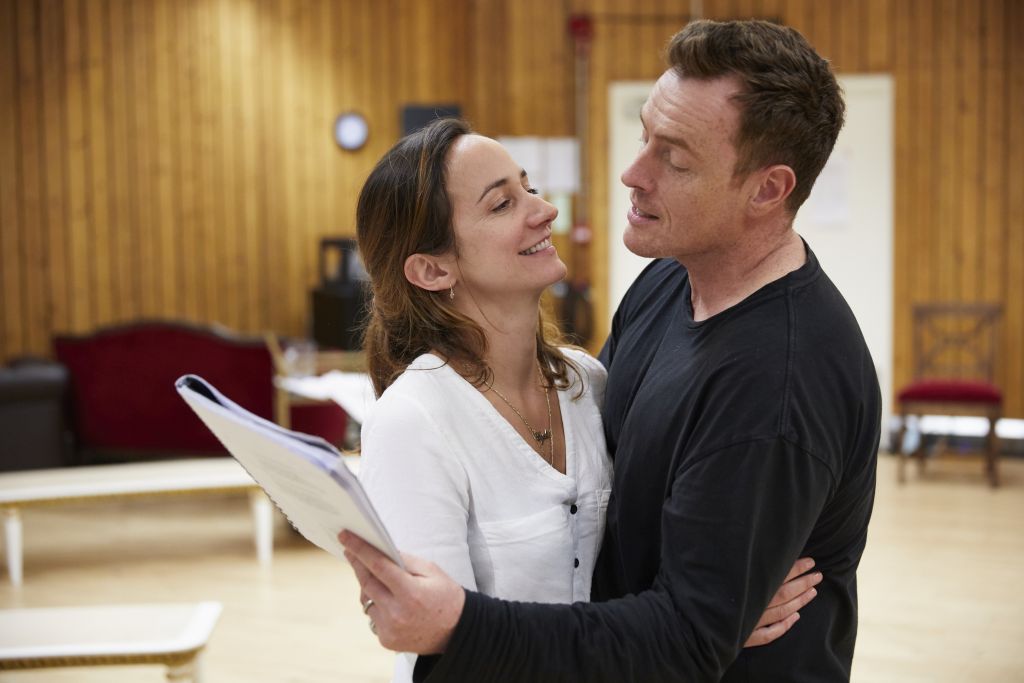 Bartlett Sher, that play’s director, knew Rød-Larsen and Juul through their children and suggested the outgoing playwright, who was looking for a new subject for his next play, should meet the diffident Rød-Larsen.

“So we met in a bar near the Lincoln Centre, where my play was running. We had some drinks, and Rød-Larsen was a typical diplomat, deflecting, saying, no, it’s not all about me. She (Juul), when I met her, was even more deprecating.

“But I consider myself a political junkie and I was both intrigued by these back-channel
talks – and chagrined that I knew nothing about them.”

Rogers told Rød-Larsen right away that he scented a subject for a play, and asked if he could come to Norway to see Oslo for himself.

He marvels, now, at Rød-Larsen’s generosity and “courage” in giving him a free hand to tell the story on stage.

“He said he trusted me, he knew my work, and I do think it was brave. Neither he nor his wife saw the play until they came to the theatre to see it. So it was a big deal,” he says. 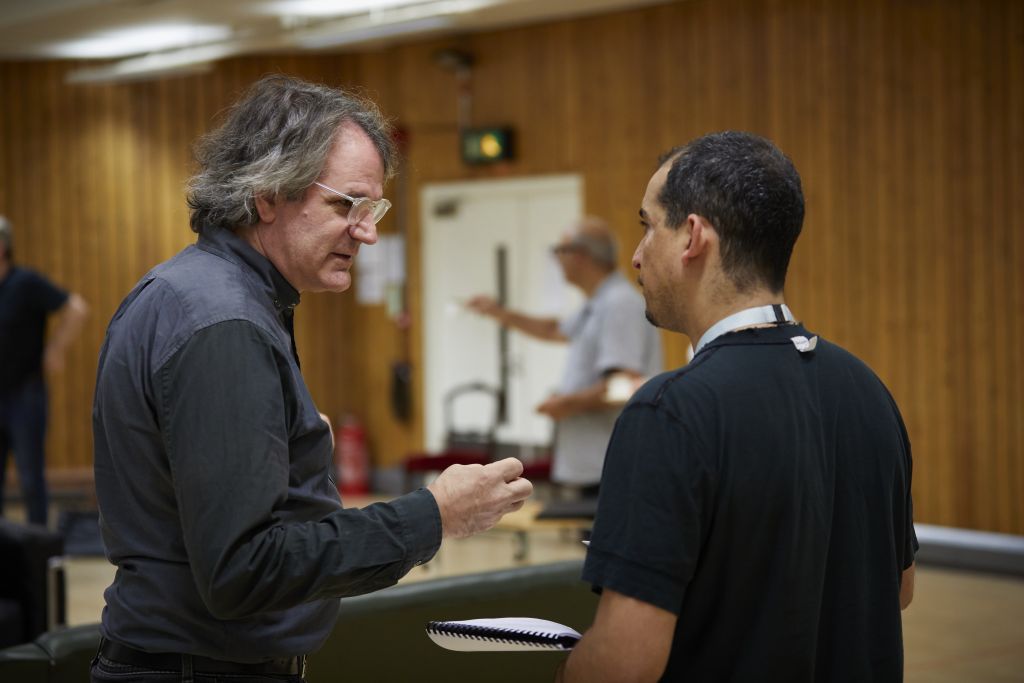 Two other big names went to see Oslo just before it closed in New York — former
President Bill Clinton and his wife, Hillary.

It became a must-see show – one night, the entire audience was composed of UN diplomats, journalists and politicians, with an onstage Q&A afterwards.

But Rogers is acutely aware of the difference between American and British audiences, not least for subject matter, such as the Middle East.

He is familiar with British theatregoers and says Brits “are much more of an aural culture; we’re a visual culture in the States”.

“Here (in Britain) there is an intensity to the listening in the audience, and you can sense people getting the lines, getting the jokes,” he explains. The other big difference, and to an extent, the play’s “hot potato-ness”, is an entirely opposite approach to the Middle East.

Rogers, who is not Jewish, has written a play that is not a history lesson, but an absorbing and massively entertaining account of a focal point in the story of Israel and the Palestinians.

Nevertheless, he acknowledges, “it’s so difficult to talk, let alone write about this subject in New York”.

With entrenched positions being loudly embraced every day, Rogers felt the Norwegian aspect was his “aha!” moment, allowing him to explore the issue from a neutral angle.

All the onstage action takes place in Norway and we see the discussions between people who had not met before through the slightly exasperated eyes of the Scandinavian, logical diplomats, unused to the hot tempers of the protagonists.

In Britain, Rogers recognises, the take on the Israel-Palestine issue is “almost 180 degrees the opposite of that in New York”.

“In New York, the energy and the advocacy is about ‘whither Israel, whither the Occupation’ and a ferocious defence of Israel, rather than an attack on Palestinian statehood,” he reveals.

“In London, it seems the default position is upholding the rights and political advancement of the Palestinians, and Israel is ferociously criticised.”

While we, the audience, may know what happened after Oslo, the play observes very strict boundaries.

And with that, Rogers bounces off to rehearsals, effectively working on a brand-
new play.

υ Oslo runs at the National Theatre from 5 to 23 September and then transfers to the Harold Pinter Theatre from 2 October to 30 December. Details: nationaltheatre.org.uk/shows/oslo