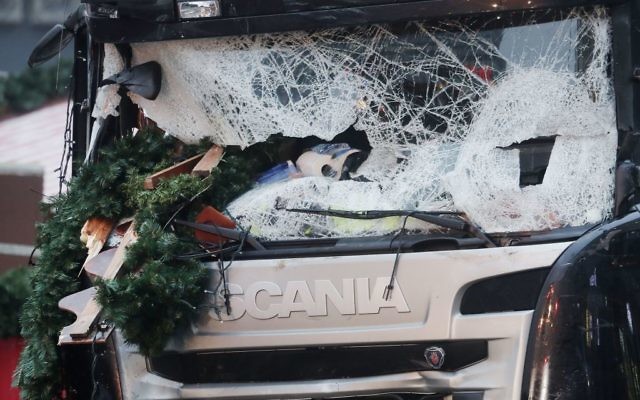 The chief rabbi of France, Haim Korsia, offered condolences to the people of Germany following an apparent terrorist attack in Berlin.

At least 12 people died and dozens were wounded in the incident Monday evening, which police representatives in Berlin said was likely a “deliberate attack.” It involved a truck that hit pedestrians at a Christmas market at the Berlin square of Breitscheidplatz outside Kaiser Wilhelm Memorial Church, the Associated Press reported.

“With all my heart with the people of Berlin and all the people of Germany,” French Chief Rabbi  Haïm Korsia  wrote on Twitter. “My prayers accompany you,” he wrote, adding the hashtags #Berlin, #Breitscheidplatz and  “#ichbineinBerliner” —  a quote which means “I am a Berliner” from  a 1963 speech by U.S. President John F. Kennedy in West Berlin.

German chancellor Angela Merkel said she is “shocked, shaken and deeply saddened”. She told reporters it would be “particularly sickening” if it turns out the attacker was an asylum-seeker who sought refuge in Germany.

German media have reported that a suspect arrested after the attack was a Pakistani citizen who came to Germany in late 2015 or early 2016.

This incident follows a similar attack in July in which more than 80 people died and hundreds were wounded in Nice, France, where an Islamist drove a truck through a crowd of people on a busy promenade.

After the July 14 incident in Nice, the Islamic State terror group claimed that the attacker, Mohamed Lahouaiej Bouhlel, was one of its “soldiers.”

Footage from the scene of the incident in Berlin showed the black truck with its front end wedged between the market stalls amid upturned boxes and crates.

In recent months, Western European intelligence agencies added some churches to list of at-risk locales which for years have included synagogues and other Jewish institutions.