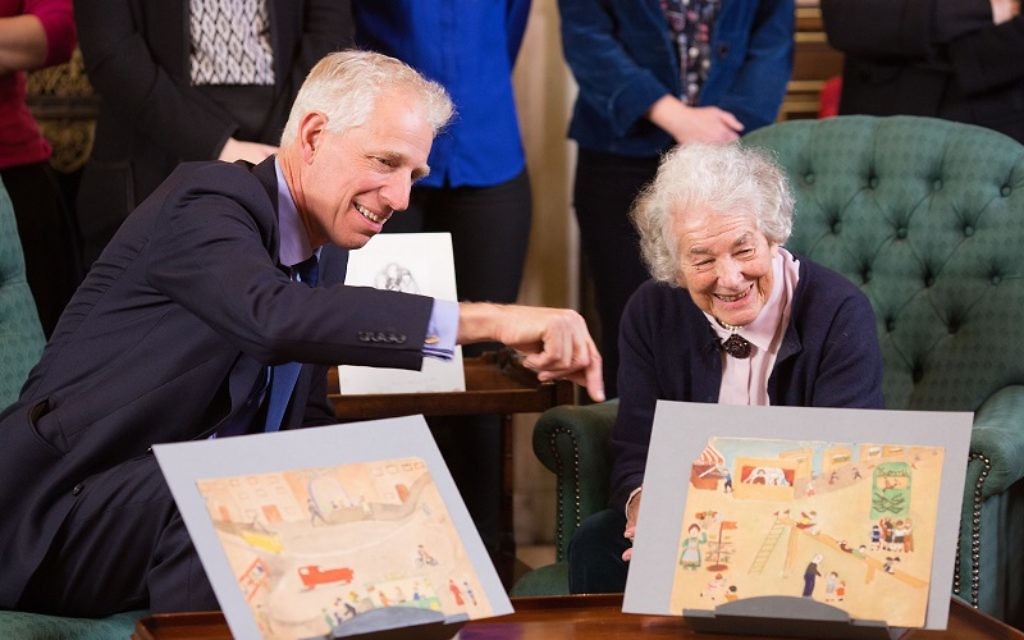 Children’s writer, Judith Kerr, author of ‘When Hitler Stole Pink Rabbit’ , with some of her childhood sketches. Kerr and her family escaped to Britain in 1933. Antiques Roadshow is dedicating a special programme to Holocaust Memorial Day. Credit: BBC/Anna Gordon

It’s just over three years since I went on a press trip to Yad Vashem and was knocked sideways by the astonishing contents of the archives, housed beneath the main building in an area not open to the public.

There, side by side with a teddy bear that had somehow survived the war years, were the original IBM computer cards for the Mauthausen concentration camp, with the reason for imprisonment recorded on every card: “Hungarian Jew”.

We saw two halves of a photograph of two Jewish women which had been meticulously rejoined, years after being ripped in two (one woman died, the other survived); we saw a diary in Romanian, signed by every pupil who had been taught by the man who had written it and kept for years by his widow, who could not read the language.

How, I asked, do you get this material? The archivist told me experts from the museum take to the road a couple of times a year, advertising ahead that they will be arriving in an Israeli town.

Under the banner Gathering the Fragments, the staff from Yad Vashem invite survivors — or, more usually these days, their families — to bring forward objects of interest to be assessed.

Where possible, people are asked to donate material to Yad Vashem, but where this cannot be done, the experts make scans and copies. Whichever the case, people are given some better idea of the jigsaw pieces that make up the Holocaust.

I asked if this venture had ever taken place outside Israel, and was told it had not. So I asked if Yad Vashem might consider holding a Gathering the Fragments event in Britain, a place with just the right kind of critical mass of survivors and refugees. 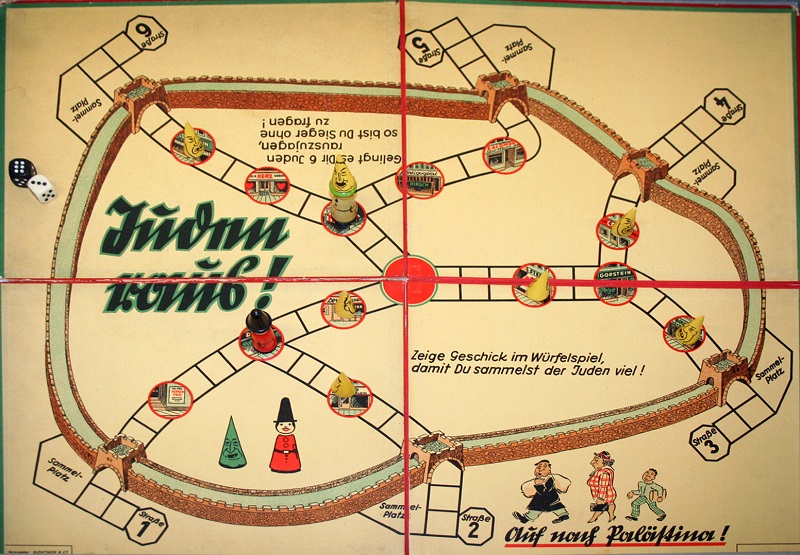 The aim of the Jews Out board game involved players trying to land on Jewish businesses and round up Jews to expel them. Credit: The Weiner Library

Britain also had one more element that I thought important: the numbers of Jews who were allowed in to the country before the war on domestic visas, many of whom had married into the general population.

There must be, I thought, descendants of those Austrian and German Jews who had material they did not understand and didn’t know what to do with.

Everyone I spoke to in the ensuing two-and-a-half years agreed that it was a great idea, but no one could quite make the moves to make it happen.

Then last April — after sustained nagging on my part — I was introduced to a civil servant at the Cabinet Office who was involved in Britain’s Holocaust Memorial Foundation, which is due to build a memorial and learning centre in the parliamentary area.

We met several times while I outlined the idea and — flippantly, I admit — told the civil servant that a friend of mine had characterised Gathering the Fragments as “Antiques Roadshow Meets the Holocaust”.

A lightbulb appeared to have illuminated over her head. She would, she said, get on to the BBC right away.

This is why I found myself, on a cold November morning, in the gold rococo surroundings of the Foreign Office’s grand Locarno Rooms, where the resulting special Antiques Roadshow was being filmed.

Separately from my idea, the Holocaust Memorial Foundation had already commissioned TV presenter Natasha Kaplinsky to interview just over 100 survivors and rescuers, whose brief testimony will be interspersed with the programme.

On a plush Foreign Office couch lay a folded pair of striped trousers, worn by a man named Joe on the day of his liberation from the Auschwitz concentration camp

Regular Antiques Roadshow presenters Fiona Bruce, Mark Smith and Paul Atterbury floated among the survivors present, some of whose stories they already knew.

At regular intervals, one could hear voices shouting “Natasha!” as people strove to attract the newsreader’s attention.

Several survivors appeared to have been invited along at the last minute merely to display their yellow stars: it’s fair to say they weren’t thrilled about this.

But for those who were able to relate their stories on film, the opportunity was a once-in-a-lifetime one.

They included Naomi Gryn, daughter of the late Reform Rabbi Hugo Gryn, who had brought silver Judaica buried in the garden of their home in Carpathia by Hugo’s brave mother, Bella.

She survived the war and was subsequently able to dig up the chanukiah, Kiddush cup and silver candlesticks, all of which are still in use today by the Gryn family.

On a plush Foreign Office couch lay a folded pair of striped trousers, worn by a man named Joe on the day of his liberation from the Auschwitz concentration camp.

A visibly-shaken Bruce spoke to Joe’s widow, Sybil, who now lives in Edgware. She said she had never been able to get rid of the trousers, as they were so much a part of her husband’s life.

In an anteroom, two women produced some grisly “jewellery” made in Belsen and presented to their uncle, a chaplain with the liberating forces in 1945.

The Wiener Library’s Ben Barkow brought a repellent board game, Jews Out, one of three such copies held by the library; and, in a note of hope, Julia Burton and Sue Bermange of the ’45 Aid Society brought the four extraordinary Memory Quilts, which represent the lives of “the Boys”, the 732 Jewish orphans taken in by Britain after the war.

The programme is not what Gathering the Fragments aims to be — but it is a meaningful look at some of the objects that formed the framework of the Holocaust.

It seems a shame that many of the stories will remain untold on the programme — but perhaps this is a worthwhile project for the future, and the planned British Holocaust Memorial learning centre.

Antiques Roadshow Holocaust Memorial will be screened on Sunday, 15 January at 7.30pm, on BBC1