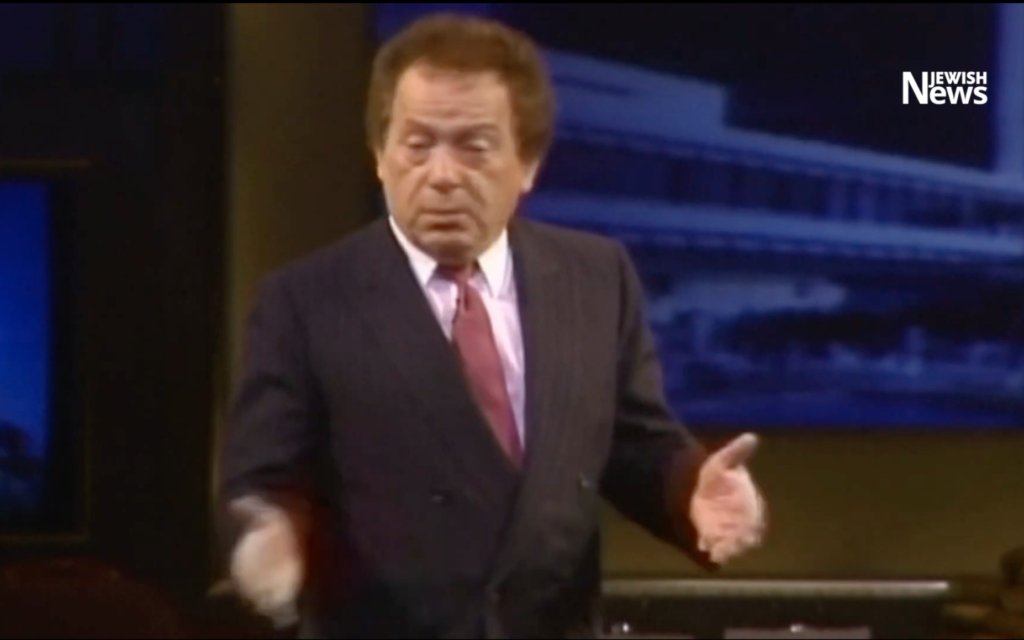 Screenshot of a Jackie Mason performance

Jackie Mason, who died Saturday at 93, didn’t always set out to be a comedian. In fact, it wasn’t until he was 30 that he left behind the Orthodox rabbinate for irreverent open-mic nights.

Mason, born Yacov Moshe Maza to Orthodox parents, was one of the last survivors of the Borscht Belt comedy circuit that propelled a host of Jewish funnymen, including Jerry Stiller and Rodney Dangerfield, from the Catskills resorts that catered to Jewish vacationers into the American popular imagination.

His comedy, delivered in a distinctive cadence inflected with the Yiddish of his childhood on the Lower East Side of Manhattan, offered a window into the American Jewish psyche for non-Jews and, for Jews, held up a mirror that reflected their complicated relationship with their Americanness.

“The only persecution that I ever suffered from in my career was from Jews that are embarrassed that I am so Jewish,” he said in one routine in which he lamented that American Jews say they are proud to be Jewish but also change their names and noses to obscure their Jewishness.

Mason was a complicated figure. Many of his jokes treated women crudely, and he characterised himself as a womaniser; he refused to acknowledge a child born from one of his relationships. He also spoke derogatorily on multiple occasions over the years about Black politicians, including by using a Yiddish epithet to describe President Barack Obama in 2009. “I’m an old Jew. I was raised in a Jewish family” where that epithet was used, he said in his defence at the time.

For many years, he supported Meir Kahane, who as the founder of the Jewish Defence League organised violent efforts to combat antisemitism and lobbied to expel Arabs from Israel.

Here are four videos that showcase Mason’s wit turned on his own people.

In this clip from a performance in Israel, Mason makes fun of American Jews who he says desperately seek to assimilate despite proclaiming pride in their heritage. “Jews in the United States move into neighbourhoods where there are no Jews allowed,” he jokes. “There’s nothing but Jews there. Each one thinks he’s the only one.”

The joke about Jewish diners complaining about the food and also the portion sizes wasn’t Mason’s, but it might as well have been. In this skit, he characterises Jewish diners as domineering and picky, contrasting them with non-Jews who he said accepted whatever seats and food they were given.

One of Mason’s most memorable acts was a standup routine based on his own life called “The World According to Me.” Within the first minute, he references his Jewishness in the context of the performance being a one-man show. “It disturbs a lot of people,” he said. “A lot of people say, who is a Jew to be making such a comfortable living?”

Rabbi Krustofski on “The Simpsons”

Mason was a regular on “The Simpsons” as the voice of Rabbi Krustofski, Krusty the Klown’s father. In this scene, he voices the character telling his son that comedy is an inappropriate career for someone in an observant Jewish community who comes from a distinguished line of rabbis — someone much like Mason himself.