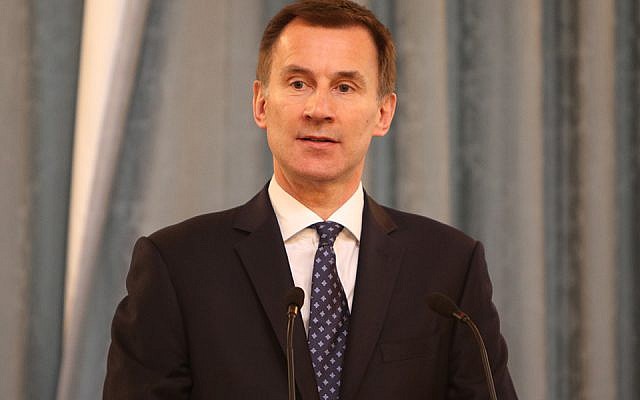 Hunt, who is believed to be among the frontrunners to succeed Theresa May as prime minister, made the remarks on Twitter in reaction to the German parliament’s decision to label the Boycott, Divestment and Sanctions (BDS) movement “antisemitic”.

In response, Hunt tweeted: “Tremors, turbulence & terror in Mid East remind us of urgent need for peace: two-state solution. But the foundations for peace are respect & coexistence. Boycotting Israel – the world’s only Jewish state – is antisemitic.”

He added: “I salute Germany for taking stand.”

Tremors, turbulence & terror in Mid East remind us of urgent need for peace: two-state solution. But the foundations for peace are respect & coexistence. Boycotting Israel — the world’s only Jewish state — is antisemitic. I salute Germany for taking stand.https://t.co/HYa90uY1zC

It appears to be an evolution in Hunt’s thinking on BDS. He earlier said: “I do not believe that imposing sanctions on Israel would be a constructive step… the best way to combat the BDS movement is through discussion rather than proscription.”

Politicians from several major parties in the Bundestag on Friday made Germany the first European country to pass such a motion. They said the campaign to boycott Israeli artists and goods was “reminiscent of the most terrible chapter in our history,” when the Nazis urged people not to buy from Jews.

However, an open letter signed by 60 Israeli academics had earlier urged them not to pass the non-binding motion, arguing that the BDS movement was political rather than racist, and that attempts to portray it as antisemitic were “deceitful”.

They added that statements and actions supporting BDS were “protected by freedom of expression and freedom of association, as enshrined in the Charter of Fundamental Rights of the EU”.

“There is no parallel in the world to this phenomenon of hypocrisy and ungratefulness, in which these professors earn their living at the expense of the Israeli taxpayer yet at the same time work to boycott and slander them,” said Peleg.

The motion was softer than one proposed by members of the far-right Alternative für Deutschland (AfD), which wanted a complete ban on BDS. Jürgen Braun, an AfD parliamentarian, said it showed that his party was the true friend of Israel, adding: “Antisemitism comes from the left and Islam.”