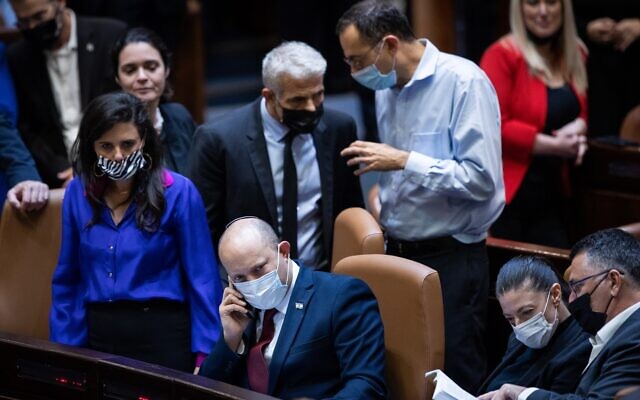 Israel’s fragile unity coalition suffered its first defeat after plans to extend a ban on Palestinians receiving Israeli citizenship were rejected by MKs in the early hours of Tuesday.

The citizenship law, which prevents the Palestinian spouses of Israeli citizens from gaining permanent residency or citizenship, was dropped after it did not secure enough votes.

Critics including left-wing and Arab politicians have long described the law as a racist measure designed to prevent Israel’s Arab minority from growing.

But it was rejected on Tuesday because right-wing politicians in the Knesset were split, with many voting to oppose it in a bid to destabilise the coalition — even though they supported the bill in principle.

“There are some things you don’t play with. The nation needs control over who comes in,” he said on Monday. “National security is a red line.”

The citizenship law was first enacted in 2003 during the second Palestinian intifada but has been continually renewed every year since, even after the uprising wound down.

It denies a route to Israeli residency and citizenship for Palestinians married to Israeli citizens if they come from Gaza, the West Bank or East Jerusalem.

Thousands of families are affected, such as Taiseer Khatib, whose wife of 15 years comes from Jenin in the West Bank but frequently applies for short-term permits to live with him and their three children in Israel.

“There’s no need for this collective punishment just because you are Palestinian,” he told Associated Press.

The defeat for the government came despite a late-night deal between the coalition parties that would have extended the law by six months instead of a year.

Left-wing and some Arab MKs supported the bill in this form because it gave MKs time to create an alternative system.

But 59 MKs voted in favour and 59 opposed the compromise, while two from the United Arab List abstained, meaning the original law expired at midnight without a replacement.