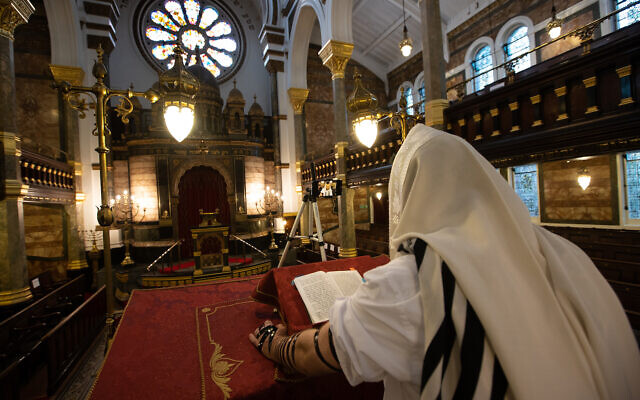 The United Synagogue can expect to see a modest fall in attendance at in-person services post-pandemic, according to a landmark survey which also shows nearly a third feel more connected to their communities now than before covid.

The results of  survey of more than 5,400 adult members – conducted in May – shows a vast majority intend to continue to physically attend services as they did before. But 19 percent said they were a little or much less likely to attend weekday services than previously, with 16 and 18 percent saying likewise for Friday night and Shabbat morning prayers.  The equivalent numbers for respondents more likely to attend is three, six and 10 percent.

For Rosh Hashanah, however, slightly more said there was an increased likliehood of them turning up at shul than before –  nine percent compared to seven percent who thought it less likely in the post-covid era.

In results that are likely to play a big role in planning, 58 percent said they would rely on a ‘hybrid’ mix of online and in-person activities after Freedom Day, with just 17 percent wanting in person activities only. But nearly a fifth of members said they don’t see themselves attending their community’s events at all post-lockdown whether in person or online.

One of the most striking responses came to a question about how connected members feel to their communities as lockdown eases.  Nearly a third – 31 percent – felt more connected compared to 25 percent who replied they were less so. Thirty percent said their involvement increased through online activities, with 53 percent participating just as much during the pandemic.  Around seventeen percent said they had participated less in their shul’s activities as physical building closed during lockdown.

Asked about overall satisfaction, which remained largely the same across all age groups, 86% said they were satisfied with the work of their community during the pandemic – thought this figure was higher among older respondents than younger ones. There was a 92 and 85 percent satisfaction rate for services and welfare respectively.

The Chief Rabbi, Ephraim Mirvis, praised the hard work of rabbis, rebbetzens and staff members throughout the pandemic.

“The responses from members show that our Shuls are so much more than buildings in which people gather for prayer,” he said.

While saying the movement should be “extremely proud” of the results, US President Michael Goldstein said: “We cannot rest on our laurels, nor can we ignore the areas where our members have told us we can improve. The results will help us plan for the High Holy Days and beyond.”

Among the key areas to improve is children’s programming, according to the survey, with 40 percent of those with children saying they were dissatisfied with the level of provision.

The movement has now pledged to work to understand how it can improve its services for youngsters in the wake of the pandemic. “We know that given it was not permitted by the government for youth services or activities for young people to take place in person, the score of 60 percent satisfaction is not unexpected,” said Richard Marcus, the movement’s Head of Impact.

“However, with the data in our hands it helps galvanise the whole organisation from youth workers to Rabbis to reconnect and engage as we move past the pandemic restrictions.”

The survey,  answered by almost 15 percent of the US’s 37,000 members, was described by communications chief Richard Verber as the “biggest listening exercise” in its 150-year history. It comes after the movement unveiled new guidelines for its shuls on mask-wearing, services and social distancing.

The rules state a distance of at least 1m must be maintained, or masks must be worn – although it recommends keeping distance even if masks are worn as good practice

It leaves much else to individual synagogues to decide, including on whether to have masks-only zones in shul.