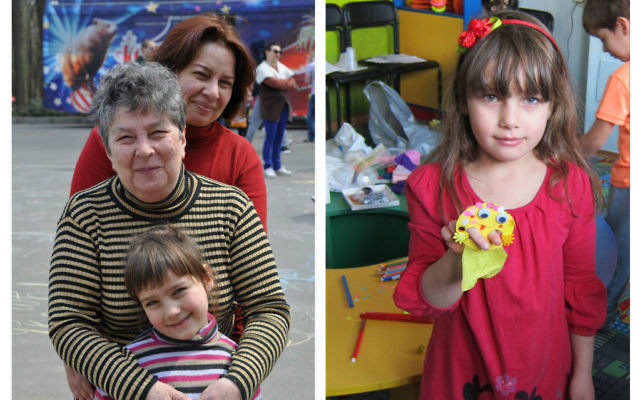 Left: The Metlyaev family in a local park. Right: Nastya Metlyaeva at a 'hand-made workshop'

Nastya was only five when war destroyed her life. “We had to leave our home suddenly. I was frightened and I cried a lot,” she recalls. “I asked my mummy where we were going and she said she didn’t know but that we would be OK. We had to leave everything there, even my favourite dolls and teddy bears. It made me very sad.”

Just two years before that, life in Donetsk looked very different. In summer 2012, England fans packed the Donbass Arena and roared their team to a 1-0 victory against Euro 2012’s co-hosts, Ukraine.

Since then, Ukraine’s second-largest football stadium has fallen silent. The $400million arena stands empty, one of the many casualties of the war in the east of the country.

Donetsk airport, which had seen a record number of passengers in 2013, lies in ruins after months of battles.

Beyond the buildings, the human impact is devastating. More than 9,000 people have died during the two years’ war that has been raging in eastern Ukraine. The Jewish population of Donetsk has dwindled from 10,000 to just a few hundred. Even the rabbi has left.

Across eastern Ukraine, two million people have been forced from their homes. Thousands of Jews are among them, like Nastya’s family.

Many have fled to Russia but most have tried to make new lives for themselves elsewhere in Ukraine including the Metlyaeva family: Tamara, 70, her daughter, Olga, 45, and her daughter Nastya, who is now aged seven. They left Donetsk after the fighting started.

Nastya and her family hold an unusual status under international law. They’re not refugees as they haven’t fled their own country and so are not entitled to any protection afforded by UN conventions. But they’re not quite regular citizens either, as they haven’t chosen to move homes willingly. Instead they inhabit the twilight zone where each person is labelled an ‘internally displaced person’ (IDP).

Today, Ukraine is still home to hundreds of thousands of Jews, perhaps as many as now live here in the UK.

Before the war began, charities such as World Jewish Relief already had a heavy caseload, supporting vulnerable Jews in Ukraine. Now there are also large numbers of Jewish IDPs in urgent need of housing, school places and access to healthcare. The pressures on the infrastructure are huge.

“Donetsk was all we knew,” Olga says. “It was our home. Everyone we loved lived there. The war has destroyed our whole life.”

Out of nowhere, their daily routine began to be punctuated by heavy artillery shelling. They had an impossible choice to make.

“We could either stay in Donetsk and protect our home and risk being killed,” says Tamara, the matriarch of the family. “Or we could run away to an uncertain future.”

In the summer of 2014, as the war intensified, the family made the decision to flee Donetsk. “We left behind our flat, our money and nearly all our possessions. We escaped with just a few bags – whatever we could carry.”

Tamara and Olga had been forced to quit their jobs, abandoning the family’s only source of income. “After we left,” says Tamara, “we had no way of earning money. We didn’t receive any support from the government.”

All their close family and friends lived in Donetsk, so Olga decided to try her luck with a distant friend in Kharkov, some 200 miles away, who had said they could live with him.

“What a mistake that was,” reflects Olga, ruefully. “My friend took us in – I really didn’t know him so well – and he turned out to be an alcoholic. He threw us out on to the street – even my mother, a widow, and my little Nastya. We didn’t know what to do or where to go. We had nobody and nothing.”

Eventually the family found themselves shelter in a camp for IDPs in Kharkov. Desperate for help, afraid and disorientated, Tamara and Olga approached the Jewish community centre, which directed them to World Jewish Relief’s Livelihood Programme.

The programme was featured in Jewish News last year and was set up to help vulnerable Jewish people in Moldova and Ukraine to break the cycle of poverty by finding them work.

Following the conflict in Ukraine, the programme has had to adapt to help Jewish IDPs like Tamara and Olga begin new lives.

“Being without a job was terrifying,” says Olga. “I had worked my whole life and suddenly found myself unable to look after my family.”

For the Jews of Ukraine, work isn’t only a means of being able to put food on the table. It gives families the dignity of being role models for their children and enables parents to say ‘yes’ to buying a chocolate bar after months or even years of saying ‘no’.

Tamara and Olga were given psychological support to help them begin to make sense of what had happened to them. They enrolled in a job search course, allowing them to become familiar with the job market in Kharkov.

“I am a doctor,” says Olga. “Or was a doctor back in Donetsk,” she says, correcting herself. “After completing the World Jewish Relief programme I was employed as a cardiologist by a local clinic.” Tamara was sent on a vocational training course to learn computer skills and shortly after secured a job as a consultant for accounting software devices.

They are slowly getting back on their feet. In turn, they are able to support Nastya. “She found her new life in Kharkov very difficult after being uprooted from her friends and teachers,” says Tamara. “It took her a long time to regain her confidence. Every time she heard a firework or a thunderstorm, it reminded her of an explosion. She would hide under the bed whenever there was a loud sound.”

Nastya could see the toll the war had taken on her mother and grandmother struggling to find work. “After recovering from the initial shock of moving towns and seeing her mother and me finally get a job, Nastya is now settled at school in Kharkov,” says Tamara.

It’s not clear what life holds in store for the Metlyaeva family, or thousands of Jews like them. The conflict in the east of Ukraine shows few signs of stopping. But unlike the football stadium back in their hometown of Donetsk, Tamara, Olga and Nastya’s lives are no longer on hold, hostages to the carnage around them.

This is the first in a three-part Jewish News series in association with World Jewish Relief, on Jewish communities around the world.