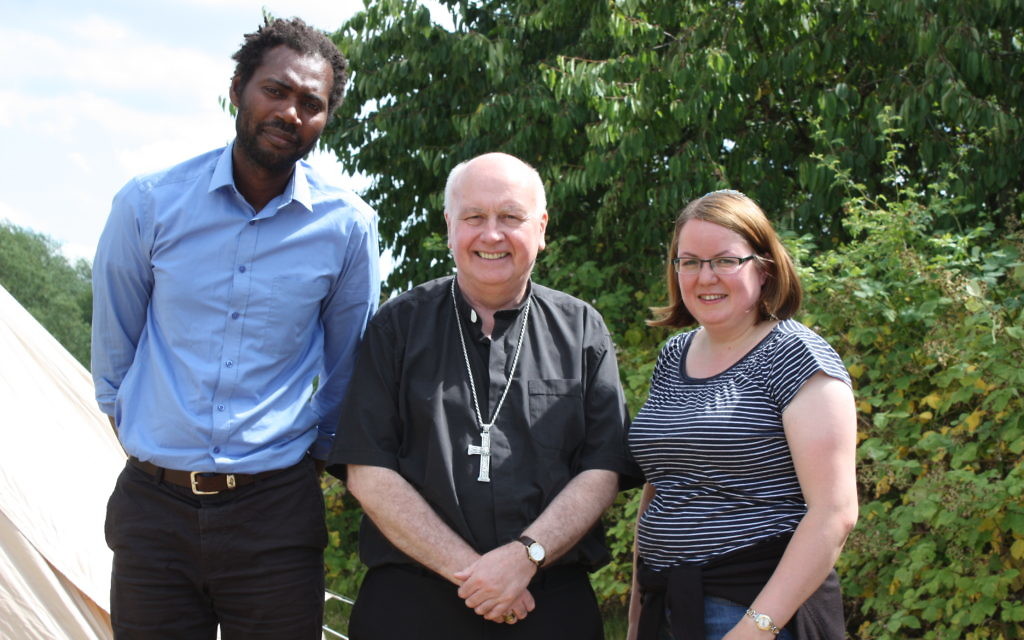 Interfaith leaders came together for the event at Harmondsworth Moor

Muslim, Christian and Jewish faith leaders came together for the event at Harmondsworth Moor

Jewish, Muslim and Christian community leaders gathered at the largest immigration detention centre in Europe last week – part of an interfaith initiative to counter the view that the UK is a “soft touch for immigrants” and campaign for an end to the indefinite detention of innocent and vulnerable people.

The day of action at Harmondsworth Moor in West London – next door to Harmondsworth Detention Centre – was organised by Jewish human rights charity Rene Cassin, and featured speeches from Eremitus Archbishop of Southwark the Most Rev Kevin McDonald, Jewish Social Action Forum chair Rabbi Natan Levy,  and Interfaith through the Arts director Imam Dr Mamadou Bocoum, as well as first-hand testimony from former detainees. Also in attendance was the Labour MP for Hayes and Harlington, John McDonnell.

Part of Rene Cassin’s ‘Time for a Time Limit’ campaign, the event – which was free to all and open to those of any faith or none – sought to highlight the plight of those locked up in immigrant detention centres. The UK the only country in Europe where immigrants can be locked up indefinitely, something which the charity says happens routinely.

Rabbi Natan Levy drew on the experiences of the diaspora in his speech, and said: “As a Jew, whose history is laden with the story of immigrants seeking a home – from the promised land to a safe harbour for the St. Louis during the Holocaust – we know the heart of the refugee.

“Our history obliges us to call for change – it means nothing if we do not choose to act when the stranger cries out for our help.”

Describing the detention centres as “counterproductive and ineffective”, Imam Bocoum praised the interfaith cooperation, and added: “I genuinely believe that the Abrahamic Tent can both highlight and expose the inhuman treatment that many people are going through”.

The shadow of newly 800-year-old Magna Carta, signed just over ten miles away in 1215 at Runnymede, loomed large over the dispute – with Rene Cassin’s director Mia Hasenson-Gross saying the debacle of indefinite detention made a mockery of the much-vaunted charter.

She said: “At Harmondsworth, innocent and often vulnerable people are locked up indefinitely. Their only ‘crime’ is that they asked us for help. Almost exactly 800 years after it was agreed at nearby Runnymede, Magna Carta’s most famous clause – ‘to no-one will we deny or delay right or justice’ – rings very hollow to the people in places like Harmondsworth.

“We demand a limit of 28 days detention – justice must not be denied or delayed any longer”.