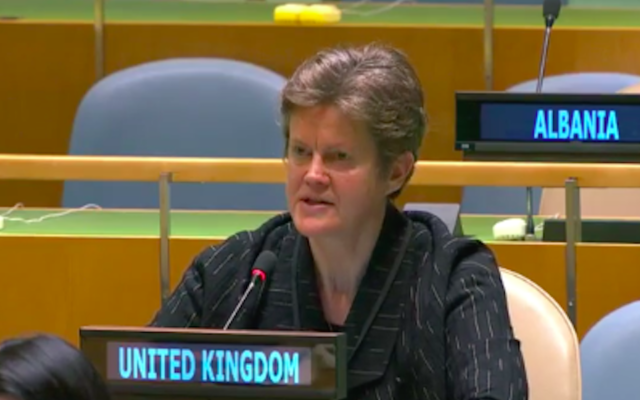 Barbara Woodward speaking at the UN

The Middle East Peace Process continues to impact negatively on the lives of everyday Israelis and Palestinians, and the ongoing conflict is in need of a just and lasting resolution, the UK’s Permanent Representative to the UN has warned.

Ambassador Barbara Woodward told a Security Council briefing on the Middle East Peace Process that the UK welcomed “the increased calm in Gaza, and recent steps taken by Israel to reduce constraints on access for goods and people into and out of the strip.”

But then, listing what she said were “negative trends”, Woodward said “rates of demolitions and evictions of Palestinians from their homes have continued to rise, and this year may see the worst rate of demolitions in five years. ”

She added: “We urge the Government of Israel to ensure that Palestinian families living in the Occupied Territories can remain safely in their homes.”

The former British Ambassador to China also spoke on Tuesday of a rise in violence in the West Bank, “including settler attacks against Palestinian people and property.”

She referenced “the shocking attack” on the Palestinian village of Umm Mufaqarah, in the South Hebron Hills, on 28 September which resulted in a three-year-old Palestinian child being hospitalised.

“We call on Israel to provide appropriate protection to the Palestinian civilian population, to ensure all such incidents are investigated thoroughly, and for those responsible to be brought to justice,” said Woodward.

She continued: “We are also concerned about the Israeli Security Forces’ use of excessive force. We continue to urge Israel to uphold the principles of necessity and proportionality when defending its legitimate security interests.”

The ambassador did say she welcomed” the Government of Israel’s commitment to addressing settler violence and Foreign Minister Lapid’s condemnation of the Umm Mufaqarah attack.”

Woodward said the Palestinian Authority’s (PA) “dire fiscal situation carries the risk that it is unable to pay salaries or its suppliers in full from next month onwards.”

She said “rapid action is needed to improve the situation.”

The UK will continue to work with the PA to help it implement necessary reforms, and we urge our international partners to do the same, she added, before concluding that the lack of progress in the Middle East Peace Process “continues to impact negatively on the lives of everyday Israelis and Palestinians.”