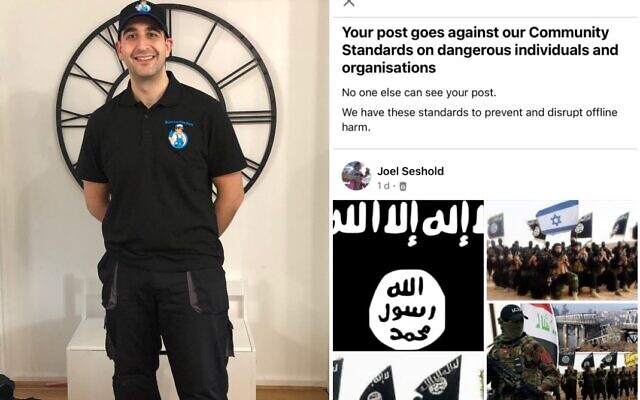 L; Joel Seshold, R: Some of the imagery that was posted on his account

Three albums of ISIS content were posted on Joel Seshold’s account on Monday, with some of the images showing the Israeli flag in place of the black flag of the terror group.

Despite the Borehamwood resident deleting the photos within minutes, and reporting the hack immediately to Facebook, the social media giant barred his account for breaking standards on “dangerous individuals and communities.”

It also barred him from accessing his business’ Instagram page for a DIY assembly business, from which he receives the majority of his clients – and rejected his appeal saying it “cannot be reversed.”

“I’d just pulled up in Hendon to donate my time to a charity, and I got a phone call from my wife saying what have you been doing on Facebook, get on there now,” said Joel.

“And I looked at my Facebook profile and thought ‘What the f***’. I would class it as an antisemitic content, because of the stuff they posted.

“The fact they have removed the ISIS flag and replaced it with Israeli flag, and posting it to someone who’s Jewish and very much involved in their community, that’s an antisemitic attack.

“I’m so annoyed that someone has hacked me, and Facebook hasn’t even looked at it. There’s pictures on Facebook of relatives that are now dead and I can’t access them any other way.

“But to disable and delete the business profile that wasn’t linked in any way, I think it’s wholly unfair. Most of my work is word of mouth, and now I can’t get any of that.”

Among the images posted by the troll include fighters with the terror group seemingly in Iraq, and other masked extremists in the group holding guns.

A Facebook spokesperson told Jewish News: “We’re sorry to hear that Mr Seshold was targeted by hackers and these offensive images were posted on his account.

“We do not allow content that praises, supports or represents terrorist groups, which is why the account was taken down. We have put measures in place to secure his account and allow him to safely regain access.”