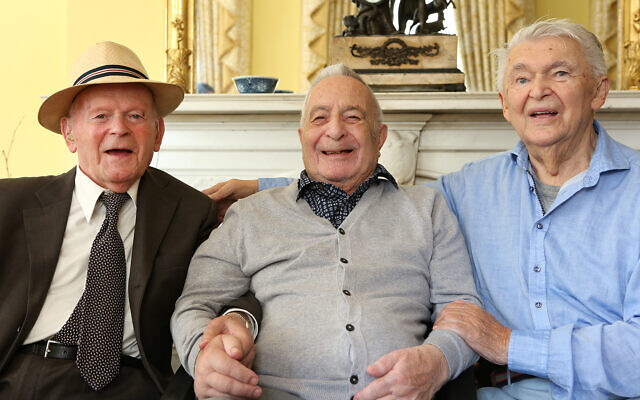 (l to r) Sir Ben Helfgott, Jan Goldberger and Harry Spiro pictured at a lunch inside Holmehurst, the original Loughton hostel, now a privately owned residence owned by Wendy and Richard Higgins, who opened up their home to a group of 80 members of the '45 Aid Society, including the 3 Loughton Boys and their families as well as other Boys and local dignitaries (credit: Melissa Page)

Grandchildren of “The Boys” — the young Jewish men and women who arrived in Britain after liberation in 1945 — have put together a groundbreaking online archive about their grandparents’ experiences.

Under the direction of 45 Aid Society vice-chair Philip Burton, and historical adviser Rosie Whitehouse, the archive — an ongoing research project — gives details of the birthplaces of The Boys, their journeys to the UK, the hostels where they stayed after their initial few months in Windermere, in the Lake District, and new and often previously unrecorded information about the people who cared for them.

“The Boys” arrived in Britain in five separate groups between 1945 and 1948 — and a first surprise for the young researchers was that in fact there were more than 200 girls among the 700 plus orphaned Holocaust survivors.

Many of them settled in the UK, established successful businesses, married and had families of their own. Some emigrated to Israel, USA, Canada and elsewhere.

The standard work on the young immigrants was Sir Martin Gilbert’s 1996 book, “The Boys: Triumph over Adversity”, together with some memoirs from a few of them. But little was known about what happened to them after liberation.

The new project — the result of painstaking research by the Third Generation, the grandchildren of the survivors — includes profiles of each one of the Boys, a map of the places where they were born and grew up, and pictures of all the hostels which housed them after their arrival in Britain.

The new archive, the result of months of patient research by the Third Generation, is now said to be the single best source of information about the Boys, and can be added to as additional details are discovered. It was launched in a short film —Introducing the Archive of the Boys — which was shown at the Association of Jewish Refugees’ Connecting Next Generations two-day conference on Sunday and Monday.

Angela Cohen, chair of the ’45 Aid Society, said: “After all the months of hard work that went into the creation of this incredible archive, I’m absolutely delighted with the result. It’s my hope that it can become a valuable teaching resource, enabling children across the UK to learn about what the Boys, like my father Moishe Malenicky, suffered during the Holocaust, to ensure that it never happens again.”

Zac Greenberg, who worked on the research team and is the grandson of one of the Boys, Victor Greenberg, said: “The Boys’ stories don’t end with the fact that the Holocaust happened. They’re more than just Holocaust survivors. They created a family, established themselves in a country where they knew nobody and didn’t speak the language, so ultimately, it’s a story of resilience and perseverance. I think it’s incredibly important to share that because people can learn from it.”

READ MORE FROM THE AJR Conference: