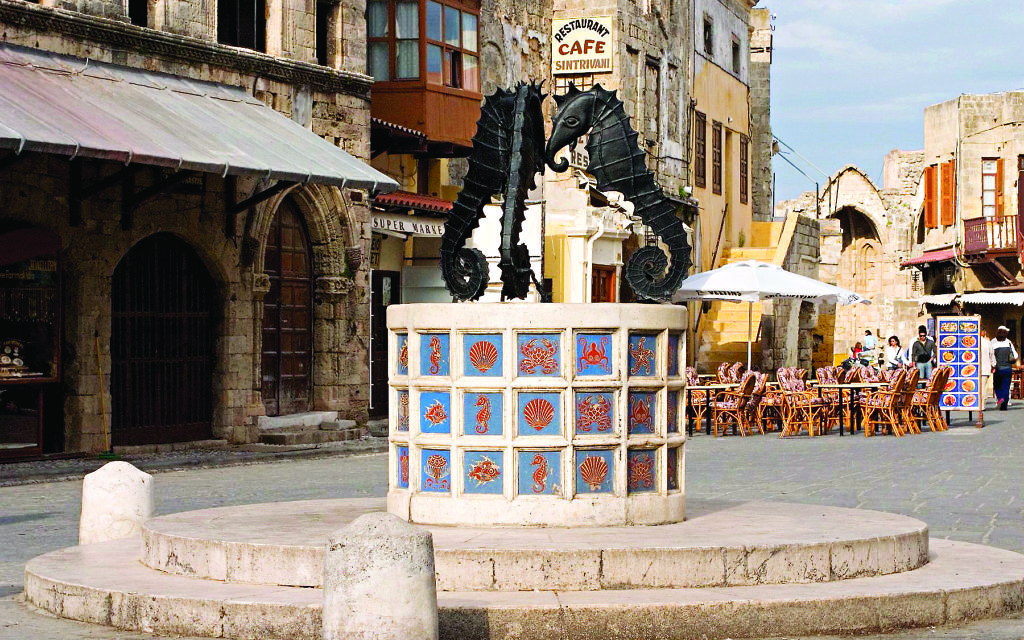 Ian Bloom explores the 3,000-year history of the Jewish community on Greece’s leading holiday island and looks at the memories they left behind

The lion may not yet be ready to snuggle up to the lamb, but however hungry they are, the mangy cats of La Calle Ancha know better than to stalk the tame local parrots, which spend their days competing for tourist custom in the heart of the Jewish quarter of Rhodes.

Rhodes’ Holocaust memorial on its Star of David plinth

This colourful flock form an inadvertent and ever-changing avian guard of honour for the island’s Holocaust memorial, sited a few yards away in a small park where many Jewish homes once stood.

The first reference to the Jews of Rhodes appeared in the book of the Maccabees in the second century BCE. Josephus Flavius, the Jewish historian, mentioned them in his writings 200 years later.

It took another 1,000 years for any further details to be recorded by the itinerant Spanish Rabbi Benjamin, who reported that there were 400 Jews on the island and that they conducted their services in Greek. In the 14th century, the Knights of St John compelled the Jewish community to live in a ghetto in a section of the old city.

Following a brief expulsion in around 1500, of those Jews who refused to convert to Christianity, Suleiman the Magnificent invited Jews in 1522 into his Ottoman empire to live in Rhodes. Many who came were refugees from the Spanish and Portuguese expulsions of the 1490s.

These Sephardim who settled in Rhodes spoke Ladino and kept their Iberian customs and cultural and religious traditions. The Jews of Rhodes were able both to trade and practise their religion in relative peace for the following four centuries.

The Edmond de Rothschild plaque at the Jewish school in Rhodes

In fact, Rhodes became a centre of Sephardic education, with the establishment of several synagogues and a rabbinic seminary. In the late 1880s, Baron Edmond de Rothschild donated funds for a Jewish school on the island. A plaque can still be seen recording his gift.

The Jewish population of Rhodes peaked 100 years ago at around 4,000. After that, many Jews left Rhodes for America and southern Africa in search of better financial opportunities. Italy’s occupation of the island in the 1920s and introduction of racial laws prompted a further exodus.

In July 1944, the remaining 1,673 members of the community (except for 42 Turkish Jewish citizens) were transported in an horrific sea and land journey to Auschwitz. Six months later when the camp was liberated there were around 150 survivors of the group. Very few returned to Rhodes, with most going to Israel or America.

The hexagonal Holocaust memorial in elegant black marble is mounted on a Star of David plinth. The inscription to the memory of the martyrs who died in the camp is in Greek, Hebrew, English, French, Italian and Ladino.

It marks a convenient starting point for following the Jewish trail in Rhodes – a walk of about a kilometre – through empty, narrow, sometimes arched, back streets and alleys. Derelict houses which, surprisingly, still bear witness to severe wartime bomb damage, 75 years on, also bear faded Jewish symbols in their broken walls.

The highlight, indeed, the only uplifting physical reminder of the near-continuous 3,000-year history of Jewish settlement in the island’s capital is the Kahal Shalom Synagogue (built in 1577 and the oldest synagogue in Greece) and the adjacent museum.

There are now just 20 or 25 Jews from four or five families living in Rhodes, so services are possible only in the summer months, when Jewish tourists and a passing minister are in town. But the restored synagogue itself, built in the Sephardic tradition with a central bimah and decorated by various family plaques and, unusually, several wall paintings, is well worth a visit if you are there during its limited opening hours.

The museum next door displays hundreds of exhibits of Jewish life on the island, including an ancient sefer torah, and describes the history of this old community in a series of well-written wall panels.

Finally, the Jewish cemetery was situated originally just outside the city walls near the Gate of St John. In 1937, the Italian governor of Rhodes forced the community to relocate it to a new site about a mile away.

He also used about 100 tombstones as construction material for a palace he was building.

The cemetery was renovated in the late 1990s, when some ancient burial stones from the 16th century were identified and restored.