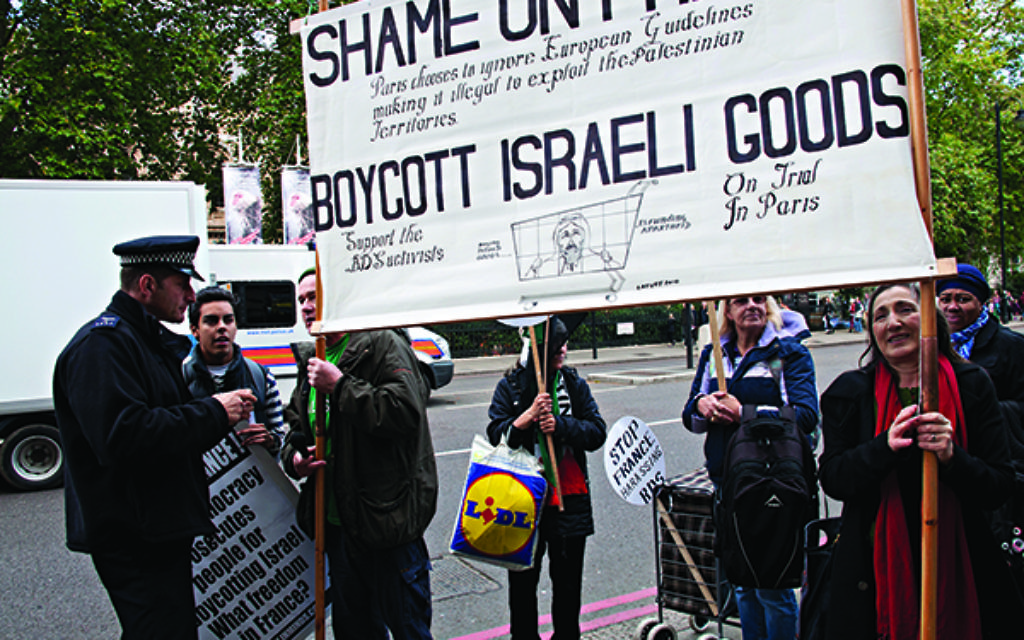 Pro-Palestinian protesters call for a boycott on Israeli goods in central London.

Confidential documents have shed new light on concerns of the Board of Deputies ahead of the suspension of Middle East peace talks and their fears of over the potential for growing polarisation within the community over Israel.

A draft document seen by the Jewish News looks to set out the possible consequences whether the nine-month process ends in failure or with an agreement, as well as to examine how community leaders should respond. It is believed to have been written around six weeks ago.

While the Board document focuses on what would happen if the talks broke down with Israel taking the brunt of blame – which has not been the case –  a spokesperson for the organisation said this week that “the diversity of opinion in the community remains clear”.

The report warns that, if the Jewish state is blamed, Anglo-Jewry is “likely to become more polarised, with an increasingly vocal and mainstream bloc of opposition to Israeli Government policy at the same time as a committed pro-Israel activist corp”.

Pointing out that communal surveys have pointed to overwhelming support for the two state solution and opposition to settlement construction, it warns: “If the Israeli Government appears to be acting against those convictions, some Jews will respond by openly or privately opposing Israel, including boycotts. Caught between instinctive support but an opposition to Israel’s policies, many Jews could feel turned off entirely, neither criticising publicly nor being prepared to express support.”

The report also warns of the potential fallout in the political sphere and among civil society, with trade unions and churches “likely to toughen existing stances and upgrade sanctions”. While it says the community broadly understands the challenges faced by Israel in terms of the Palestinian Authority and moreover with Hamas and that the PA’s refusal to recognise Israel as a Jewish state “rankles”, it says that the majority of UK society believe settlement expansion does greater damage to peace prospects.

It warns: “The risk of arguing for the fault of failure lying squarely with the Palestinians while many will at least partially blame Israel, is that supporters of Israel will become increasingly discredited, irrelevant and marginal.”

Rather, whatever the outcome of the talks, it urges a “positive and proactive” four-pronged strategy expressing a desire for peace, security, prosperity and equality. This could include efforts to promote further trade with Israel and working on joint projects with civil society organisations, it suggested.

The document however also warns of the potential fallout if talks such the desired the outcome.  Reflecting on the fact Israeli Embassy was attacked in London the day after an agreement was signed with Jordan, it says: “If talks are successful Israel and the UK Jewish community may face a heightened terror threat from those seeking to thwart the process.”

The draft document was produced by the Board before being passed to others communal organisations and pro-Israel group for their feedback. However it’s understood some of those organisations were angered by a lack of prior consultation and felt the report had been produced too early at a time when there were still hopes of an extension in peace talks beyond the April deadline.

But a Board spokesperson said: “Clearly the working draft could not foresee all scenarios. But concerns about the levels of hostility from anti-Israel activists were a factor even before the current round of talks. Similarly, the diversity of opinion in the community remains clear. Through its democratic structure and culture of open debate, the Board is well-placed to accommodate the range of constructive voices and to advocate consensus positions. Meanwhile, the need to be positive and proactive, rather than negative and reactive, still rings very true.”