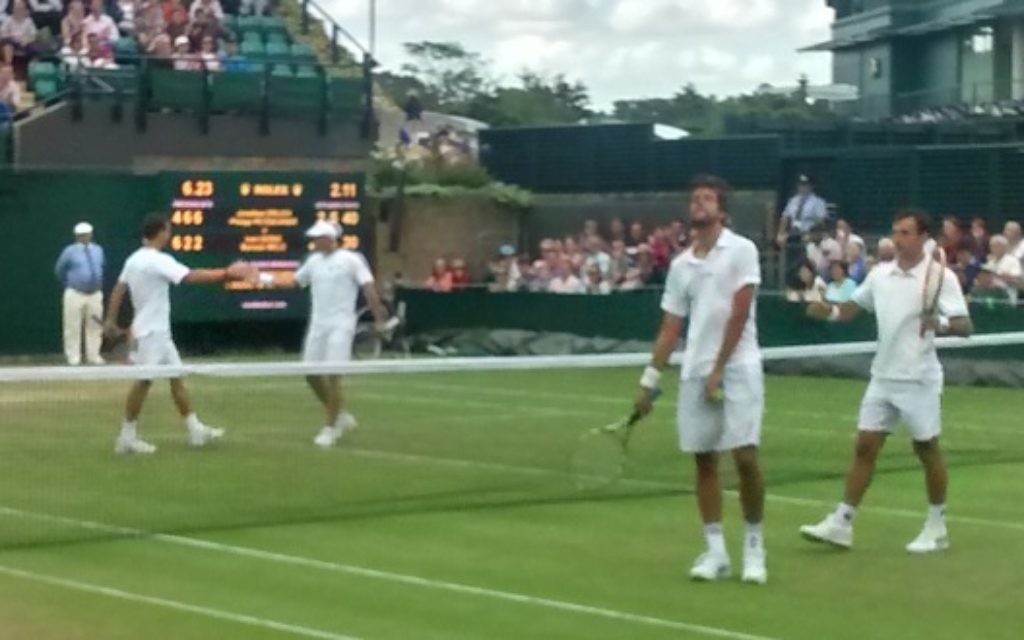 Yoni Erlich struggled to contain his delight after he and German Philipp Petzschner booked their place in the semi-final of the men’s doubles competition at Wimbledon on Tuesday evening.

Beating the number two seeds – and last month’s French Open champions, Croatian Iva Dodig and Brazilian Marcelo Melo 4-6, 6-2, 6-2, 6-4, Erlich told Jewish News: “I’m very excited with that win, it’s been a long time since I’ve been that excited after a match, I’m very, very happy. I think we were very focussed from the beginning and that apart from maybe one two games at the end of the first set, we were very solid, I’m very proud of us both.”

Despite losing the first set, the 38-year-old was still full of plaudits for both him and Petzschner given how they approached the match against their illustrious opponents. “It’s pleasing how focussed, how much in control of the game we were and I think that’s the maturity in both of us coming through,” he said. “We’re very experienced and used the maturity and experience to stay calm. Knowing that you’re still playing well even if they come up with some crazy shots, we still played well and realised those shots don’t define the match. I think that put them under pressure because they would have thought we might go down [after we lost the first set], we didn’t – and I’m very proud of that.”

Having gone on record at the end of their first round victory, saying how he felt they could win this tournament, his confidence is even more apparent three victories later. He said: “I told you then I wasn’t shy to say that I was confident we could go on and win this tournament. I feel as a team, we’re strong and we showed it on the court, particularly against a great team – one of the best in the world right now who have just won the title at the French Open. Every match builds up more confidence and we’ll keep pressing forward. And like I said at the end of that first match, there is still room for improvement now, especially in such long matches. You always have some ups and downs, but every match is different tactically. Today we needed to take more chances, like when we were leading at the beginning because we were 0-40 twice and couldn’t convert the break points, but besides that we were very focussed, didn’t make many mistakes and it was great fun.”

Having seen off the number two seeds, they next face the 13th seeds GB’s Jamie Murray and Australian John Peers. He says: “I know both of them very well and have followed them over the past couple of years, they’re improving a lot, are two good guys, both on and off the court, and it will be a very exciting match. It’s a semi-final match and I’m sure everybody will be excited to be on the court and will be looking to go one stage further and reach the final.”
Comparing his relationship on the court with the one he had with Andy Ram – which saw them win the Australian Open doubles title as well as star for Israel in the Davis Cup, he said: “It’s very different for me than to playing with Andy, I’m now more mature for a start and Phillipp’s a great guy who I enjoy playing with very much. I’m almost at the end of my career, so this is a great achievement for myself. With Andy it was at the beginning of my career, so everything was so exciting and so new. Everything’s so exciting when you’re 25 and Andy was a great friend of mine also before and it was a great adventure representing Israel too.

“It’s great playing with both of them, Andy’s probably a bit stronger due to playing for Israel, and he’s still a great friend of mine and is here supporting me on the sidelines.”

In reaching the semi-final, he’s matched his best ever appearance at SW19, which came in his first Wimbledon campaign with Ram back in 2003. “It’s hard to say why it’s taken so long to repeat the fact”, he says. “Coming into tournaments with Andy, we always had great motivation and confidence, we were both great double guys and loved playing on the grass. We came her highly seeded most of the years, but just didn’t connect. We made the quarter-finals on a couple of occasions, but sometimes a few points here or there can make the difference, but it doesn’t matter as we’re here again now!”