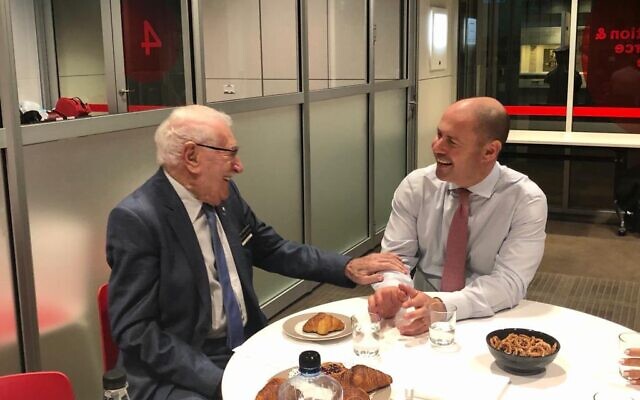 He had suffered a heart attack a few months earlier, J-Wire reported.

“Australia has lost a giant,” Frydenberg said in a statement. “Scarred by the past, he only looked forward. May his story be told for generations to come.”

Jaku was born Abraham “Adi” Jakubowiez in Leipzig, Germany. He earned a high school engineering degree that he said later helped him survive in Nazi concentration camps, since his slave labor was valuable, according to the Associated Press.

He was sent to multiple camps, including Buchenwald and Auschwitz, and escaped from what he suspected was a death march in the latter as Allied soldiers approached.

Jaku married his Jewish wife Flore in Belgium in 1946 — she survived the war by pretending to be Christian — and they immigrated to Australia in 1950, eventually going into the real estate business together. Jaku went on to volunteer and talk to high school students and other visitors to the Sydney Jewish Museum.

“Eddie’s impact will be felt for generations to come,” the museum wrote in a statement posted to social media.

Jaku said that after the birth of his first son — he would have another — he “realised I was the luckiest man on Earth.”

That sentiment was evident in the title of his book, which was translated and published in over 30 countries, from the U.S. to Europe to Asia. An updated version, with additional photos and more of Jaku’s story, including the fate of his sister, which was left out of the original publication — something that fans have been clamoring for since the book became a best seller, according to his son Michael — will be published next month.

“Life is what you want it to be, life is in your hands,” Jaku wrote in his book. “You know happiness doesn’t fall from the sky. It’s in your hands. You want to be happy? You can be happy.”

Frydenberg met with Jaku earlier this year, a few months before his 101st birthday.

Karen Pollock, chief executive of the Holocaust Educational Trust UK, said: “Each story of surviving the Holocaust is as unique as it is abhorrent. Eddie Jaku survived Kristallnacht, Buchenwald, Auschwitz-Birkenau and a death march. What was truly remarkable was that despite everything he experienced he promoted kindness. At age 100 he released his book ‘The Happiest Man on Earth’ – the title says it all.  Eddie was a great example of the indomitable spirit of our beloved survivors. We treasure those with us, and honour those who are gone. May his memory be a blessing.”

Holocaust survivor, Eddie Jaku, turns 101 next month & has devoted his life to teaching others about this dark chapter in human history.

It was a privilege to meet him today and hear about his inspiring story. pic.twitter.com/XyUA0PJAjN