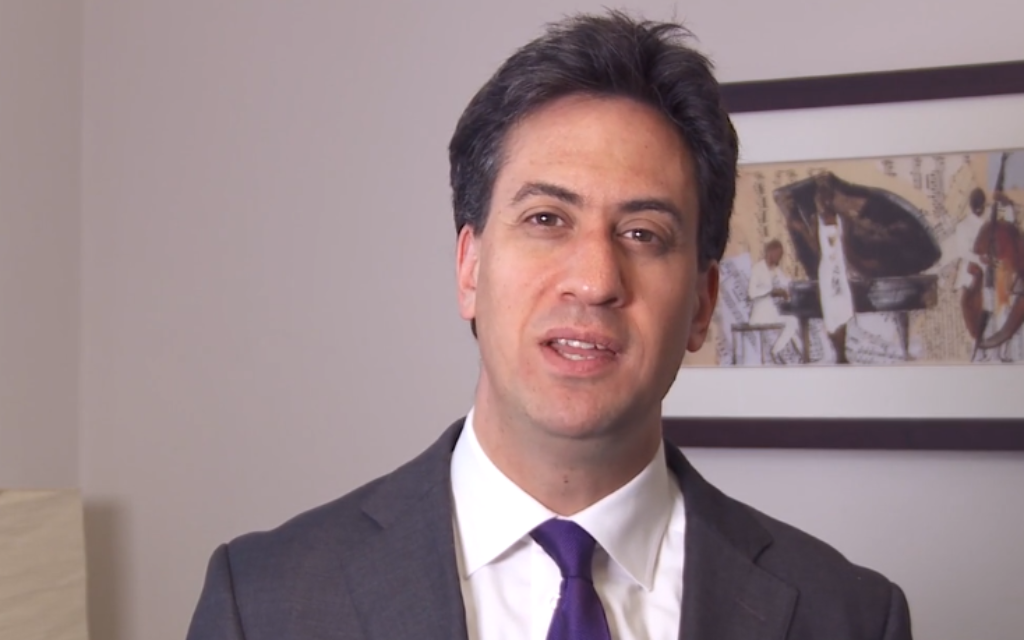 Leader of the Opposition Ed Miliband

By Ed Miliband, Leader of the Opposition

In these final few days before voting, it is right for the Jewish community, like so many other communities, to consider what an incoming Labour Government offers.

I have spent precious time with members of the Jewish community over the past five years. I have visited synagogues and schools; charities and student organisations, and I have been moved time and again by the energy, warmth and profound kindness of those I have met.

In these past years as Leader of the Opposition, I have learnt a lot from you. And I hope you have found me willing to listen and learn.

I quickly learnt that for many of those I have had the privilege to meet, you expect politicians’ good intentions to be backed up by firm actions. So I would like to take this opportunity to make three firm commitments if I am elected prime minister on 7 May.

Just over a year ago, I stood on the hilltop of Yad Vashem. It was one of my first official visits as Leader of the Opposition.

As you probably know, the visit was not only ceremonial – it was also deeply personal and very emotional at times. At the Nachshonim Kibbutz, where I had picked oranges as a child, I enjoyed a wonderful reunion with Sarah Ben Zvi, a treasured first cousin of my mother. I then had Shabbat dinner with my extended family in Tel Aviv.

I paid my respects at the Wailing Wall, and visited Yad Vashem, where after seeing the Hall of Names, I was given more details of the death of my grandfather, who was murdered by the Nazis in occupied Europe 70 years ago, along with 60 members of my wider family. Lighting a Yarzheit candle to honour his death reinforced my determination to fight the resurgence of anti-Semitism wherever it rears its ugly head.

So my first commitment to you is that a new Labour Government will take every opportunity to ensure that no expressions of anti-Semitism will be tolerated. There can be no no-go areas in our struggle against anti-Semitism. Our Government will strengthen hate crime laws, so crimes motivated by anti- Semitic hate are clearly marked on the criminal records of perpetrators and are an aggravating factor in prosecutions.

We will review police and Crown Prosecution Service guidance to ensure anti-Semitism and other hate crimes on social media are adequately covered. We will ensure central Government funding is allocated to protect the security of Jewish faith schools.

And as the experience of the Holocaust each year passes from memory to history, the importance of maintaining support for Holocaust education, remembrance and research grows.

My second commitment is to the Jewish community across the denominations. We will protect religious practices so that those who want to observe them are free to do so.

My Government will defend the right to practice shechita – we do not think shechita or halal practices should be singled out for food labelling.

And we will strongly support the continuation of the Jewish tradition of brit milah.

My third commitment is to work fervently for peace and a two-state solution – a secure Israel alongside a viable and independent Palestinian state.

A Labour Government I lead will defend Israel’s right to uphold the security and safety of its own citizens. No community should have to live in constant fear – whether from rockets, terror tunnels or suicide bombers. But, ultimately, only a return to meaningful negotiations will bring lasting peace.

Boycotts of Israel will never be a way of advancing the cause of peace. They are the wrong response and I will never support them. Labour will continue to resolutely oppose the isolation of Israel. The answer has to be greater dialogue and greater engagement rather than disengagement and boycotts.

Wherever I went in Israel, I found a zest for life, for peace and a great diversity of opinion. The recent Israeli elections highlighted just quite how diverse is the spectrum of opinion in Israel today.

I don’t deny that there may be moments when, like many Jews in Britain and indeed citizens of Israel, I do not agree with the policies of the Israeli Government. But as prime minister, I will always strive towards helping deliver a peaceful future for Israel and its citizens. And be assured that I will do so as a friend of Israel, as a Jew, and as a proud member of this community.