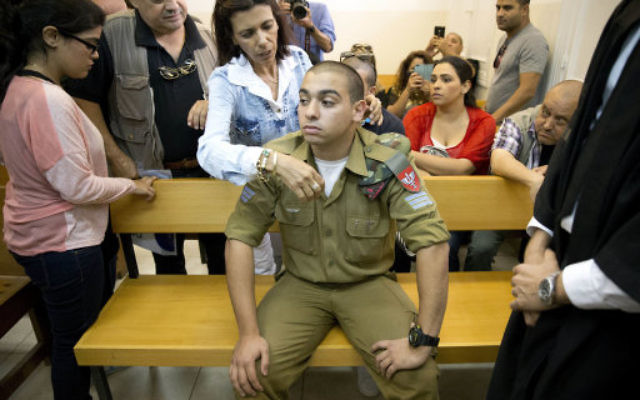 Sergeant Elor Azaria, the so-called ‘Hebron shooter’, served his country and should be pardoned, if his conviction for manslaughter for killing a Palestinian terrorist is not overturned on appeal. Why?

The clue is in the word ‘terrorist’. Moments earlier, the man Azaria shot in the head had tried to kill one of Azaria’s colleagues. Seven of every 10 young Israelis believe killing terrorists in these situations is justified, and rightly so, but it seems the army disagrees. There was public outrage at Azaria’s arrest and trial, and no wonder. That Azaria should be tried for his actions, let alone convicted, is a national disgrace. Sgt Azaria, who was but a teenager at the time of the incident, is a soldier and this is a war, fought on the streets against those who would knife any Israeli to death at the first opportunity, simply because they are Israeli, simply because they are Jewish.

Sgt Azaria was asked to follow rules of engagement against those who follow none. Moreover, when tensions are running high, when your colleagues are lying injured next to you, soldiers must make decisions – whether to shoot, stall, attack, attend to the enemy or ensure all danger is over. These are decisions soldiers should not be hauled over the coals for making by those who ask they make them. Azaria chose safety first, his safety and that of his colleagues. That this man should serve time in jail for making sure the terrorist, fresh from his attack, was no longer a threat is a travesty of justice. He is a hero, no ifs, not buts.

That’s fine if you haven’t seen the video, which shows a severely-wounded man on the ground, barely moving, posing no threat, receiving no medical attention until, some 15 minutes later, Azaria – a ‘medic’ himself – has a conversation with a colleague, cocks his rifle, aims and blows the man’s brains out. Self-defence? Safety-first? Please! That’s murder. It was, to anyone not blinkered by hate, a live execution. It was a thug soldier disregarding the rules and the law and deliberately killing a disarmed, immobilised enemy who should instead have been treated then tried. That shot to the head gave every Jew-hater a shot of motivation. By coldly, calmly killing a man lying prostrate and bleeding,  Azaria has done more to endanger his compatriots than can be known. But Israel’s prime minister wants to give him a medal and put him up in a hotel suite. By supporting a pardon, Netanyahu has given a green light to others game for a bit of extra-judicial killing, something for which Israel has lost friends already. Seriously, who are these people who think Israeli soldiers can walk round killing people who do not pose an imminent and immediate threat? Who are these people who would rather hold up a murderer as a hero than hang on to what defines Israel from its neighbours: the rule of law, the morality of minimising unnecessary killing, the discipline the IDF is known for? Azaria should thank his lucky stars manslaughter is all he was charged with.