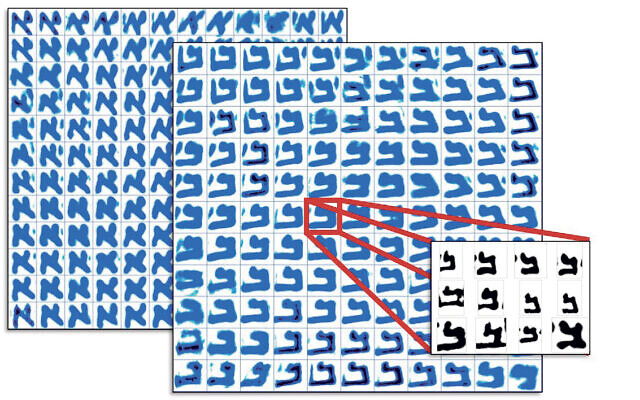 Maps show the aleph and bet characters from the Scrolls

Dutch scientists have used artificial intelligence and deep learning to discover more about the anonymous scribes behind the Dead Sea Scrolls.

Discovered 70 years ago, the scrolls contain the oldest manuscripts of the Hebrew Bible and previously unknown ancient Jewish texts. They have since been studied extensively, but their authors have remained elusive.

Now, University of Groningen researchers say they have helped crack the code, presenting their findings in the journal PLOS ONE last week.

Some manuscripts have been attributed to one scribe based on handwriting, but, to date, this has been visual guesswork.

“They would try to find a smoking gun in the handwriting, for example, a very specific trait in a letter that would identify a scribe,” said Mladen Popović, a professor of Hebrew Bible and Ancient Judaism. He teamed up with Lambert Schomaker, a professor of computer science and artificial intelligence, who uses techniques in which computers read handwriting, in a project funded by the European Research Council.

Schomaker looks at biomechanical traits – such as how we hold a pen and the way this affects our writing – and focused on the famous Great Isaiah Scroll from Qumran Cave 1, the handwriting on which seems near uniform.

“This scroll contains the letter aleph [a] at least 5,000 times,” said Schomaker. Computers, he explained, are well able to
analyse large datasets. The team needed an algorithm to separate the text (ink) from its background (the leather or the papyrus). Analysing textural and allographic features, the team showed that the 54 columns of text in the Great Isaiah Scroll fell into two distinct groups that were not distributed randomly through the scroll, but clustered, showing more than one writer.

Using heat maps to incorporate all the variants of a character, they also “found evidence for a very similar writing style shared by the two Great Isaiah Scroll scribes, which suggests a common training or origin”, said Popović.

“This opens a new window on the ancient world to reveal more intricate connections between the scribes.”

Maps show the aleph and bet characters from the Scrolls