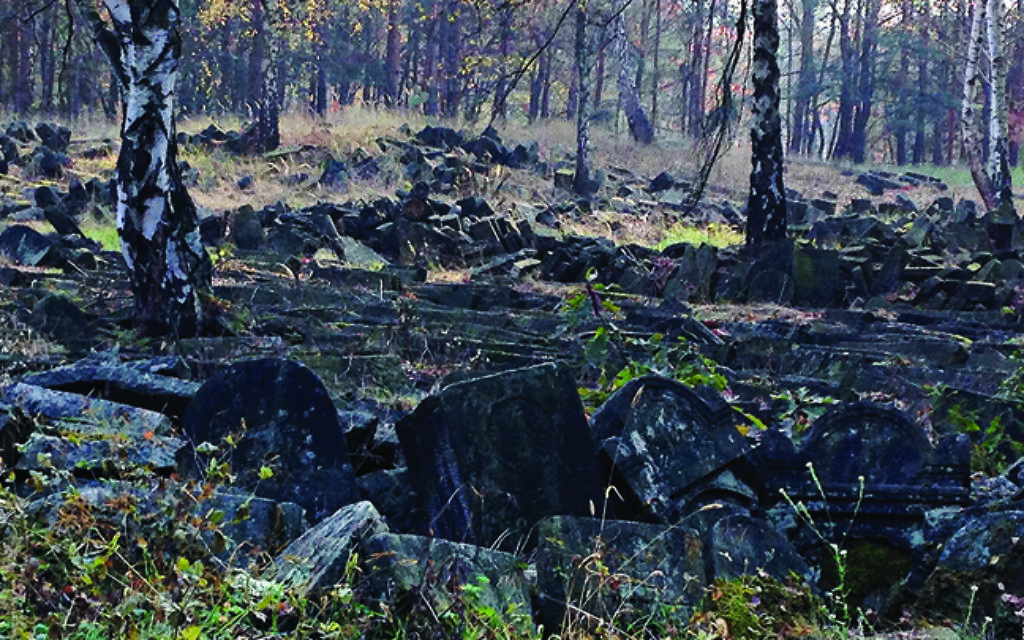 A small pathway in Okopowa, which hosts up to 400,000 graves, including multiple mass graves with unknown numbers of bodies.

From The Depths works to locate, memorialise and preserve mass Jewish graves in Poland. Jack Mendel travelled to Warsaw to find out more about the organisation’s efforts.

Visiting eerie desecrated cemeteries is chilling. But in Poland, a country that once boasted more than three million Jews, it is a necessary part of safeguarding and restoring history.

As I stood in Okopowa cemetery, Warsaw, surrounded by up to 300,000 tombstones or ‘matzevas’, I could only consider the wealth of Jewish life that once existed in this capital city.

In pre-Second World War Poland there were 1,300 Jewish cemeteries, more than there are today in the United States. Less than 100 remain.

Around 1,200 Jewish cemeteries in Poland were destroyed, have simply been neglected and forgotten or dismantled and left desolate.

The remaining graves in Brodno cemetery are desecrated and neglected

From the Depths seeks to ensure that memory is not lost, and that the past is connected with the future by bringing it back to life.

One of its key goals is to look for matzevas, restoring them from more than a thousand towns and cities across the country.

The reason the organisation focuses on matzevas is because it is a constant; because they are everywhere.

More than three million Jews lived in the country before the war; now the number is close to just 20,000. Jewish graves are the trail of Jewish history in Poland that stretches back to 1098. Wherever there were Jews there are graves – and history to uncover. By restoring their dignity, the organisation is bringing about a consciousness to people, in the sense that ‘this is what used to exist in your country, and it is thus as much your history as it is Jewish history’.

People may have tombstones and small cemeteries in their gardens, or as parts of their house, because they may live in a village, the composition of which was once 80 percent Jewish.

All over Poland, there are graves being used as paving stones, as bricks and as an assortment of everyday objects, and this is not necessarily through hatred or spitefulness against Jews, but through a simple lack of consciousness of the significance of a Jewish tombstone, or what importance it has to Jews, and to Polish-Jewish history.

As the project’s wide-ranging scope gains traction – because it applies so widely across Poland, and indeed in other countries such as Belarus – it is getting exposure as a phenomenon.

Jonny Daniels (centre) with the two Polish Strongmen, lifting a Matzeva carved like a treetrunk

The organisation recently stumbled upon a nunnery hiding up to 20 Torah scrolls, which were returned. It called upon a couple of Polish ‘strongmen’ to help lift up a 300kg headstone that was inaccessible by machinery, causing a flood of television cameras to capture the spectacle. It even brought the entire Israeli Knesset to Auschwitz to hold a session.

With regular exposure, From the Depths has turned pieces of stone into significant relics of the past. It has even signed agreements with universities around the world to assist in their recovery and research. But it isn’t really enough to tackle the bigger problems associated with Jewish-Polish history.

I was also taken to Brodno cemetery in Warsaw. It had been desecrated during the Cold War, and had up to 400,000 stones removed.

The only entrance to Brodno was through a gap in the fence, with the ground littered with rubbish.

Nobody cared; not even the Warsaw Jewish community, who own the land.

Trudging around the cemetery, counting the 134 crates of broken up matzevas, I was speechless.

Shockingly, I was then told that the Polish authorities refer to them as ‘rubble’.

They refuse, point blank, to recognise that these stones covered in Hebrew and Yiddish, are headstones.

We counted at least 134 crates at Brodno. Upon inspection, the pieces of stones are covered in hebrew and yiddish writing, all of which were once Matzevas

Even more shockingly, not far down the road from this cemetery, is the sparkling new Museum of the History of Polish Jews. The Polish Government opened it with grandeur, even sending the Polish President’s private jet to fetch the Israeli President. But it ignores the practical issues. It’s much easier to literally just bulldoze the evidence.

Upon a trip to Warsaw Zoo, I saw what these stones were used for. The zoo has a story for two reasons. During the Second World War, its director, Jan Żabiński, hid up to 300 Jews in the basement of his house – 30 at a time – and there was an escape route through to the exterior of the house.

Zabinski was honoured by Yad Vashem for his brave work. But the next director rebuilt the zoo using Jewish gravestones. From the Depths is trying to undo this and raise awareness.

While in Warsaw, I witnessed the signing of an agreement between the current director of the zoo with the founder and operator of From the Depths, Jonny Daniels. This agreement was to co-operate to restore the zoo, and also to co-operate with Yad Vashem to investigate the families who had been hidden there during the war to tell the heroic story.

The contrast between such monstrous injustice, a lack of action about it, and the regeneration of ties owing to a concerted effort to bring attention to the issue, is exactly what From the Depths stands for.

The trail that humans leave behind can often be extinguished, but From the Depths – which is a non-profit foundation that relies entirely on donations – is determined to ensure that a thousand years of Jewish history are not eclipsed.

From the Depths is looking for information about families with Polish ancestry, including names and cities, in the hope of tracking down new graves that can be cross-matched with the From the Depths database.