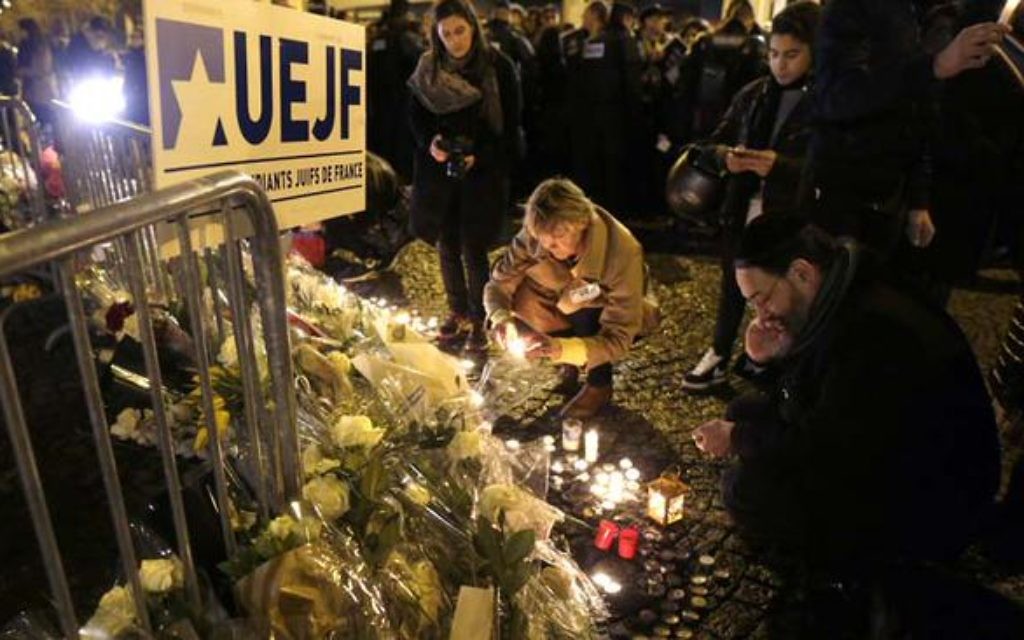 The killing of four French Jews in last week’s hostage standoff at a Paris kosher market has deepened the fears among European Jewish communities shaken by rising anti-Semitism and feeling vulnerable due to poor security and a large number of potential soft targets.

In the wake of the attacks, which follow deadly strikes on a Belgian Jewish museum and a Jewish school in south-western France, Israeli leaders have called on European Jews to immigrate to the Jewish state.

But European Jews are deeply ambivalent about leaving and their community leaders, along with top politicians, have urged people to stay in their homelands.

“The European Jewry is the oldest European minority and we have our experience of surviving under all possible circumstances,” Moshe Kantor, president of the European Jewish Congress, told the Associated Press. “We will not give up our motherland, which is called Europe. We will not stop the history of European Jewry, that is for sure.”

Mr Kantor called for increased security at Jewish sites, concerted action against anti-Semitism across the continent and better co-ordination of intelligence forces against religious extremism. But he acknowledged that if any Jewish European does not feel safe “I say you should leave in this case”.

Many French Jews already are. Last year, 7,000 emigrated to Israel as anti-Semitism spiked across France, fed by tensions with the country’s large Arab population after the outbreak of Israel’s war against Palestinian militants in the Gaza Strip. That was double the previous year, making France, for the first time, the number one source of immigration to Israel, according to the Jewish Agency, a non-profit group that helps Jews move to Israel.

Officials in Israel are expecting – and encouraging – a new influx following the Paris standoff. Since last week’s attacks, prime minister Benjamin Netanyahu has encouraged European Jews to move to the Jewish state.

In an interview with Israel’s Channel 10 TV Saturday, Yohan Cohen, one of the hostages who hid inside a freezer at the kosher market for five hours during the hostage-taking, said he would now move his family of four children to Israel.

“On Monday I am going to make Aliyah,” he said, using the Hebrew term for immigration to Israel. “We are not going to wait around here to die.”

Overall, immigration was up 88% from Western Europe in 2014, with the arrival of 8,640 immigrants compared with some 4,600 in 2013, with surges also from Italy, Belgium and Britain, according to the Jewish Agency.

Experts say European Jews have not felt this threatened since the Second World War, when some six million Jews were murdered in the Nazi Holocaust.

Researchers at Tel Aviv University monitoring anti-Semitism have reported a chilling increase in attacks in Europe over the past decade, including deadly shootings in Toulouse, France, in 2012 and Brussels last year. In recent years, France has had the highest number of incidents of any single country.

For many of Europe’s two million Jews, the mood following the Paris attacks was one of tense vigilance amid increased security and additional personal precautions. Some were defiant and determined to remain. Others wondered whether their way of life can continue.

Heightened security measures, visible and non-visible, were swiftly enacted at Jewish places of worship, study and business across Europe over the weekend. Security officials and Jewish leaders in Italy, Britain, Poland, the Netherlands, Germany and Austria confirmed increased surveillance of vulnerable sites without providing details.

Still, many Jews are taking their own precautions: an Israeli mother of three, who has been living in Berlin for several years, said she no longer allows her children to talk in Hebrew outside the home.

“When we are outside, I tell my kids to only speak English. I’m too afraid that somebody will recognise that we are Jewish or Israeli and then harm us,” said the woman.

Security at Rome’s soaring Art Deco synagogue along the Tiber River was noticeably heightened during Friday evening prayers. In the predominantly Jewish north London neighbourhoods of Golders Green and Temple Fortune, police vans drove by frequently on Sunday, while members of the Community Security Trust – a charity established to combat threats to the Jewish community – patrolled on foot.

Rivki Rokach, a manager at Kosher Kingdom supermarket, said management was putting into place new security measures, declining to specify. She said business had not dropped off since the attacks.

“People are in a bit of panic mode, but thank God people need to shop,” she said. “We are doing everything we can to make sure people are comfortable.”

A spokesman for the Jewish community in Rome, one of the oldest Jewish communities in the world, noted that security has long been tight. Metal barricades and other cement planters keep passers-by and cars from getting close to the main synagogue, and Italian police officers with automatic weapons stand guard in sentry boxes day and night. An attack by a Palestinian terrorist on the main Rome synagogue claimed the life of a toddler in 1982.

Even with the high security, “the members of our community are living through this moment with greater apprehension”, said Fabio Perugia, the spokesman.

“I can’t say we are tranquil. What they are doing is the best that they can give,” Meghnagi said.

Mr Netanyahu’s calls for immigration have not been entirely welcomed.

In France, home to the world’s third-largest Jewish community, political leaders stressed that Jews are an integral part of the French Republic, having gained citizenship during the French Revolution.

“France, without the Jews of France, is not France anymore,” prime minister Manuel Valls said.