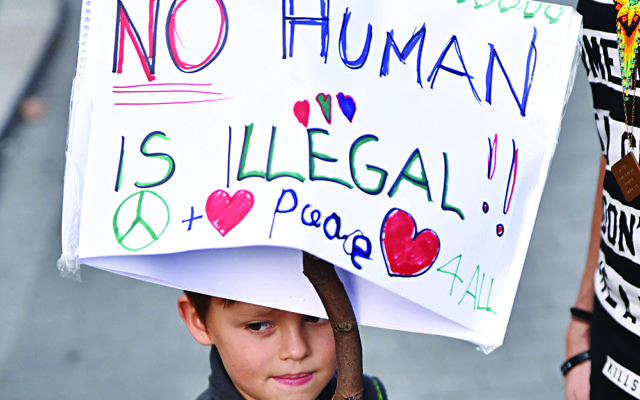 Protesters in support refugees in Westminster

David Miliband has accused the Government of “locking out” vulnerable children in a “shameful” move to close the scheme promoted by a kindertransport refugee to bring unaccompanied youngsters from Europe to the UK.

The former foreign secretary, who now heads the New York-based International Rescue Committee, spoke out after Britain announced it would only take another 150 youngsters under the Dubs Amendment – bringing the total to just 350.

The government has claimed it acts as “a draw” and encourages people traffickers. Hundreds of children have arrived and will continue to under other schemes or the asylum process, it insisted.

But Miliband – who previously accused the government of a “high degree of inertia” when it come to providing a home to lone child refugees – described the move as a “cruel blow” to refugees.

Speaking exclusively to Jewish News, he said: “The expectation was that 3,000 children would be helped, so to stop after little over a tenth of that number have arrived in the UK is astonishing. Our country is more than capable of helping these children, who are desperate and vulnerable.

“The fact that the amendment was passed after months of public pressure shows the level of support and goodwill there is for these children; locking them out without proper consultation is shameful.”

He insisted the scheme must continue and to do otherwise was “sending out all the wrong signals.

“Now is the time when the UK should be setting the example in refugee policy, rather than closing down this route to sanctuary for unaccompanied children just months after it was opened.”

Jewish groups including the Board of Deputies have urged a rethink while Archbishop of Canterbury Justin Welby has said it is “unjust” to leave the weight of responsibility on other countries in Europe.

Miliband’s intervention came on the day Lord Dubs – a former refugee from the Nazis who pushed for the amendment – delivered a 44,000-strong petition to Downing Street demanding a reversal of a decision he branded a “cop out”.

He said: “All the government needs to do is put out a new appeal to local authorities asking who can take more children,” Dubs said. “It doesn’t need a whole new consultation. We are going to keep the pressure up about this. I believe that the government decision to limit the number of children allowed in to 350 flies in the face of both parliamentary opinion and public opinion.

“I think that’s a very shabby cop-out. I believe that there are thousands of unaccompanied child refugees suffering greatly in Greece, Italy and some in France.”

Lord Dubs has suggested the move is a betrayal of Sir Nicholas Winton, the British hero who saved 669 children including himself before the Holocaust. Sir Nicholas’ family has also spoken out against the ending of the scheme.