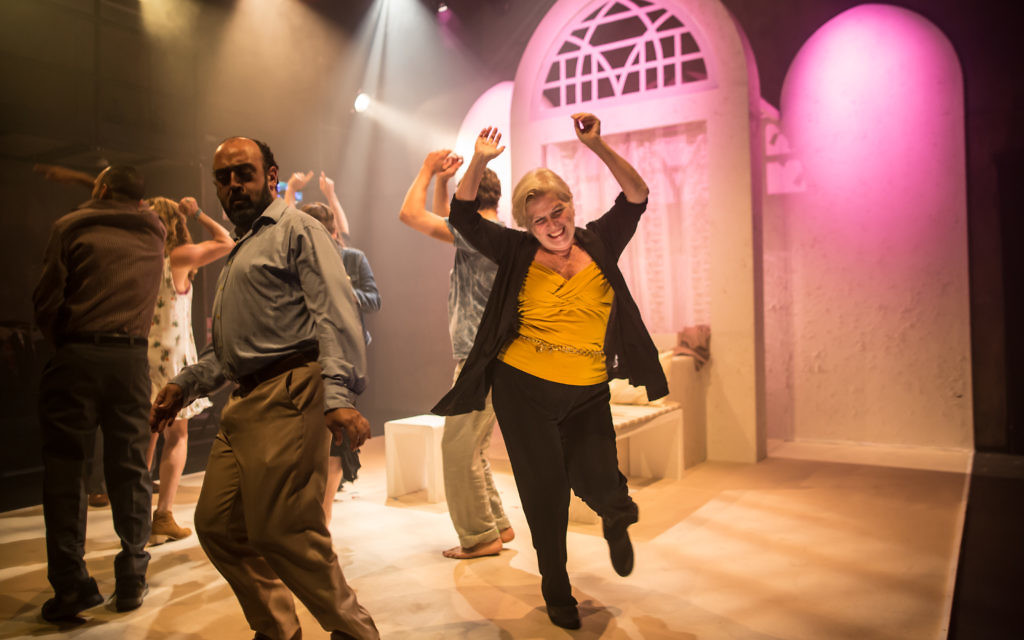 Set in a 24 hour period, Crossing Jerusalem describes the life of an ordinary Israeli family who cross Jerusalem during the 2002 intifada to eat in an Arab village.

Marking the first anniversary of the 50 day Israel-Gaza war, the play captures the complexities of family relationships as their personal tensions collide with the wider conflict.

During the intifada everyday acts such as shopping, walking the dog, or taking a bus become dangerous, owing to bombs going off.

As they live in Israel, the family’s life is inescapably political. The audience is reminded how precious life is and how everything can change in a split second. Unlike many works that attempt to examine the Israeli/Palestinian conflict, Pascal’s play aims to present different points of view.

Yael Kaufmann (Adi Lerer) is perfectly cast as the young Sephardi wife who yearns for the son, which her reservist husband denies her.

Gideon (David Ricardo-Pearce) gives a strong performance as her war-traumatised macho husband who is unable to talk about what happens when he is on active duty. He spends much of the time onstage bare-chested displaying his toned muscles, while imploding emotionally.

His dominant mother Varda, (brilliantly played by Trudy Weiss), an estate agent, is married to a slightly stereotyped vodka-drinking Russian immigrant and jealous of her beautiful, broody daughter-in-law. She chides her daughter Lee (energetically played by Louisa Clein) for her childlessness and for dating a much older man.

Another troubled reservist, Lee teaches at a school, where Arabs and Jews are educated together to help create peace. She forgets her problems and seeks vengeance on her mother by seeking casual sexual partners. Chris Spyrides gives a wonderful performance as Sergei Goldstein, the henpecked Russian patriarch, who irritatingly apologises about almost everything, “Sorry about that”.

As the Kaufman family gathers to celebrate Yael’s birthday, unresolved emotional tensions crackle, as in the background bombs explode. Israeli Jews, Arabs and Palestinians – Their fates will become intertwined on one day.

An outstanding drama performed passionately by a strong cast. The Park Theatre’s small stage is well suited for the claustrophobic atmosphere of the family squabbles.

There are few plays which so sensitively examine the lives of Jews, Arabs, Christians and Muslims, their shared customs and culture clashes.

Pascal’s play is driven by a sense of political urgency and creates valuable opportunity for debate.

Her Arab and Jewish characters defy media stereotypes and she uses family drama as a microcosm of national tensions. Her play’s ending is bleak and unresolved. We are left to make up our own minds