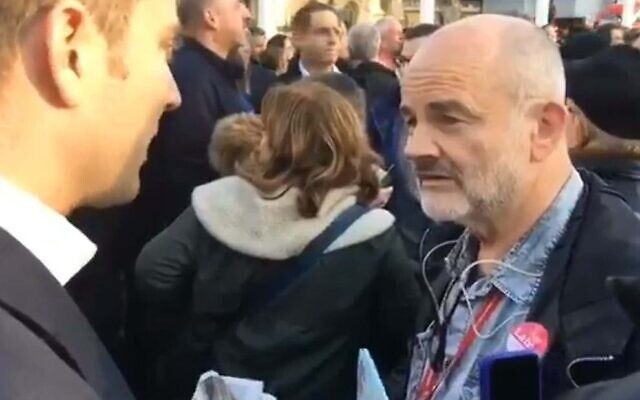 Stan Keable was filmed making the remark at a pro-Corbyn demo organised by Jewish Voice for Labour (Image:Twitter)

A London council must reinstate a worker who was filmed claiming that the Zionist movement collaborated with the Nazis – and pay him roughly £70,000, an appeals tribunal has held.

Stan Keable, an employee of Hammersmith and Fulham Council, was filmed making the remarks in an exchange with a protester on the 2018 Enough is Enough demo against antisemitism in Labour.

The self-proclaimed anti-Zionist was on a counter-demo with Jewish Voice for Labour when he made the remarks, captured by a third party in a widely-viewed Twitter video.

After his comments were criticised by local MP Greg Hands and the leader of the council, town hall officials fired the public protection and safety officer, claiming misconduct.

But a tribunal ruled that he was unfairly dismissed, and ordered he be reinstated with compensation for lost earnings – which was upheld on Tuesday after an unsuccessful appeal from the council.

Ian Austin, the dismissing officer, told the tribunal that the council accepted that the remarks were intended to be a reference to the 1933 Haavara Agreement.

The town hall also said it accepted that Mr Keable made the comments in a personal capacity, and did not publish the remarks himself.

However, the dismissing officer said a “reasonable person” would “conclude that the Claimant had said that Zionists had colluded with the Nazis in the Holocaust.”

This was rejected by judge Katherine Tucker, who found there was no evidence this was the way the council worker’s comments had been interpreted.

She ruled: “If it was within the range of reasonable responses of a reasonable employer to dismiss an employee in circumstances where they have lawfully exercised their rights to freedom of expression and freedom of assembly, unconnected in any way to the workplace, without using language which was personally abusive, insulting or obscene, and when their views and opinions have, without their consent, been published and caused offence to some, or indeed many people, then there is a very great risk of dismissal to any person who expresses their lawful political views outside the workplace.”

Keable, who is secretary of Labour Against the Witch-hunt, told The Guardian newspaper: “I’m quite willing to accept that some people were offended but that’s not a crime or a sin – it’s a necessary part of free speech.”

A Hammersmith and Fulham Council spokesperson said it was considering its options over Keable’s reinstatement.

“As a public body we always expect the highest levels of conduct from our employees. We are therefore disappointed with the judgement.”