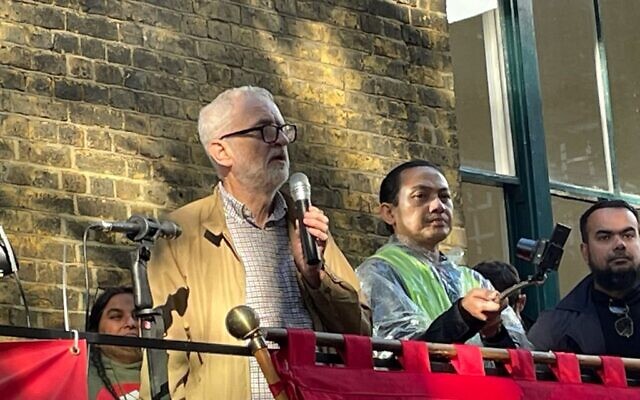 Jeremy Corbyn has delivered a speech at a rally marking the 85th anniversary of Cable Street aided by an activist suspended by Labour last year for writing a letter criticising his MP’s efforts to try to improve relations with the Jewish community.

Labour members from Liverpool contacted Jewish News to express dismay that suspended activist Hazuan Hashim was seen standing alongside Corbyn holding a microphone for him during his speech on Sunday.

Hashim was one of four members of Liverpool Wavetree CLP suspended after circulating a letter criticising their local MP Paula Barker for an article she wrote in a local Jewish newspaper expressing a wish to patch up relations with the community after the breakdown of relations under Corbyn.

In her article for the Jewish Telegraph MP Barker also said it was “deeply regrettable” that her predecessor Luciana Berger felt she could no longer stay in the party.

But after the article was published four members of the Wavertree CLP executive sent a statement to local members describing Barker’s article as taking an “inaccurate and factionally motivated position on antisemitism which was used in order to personally attack and seriously undermine Labour’s socialist programme during the leadership of Jeremy Corbyn.”

Labour chiefs reacted swiftly and suspended Hashim, and the three others who had signed the inflammatory statement.

The suspended officials became known as the “Wavertree 4” as their actions were defended by groups such as Labour Against The Witch-hunt, who are now banned by Labour for downplaying or denying antisemitism.

Despite this suspension Hashim, who was Wavertree CLP’s BAME Officer, was given a leading role at Sunday’s Cable Street event, at which he was photographed holding the microphone stand for Corbyn, while wearing a hi vis stewards jacket.

One Liverpool Labour activist, who has campaigned against antisemitism in the city told Jewish News:”It makes my blood boil seeing Jeremy Corbyn give a speech at an event, that is meant to show solidarity with British Jews, alongside someone who has actively tried to harm relations with the local Jewish community in Liverpool.

“Hazuan Hashim should be nowhere near this event, and neither should Corbyn.”

The Jewish Labour Movement’s National secretary Adam Langleben said “It’s outrageous that the largest Jewish organisation on the left, by a considerable mile, and one of the Labour Party’s oldest affiliates was not invited to participate in the 85th anniversary of the Battle of Cable Street. Many of our members had family who were present and fought back against the fascists in the East End of London.

“At the 80th anniversary five years ago one hundred JLM members joined the march and our Vice Chair Sarah Sackman was invited to speak from the stage.

“No single ideological tradition, community or faith group descendent has the authority to claim sole ownership over remembering such an important piece of our collective history. Some parts of the left are far more comfortable remembering dead Jews of the past rather than standing alongside living Jews today.”

Also speaking at Sunday’s march, which was organised by the Jewish Socialist Group (JSG) was the local Poplar and Limehouse MP Apsana Begum.

Just days earlier, at a meeting of the left-wing Socialist Campaign Group, Begum had called for the end of “attacks on our members and the wave of suspensions and auto exclusions” – a reference to the action being taken against Labour members belonging to now proscribed groups who have denied or downplayed antisemitism.

The JSG have been amongst Corbyn’s staunchest supporters – and have regularly sought to exploit the fact that organisations such as the Board of Deputies advised Jews to stay away from the infamous Battle of Cable Street.

On October 4 1936, hundreds of thousands of people blocked a planned march by Sir Oswald Mosley’s British Union of Fascists through an area populated by many Jewish families..

But in more recent years, the JSG have regularly denied claims of antisemitism in Labour, and have been behind attempts to slur the Board as pro-Tory.

David Rosenberg, one of the group’s leaders, also penned an article published on the Labour Against The Witchhunt group’s website defending the Wavertree 4 and his “friend” Hashim after they were suspended in May 2020.

Promoting Sunday’s demo Rosenberg wrote:”We will not forget how the Board of Deputies told Jews to stay indoors claiming that any involvement in public demonstrations against Mosley would aid antisemites.

“It was their aloofness, their complacency… that was aiding antisemites.”

Sunday’s march saw a banner from the Communist Party of Britain displayed in front of those who spoke.

The Jewish Labour Movement, who have previously joined Cable Street commemorations were not invited, neither were any other mainstream communal organisations.

Hushim runs a film company called Studio 31 Whitechapel with another Liverpool Labour activist named Phil Maxwell, who is himself under investigation by the party.
Both Maxwell and Hushim attended the Cable Street march, which they filmed.