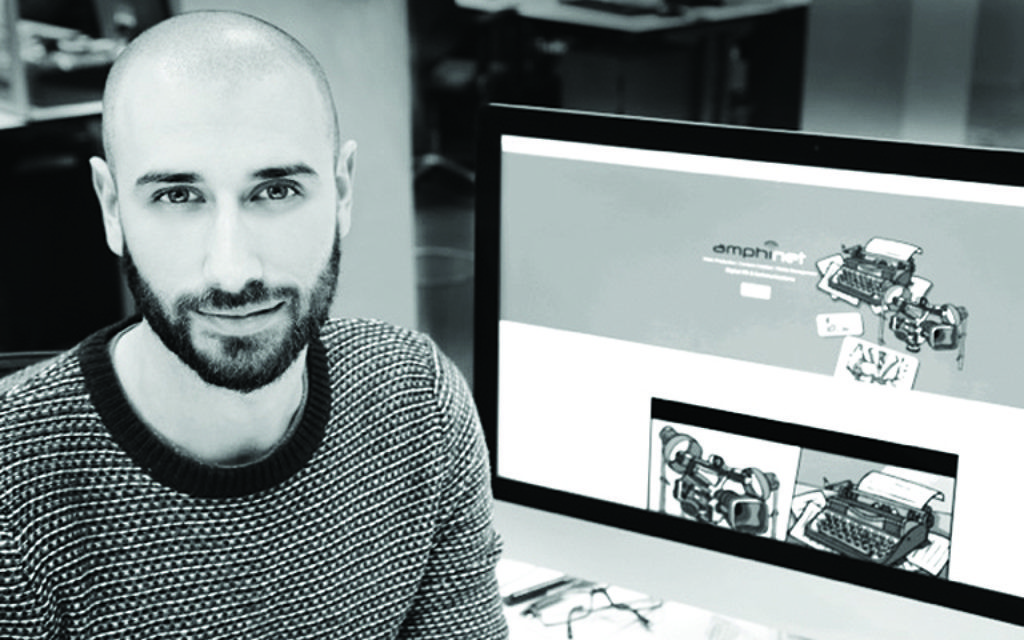 It took numerous meetings in a local cafe and many, many coffees, before Amphinet was born.

Ben Burman was discussing business with an old school friend when they came to the realisation that their professional skills combined would fill a gap in the business services market.

At the time, Burman was involved in film and television work; his friend, Ashley Gaines, was a marketer, and online corporate videos were ready to kick off in a big way.

As Burman, 25, explains: “We put two and two together and decided to start a business that would help to market clients online by combining the two mediums of film-making and creative writing ­– and managing the results on social media platforms such as Facebook.”

The result was Amphinet, a combination of the words “amphitheatre”, a place where you project yourself to a large audience, and “network”, symbolising the online connections that communicate with each other to promote a company. It sounds like a particularly ambitious brief, but Burman, who is co-owner of the business with Gaines and with clients such as Boost Capital, Millharbour Digital and the Sales Doctors under his belt, says the idea caught on and he is quietly pleased with the way things are going.

The company is based in Barnet, but covers the whole of the UK, producing creative content from blogs and articles, to broadcast quality corporate films. Once created, Amphinet can utilise this bespoke content to optimally promote and market their clients through multimedia channels.

The photography and video side is Burman’s speciality. After leaving Southgate School, he enrolled at the Metropolitan Film School, based at Ealing Studios in London, achieving a BA Hons, and moved into producing documentaries for BBC, ITV and various advertising agencies.

There followed the coffee-laden meeting with Gaines – and Amphinet was born. Although it started in a casual way, there is a serious side to Amphinet. Well aware that there is fierce competition out there, Burman says the secret of the company’s success is its different take on social media management. “We produce creative content that is original”, he says, stressing the word “original”, “based on the initial idea having been developed by us in conjunction with our clients. We have a quality, not quantity, policy, and make sure all our clients are seen to be taking social media seriously.

“We don’t source content that has been created already from the internet, as many other digital marketing companies do. We take pride in showcasing our clients by creating bespoke and relevant content for them that we know works well on online multimedia platforms.

“That means the content we upload and manage for them is there to be a potential engagement point, every time someone clicks on a client’s website, or their social media pages. “We also treat each client as an individual and aim to develop a strong positive relationship so we can develop ideas together.”

Burman adds: “With our complete media management services, Amphinet can take a client’s online presence to the next level, and give a powerful platform to transmit a brand.

“People should think of us as the creative marketing division of their company. They can chuck everything at us and we’ll filter it to show to the outside world, through appropriate online channels.”

Although not presently affiliated to a synagogue, Burman has a strong interest in the Together Plan, a charity which helps socially and economically-underprivileged members of the Jewish community – mainly, but not exclusively, in Eastern Europe and the former Soviet Union.

Every summer for the past five years, Burman has visited the area and produced a film that helps to promote the charity, further its cause and gain more funding.

He says:“It’s a great feeling knowing that the skills you have can make a real and tangible difference to the lives of Jewish people living in such difficult conditions, both socially and politically, especially in Belarus.”

It is Belarus, widely regarded as the last dictatorship in the Western world, that provides him with what he describes as the most hair-rasing anecdote of his career so far, involving too many vodkas, six people in a five-seater car and a “friendly” driver who turned out to be not-so-friendly when the car was unexpectedly stopped at a random police checkpoint.

“The driver quickly forced me to hide in the footwell and covered me in everybody else’s jackets and told me to be quiet if I wanted to stay a free man,” Burman recalls.

“It turned out that the car was stolen and that the police, whom we were told didn’t care, did care after all. “If they’d seen me, apparently, everybody would have been arrested – because we had spent all our money on vodka and had none left for bribes.” Who said digital marketing was boring?