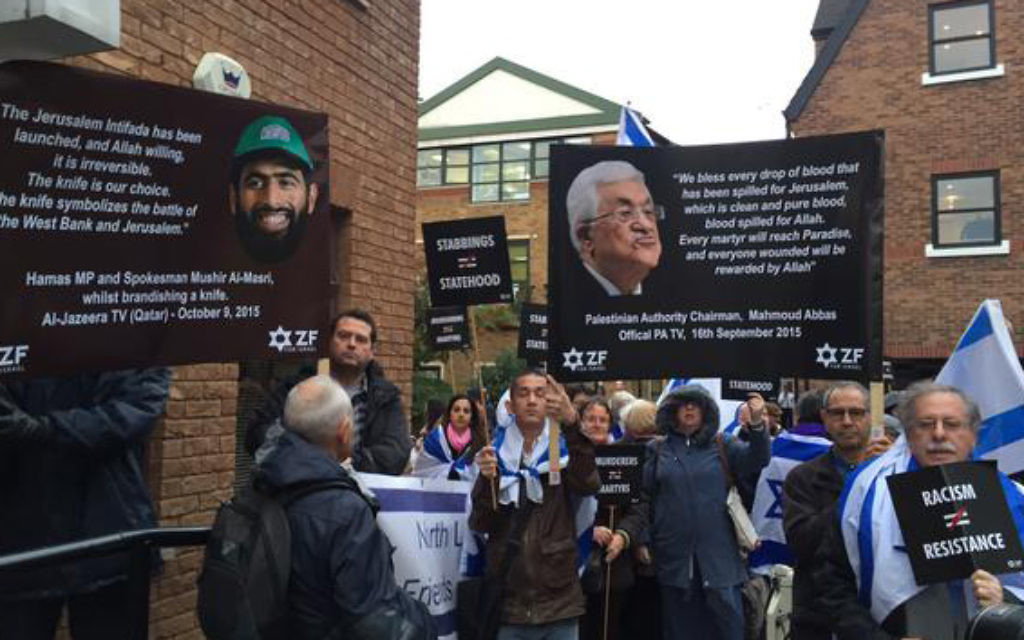 Community members attended a rally outside the Palestinian Mission in Hammersmith on Tuesday to protest against the British media’s  “irresponsible and misleading” coverage of  the ongoing violence in Israel and “an end to incitement from the Palestinian Authority”.

However, the event, organised by the Board of Deputies and Zionist Federation, had earlier provoked anger among some community members, who took issue with the initiative’s hashtag #IsraeliLivesMatter.

ZF director Arieh Miller said news coverage had been “of grave concern,” saying: “We have seen a consistent effort to make sure that – irrespective of the actual facts – Palestinian terrorists are automatically victims, and Israeli civilians automatically villains.”

He called this “irresponsible and misleading” and said the narrative had “deeply troubling undertones”.

Some of the signs being held up at the protest

However, in an open letter to the Board and the ZF signed by more than 150 Jews from across the community and published online, both organisations were themselves criticised for “incitement” for only focusing on the death of Jews in Israel’s latest wave of violence.

“When Jewish organisations, who claim to represent the voice of British Jewry, say only that #IsraeliLivesMatter, it shames us as people who care about the lives of everyone in the region,” they said.

“To take what are presented as uniquely Jewish troubles and lay them at the door of the Palestinians creates a wholly unnecessary ‘Us v Them’ narrative, which cannot possibly foster the good relations necessary for peace… To ‘protest the incitement and commemorate the victims’, solely in the framework of the importance of Israeli lives, itself incites hatred towards Palestinians.”

Verber said the signatories had “misinterpreted” the hashtag, adding: “It goes without saying that we deplore the loss of innocent life on all sides.”

ZF chairman Paul Charney said Israelis felt “the threats to their lives are being ignored” and “their deaths downplayed or even justified,” citing a “misleading focus on Palestinians killed, rather than the Israelis they were trying to kill”.

Marie van der Zyl of the Board, on the left

There was widespread criticism of the media’s portrayal of events, with the Israeli Embassy criticising the BBC for misplaced emphasis in a headline.

Elsewhere, Adam Levick of UK Media Watch cited “extreme bias” from The Telegraph and “misleading explanations” from The Times, adding that an article in The Independent “imputes maximum malevolence to Israel”.

Arieh Kovler, who advises UK pressure group the Fair Play Campaign, criticised Palestinian media coverage, “where every terrorist is an innocent victim… This coverage cultivates a sense of injustice against the terrorists and is used to incite even more attacks”.

Online, there are an increasing number of videos being posted to YouTube that seemed designed to inflame tensions further. In one, Palestinians demonstrate how to stab Israelis, while in another, an Israeli settler rubs raw pork on the face of a Palestinian attacker as he lies on a stretcher.

A spokesperson for the Israeli Embassy in London said: “We deplore this vile and base act of one individual.”

Meanwhile, the Community Security Trust (CST) said: “Developments in Israel are impacting here. We are seeing a rise in aggressive rhetoric, particularly on social media.”

A spokesman urged community members to comply with security measures “as and when requested”.