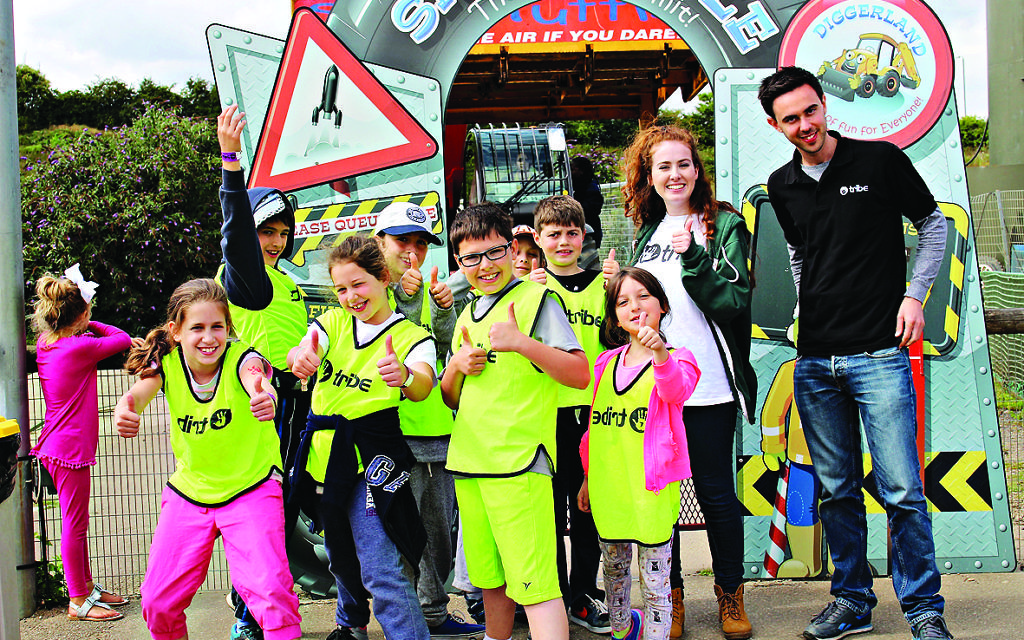 If you have a community-news story that you would like us to feature, please email community@thejngroup.com.

Tribe began its summer programme of Tribe Days Out with a visit to Diggerland. Children from school years three-six enjoyed a day out at the Kent-based theme park which gave the pupils the opportunity to ride, drive and operate full size construction machinery. The trip was one of five Tribe have organised, taking 250 primary school children to visit Go Ape, Danson Water Park and Bounce trampoline park.

Dozens of children have enjoyed taking part in Norwood’s annual programme of summer activities. The five-week scheme, run during the summer holidays – has been hailed as a success by both children and parents. Lisa Lawrence, nursery manager said: “The children are having a wonderful time. We’ve been playing in the adventure playground, and on the few days when the weather hasn’t been glorious, they settle down and get stuck into arts and crafts. Next week we’re all going to be playing parachute games in the garden.” Places are still available for the scheme, which is aimed at children betwen 18 months and five-years-old.

Runners from as far afield as Brent and Beit Shemesh hit the streets of London to raise funds for the Israel-based ZAKA Search and Rescue organisation. Eighteen runners, who had trained together over the past few months, ran alongside 25,000 others at the British 10K London Run, raising more than £4,000.

World Jewish Relief’s Connections Committee raised £12,500 for the international development organisation with its latest event. It’s now in its 25th anniversary year, having been established in 1990 by a group of women dedicated to playing a part in the rebirth of Jewish life in Eastern Europe.  Sixty-four guests enjoyed an ensemble performance from the Barbican Trio at a private home in Hampstead Garden Suburb. Linda Rosenblatt, WJRs vice-chair, said: “It’s humbling to see the difference World Jewish Relief’s supporters have made over the past 25 years. The scholarships have transformed the lives of over 400 students, while helping to regenerate their communities.”

More than 100 people, including many from Jewish and Christian groups across the country, gathered in central London to pay tribute to Alan Aziz, who left the Zionist Federation UK after serving as Director for 15 years. Alan, who announced he was departing to lead JNF UK, said: “It was very touching to hear all the kind words said about me during the evening – not something that is an everyday occurrence in this line of work! I’m grateful I was given the opportunity to lead the ZF all those years ago, and I’m sure it will continue to flourish.”

Cyclist Brian Nathan celebrated his 70th birthday in style at the Prudential Ride London on Sunday as he and fellow Shaare Zedek UK team members [have so far] raised £9,823.13 for the charity’s medical centre in Jerusalem.  Brian (pictured inset), along with Alain Stechler, Jeremy Gubbay (main picture) and Rachel Caplin, completed the gruelling 100-mile race, as they raised a record fundraising total for the charity. Also at the race was driving instructor Jeremy Bendon (far right), who raised more than £600 for the Jewish Deaf Association.

The roof of Western Marble Arch Synagogue hosted 130 young professionals, who enjoyed a Tu B’Av barbecue, coupled with live jazz provided by students from the Royal Academy of Music. The BBQ was organised by Rabbi Sam & Emma Taylor, WMA’s Community Rabbinic couple. Rudy Sillam, a young French Jew who lives nearby in Marylebone said: “There was a fantastic atmosphere as young Jews networked and had a good time on a beautiful summer’s evening in a great setting.”

Bedfordshire Progressive Synagogue hosted a stall at the annual Shefford Fair, which enabled them to distribute leaflets and posters about the synagogue and Liberal Judaism movement, as a continuation of this year’s membership drive.

Stall at the annual Shefford Fair

More than 50 guests attended the launch of the Planting for the Future photographic exhibition at Ivy House. In attendance were Rony Yedidiah-Cline from the Israeli Embassy, and James Miller, the most recent recipient of a Friends of Jerusalem Botanical Gardens horticultural internship, whom organised the event.

The launch of the Planting for the Future photographic exhibition

Woodford Liberal Synagogue was full to capacity when they held their annual celebratory service to mark the end of the Cheder year. The service also provided a farewell to Josh Newham, who’s leaving his position as Head Teacher after eight years

Levi Schapiro on the right