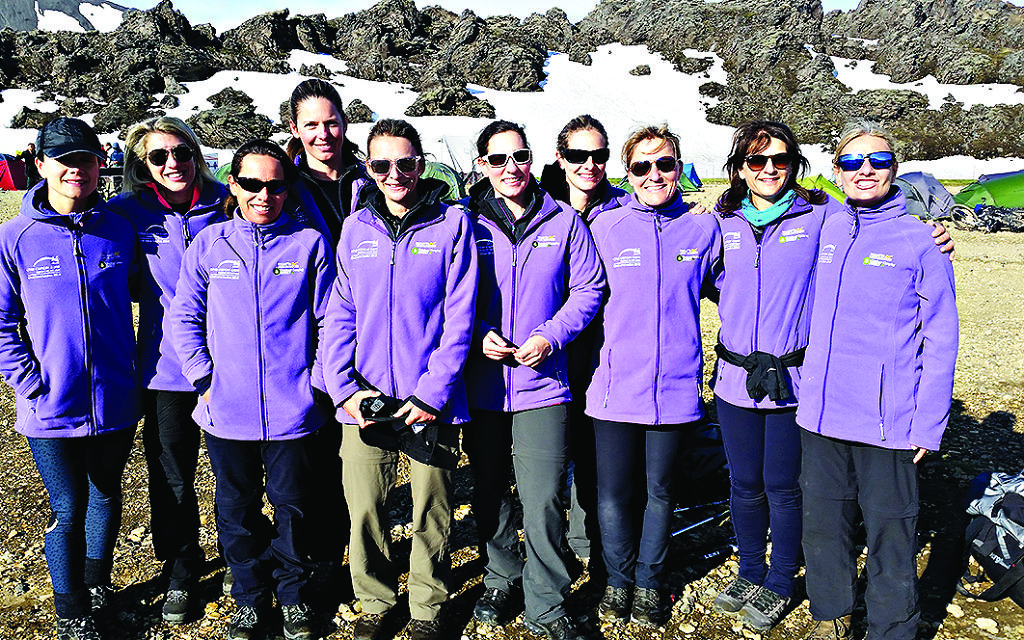 Welcome to Jewish News’ Community News-Roundup! If you have a story that would be of interest, then get in touch!

Adventure-seeking trekkers have returned from the Icelandic wilderness after raising £100,000 for Chai Cancer Care. The 10 female fundraisers trekked across Iceland’s Landmannalaugar route, one of the most actively volcanic areas in Iceland, as they covered 60km over three days, through volcanic mountains and past sheer cliffs, glaciers, thundering waterfalls, steaming lava fields, plunging fjords and spouting      geysers. Chai chairman Louise Hager said: “What this group has achieved is unbelievable!”

All aboard for B’nai B’rith

All aboard for B’nai B’rith

B’nai B’rith UK launched their Young Professionals group with a boat party on the Thames. More than 75 people came to the docked Erasmus and were entertained by a DJ, enjoyed food and took in some of the capital’s leading sights. Future events planned by the group for the remainder of the year include a weekend in Paris and fundraising events for the two charities BBUK supports in Israel and the Ukraine. For more info, visit: http://bnaibrithuk.org/bb-2545

Southgate Progressive Synagogue held an innovative Shabbat morning service which included members of the congregation and their pets. Three generations of members brought along their dogs, rabbits and guinea pigs for a service in recognition of the role animals play in our lives. Stacey Shurlin, who led the service, said: “When we care for our pets, we carry out God’s work. In the beginning, God appointed humans as caretakers for the animals.” The service included readings from the Psalms, Song of Songs, Genesis and numbers and concluded with ‘Chad Gadya’, the traditional Passover seder song.

An annual horse-riding gala, showcasing disabled children’s development over the past year, was held by Step by Step and Jewish Child’s Day, writes Rebekah Henriques. The children, who have disabilities such as cerebral palsy, developmental delays and Down’s syndrome, were set personal targets, performed to their families and received medals for their newly learnt skills, which included trotting and weaving through obstacles. Melanie Klass, Executive Director of Jewish Child’s Day said: “It has been wonderful working with Step by Step to deliver this programme. It is inspiring to see the children’s perseverance at horse-riding and how much they truly enjoy themselves!”

The Association of Jewish Women’s Organisations held their 50th anniversary dinner as more than 110 women turned up for their landmark celebrations at the Central Synagogue. Founded in 1965, the AJWO represents 15 affiliate organisations, including all the major religious bodies and charities associated with Jewish women, as a way of providing a forum for promoting unity and understanding. Zehava Taub, wife of the Israeli Ambassador, was the evening’s guest speaker. Diners were joined by Gwenda Nicholas, president of the National Council of Women and present chair Anne Lyons. The event was also attended by six past AJWO chairs.

Jewish Care held their annual Volunteer Awards event to honour their ‘unsung heroes’. Comedian and writer Ivor Baddiel, presented the awards, saying: “I know first-hand the work you do, and the commitment, dedication, thought and of course care that goes into it.” Three particular awards were given to long-serving Pearl Franic from their Stamford Hill centre, Jackie Lawson from the Family Carers team, and the Minyan team co-ordinators. Jewish Care’s Chief Executive, Simon Morris, said: “Without our volunteers, so many in our community would not be able to stay connected, or make friendships or connections that bring meaning to their lives”.

Ravenswood enjoyed an afternoon fit for a King or Queen as Norwood celebrated its 200th anniversary of Royal Patronage at its summer fair on Sunday. Around 300 people attended the fair, raising £3,000, with the Village Green packed full for much of the afternoon. A packed afternoon of entertainment included games, from basketball, hoopla and penalty shoot to Play Your Cards Right and lucky dip, while guests enjoyed various culinary delights from the Café’s own BBQ and pasta to homemade cakes and soft drinks. Norwood chief executive Elaine Kerr said:  “Ravenswood staff, volunteers and residents worked tirelessly to make the fair the huge success it was. We’re hugely grateful to them and also to all those supporters who donated food and raffle prizes. It was another of the great celebrations we are having throughout services in Norwood Ravenswood this year to mark the charity’s 200th anniversary of Royal Patronage.”

Edgware and District Reform Synagogue recently held the graduation ceremony of a Hadracha course, to celebrate its class of young people completing a two-year leadership programme.

Children and parents were given a summer surprise at Moriah Jewish Day School when they discovered a Big Top in the middle of the playground.