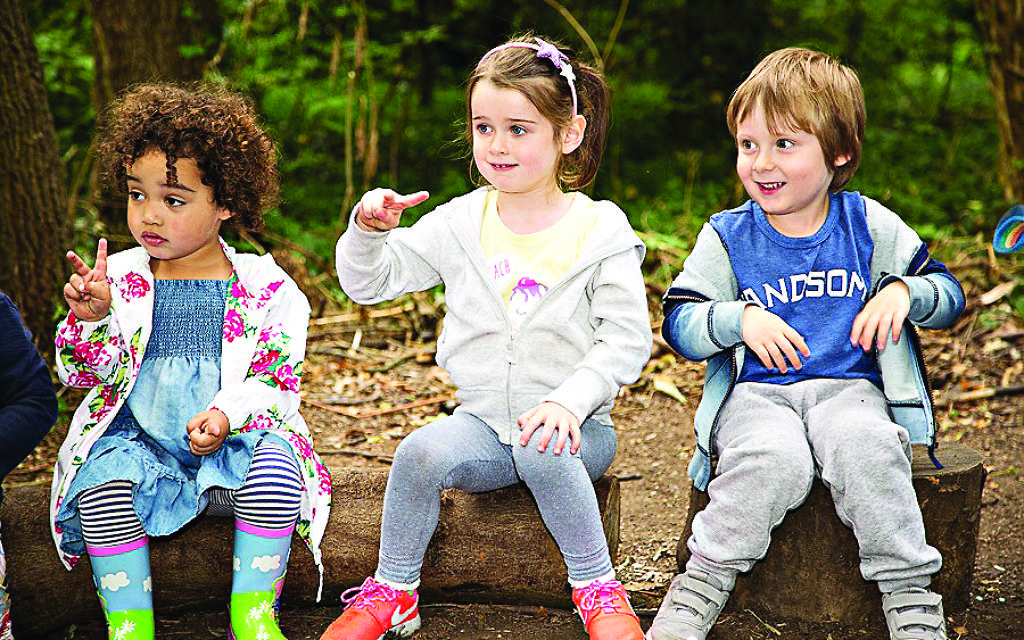 Pinner kids go back to nature

Back to nature ! Pictures: Gander Photography

Children from Pinner Jewish Kindergarten experienced nature in an innovative outdoor classroom as they took part in activities aimed at exploring and understanding their environment. The Cecil Park nursery pupils visited Forest School in Harrow Weald as they enjoyed a puppet trail around the woodlands, took part in leaf painting, blew bubbles with wands made out of natural materials, made things out of plant pots, pine cones and brown play dough, and saw how a special kettle works on the open fire.

More than 200 guests joined Chabad Lubavitch NE London and Essex in the Prince Regent rooms, Woodford Bridge, for its annual dinner to celebrate the ongoing work and growth of Chabad in Essex. The event, which reached Chabad’s fundraising target of £50,000, launched the five-year development plan created for the Essex Jewish community, while the evening also gave Chabad the opportunity to highlight its success and 10th anniversary of Chabad Buckhurst Hill. Former Chief Rabbi of Israel, Rabbi Israel Meir Lau, spoke about the future of the Jewish community across the world and the common threats faced by all Jews.

Rimon gets sporty in the sun

Rimon Jewish Primary School enjoyed a day in the sun at Childs Hill park when it held its third sports day. Children took part in five races, while parents also contested a parent relay race. Sarah Campbell, Rimon’s acting headteacher said: “We had a wonderful sports day in the sunshine, enjoyed by pupils, teachers and parents. The children love their PE classes and demonstrated just how far they have come in their sporting prowess and also worked well together demonstrating excellent team spirit.”

Shuvu, the largest educational network in Israel, raised a record-breaking £1.1million in 24 hours – the largest amount of money raised through any one event in its 25-year history. The ’24 hours for Shuvu’ campaign was run through the New York-based Charidy organisation and was an international effort with operation rooms – fitted out with computers, telephones and food – in Jerusalem, New York, Johannesburg and London. The Pillar Hotel in Hendon was the hub of attention for the British Friends of Shuvu, for an event which saw all donations received quadrupled, as three major donors agreed to match every dollar raised.

UJIA’s Ethiopian bar/batmitzvah twinning programme celebrated its 10th anniversary with a reunion event at St John’s Wood Synagogue. Nearly 100 former participants and family members took part in Ethiopian inspired activities, including drumming, basket weaving and Ethiopian dancing. Guests also heard from 18-year-old Silanet Mekonan, who made aliyah to Israel from Ethiopia in 2006, when she was nine. She said: “If it wasn’t for this project, I would not have had a batmitzvah because my parents did not have the time to deal with this. I would have felt I was missing a very important experience.”

A dozen children from Gan Yachad nursery in Finchley took part in a sponsored pedal push – which raised £500 for ‘at risk’ children in Israel.  Emunah director Deborah Nathan thanked parents, staff and nursery headteacher Reva Ross for their efforts. She told them: “You are never too young to raise funds for Emunah.”

Proud parents joined Mayor of Barnet Mark Shooter and Norwood staff for the Norwood Cafe Training Programme graduation ceremony last Thursday. After the Mayor presented the six graduates with their certificates, graduates and their guests stayed at the Kennedy Leigh Family Centre to celebrate with cakes in the newly refurbished Kennedy’s Café. Norwood’s Cafe Training Programme runs for 18 months, and aims to equip adults with learning disabilities with the skills they need to find paid employment in the food and hospitality industry. During the course trainees gain valuable food preparation, money handling and customer service skills, as well as plenty of on-the-job experience. Norwood’s chief executive, Elaine Kerr said: “The graduates should be extremely proud of their achievements, and it was a pleasure to celebrate with them. Thanks too must also go to the dedicated teaching staff and to the Mayor for presenting the certificates.”

The 34th floor of the BT tower played host to 80 people who turned up for a Jewish Care business breakfast. The event, sponsored by Cavendish Corporate Finance and Brecher, raised £30,000 to support the work of Jewish Care.

Chief Rabbi Ephraim Mirvis joined the congregation of Sandys Row Synagogue as part of its 160th anniversary celebrations. He said the synagogue was “an outstanding example of how a community can impressively withstand the test of time”.

The fourth Hendon Brownies paid a trip to the BBC studios in London, where, they visited   The One Show and Doctor Who’s Tardis.

Kim Ismay, one of the stars of the West End production of Mamma Mia, was the guest speaker at Kingston WIZO’s annual summer luncheon. The event raised more than £1,000.