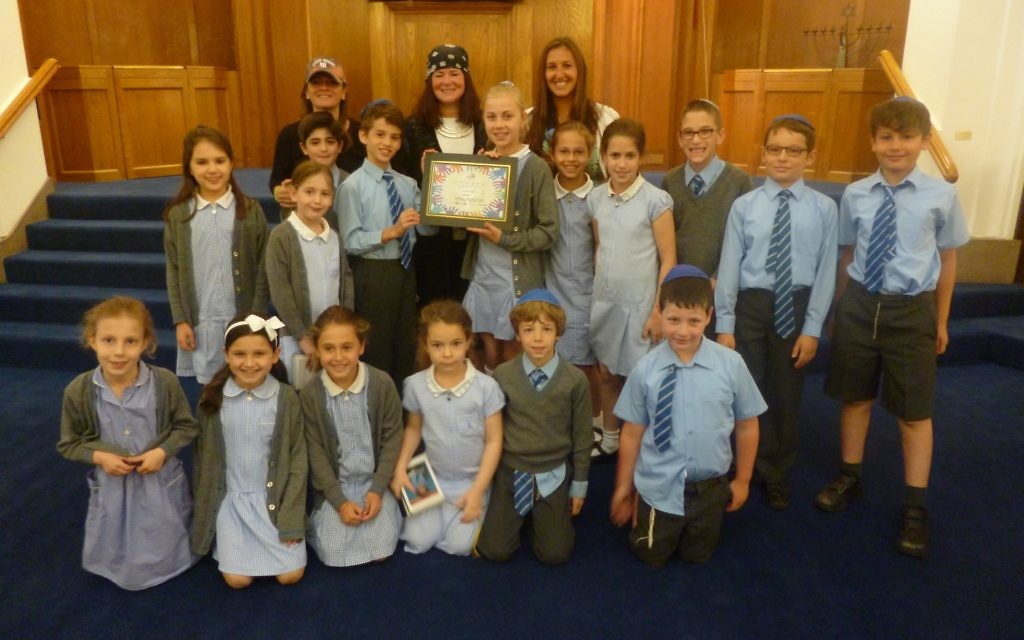 If you have a community story you want to send in, email: community@thejngroup.com

Children from Little Bicks nurseries in Mill Hill, Borehamwood and Ilford enjoyed taking part in the new fundraising initiative Mini Blue-ish Jewish Child’s Day, which supports the work of UK programmes offering a daily breakfast club to disadvantaged kids prior to going to school. The children attended the nurseries dressed in blue, enjoyed a teddy bears’ picnic in the garden and donated money to the charity.

Gabby sings to remember loved ones

Gabby sings to remember loved ones

A concert held in aid of Chai Cancer Care and for the Alzheimer’s Society raised more than £1,500. Gabby Niman organised the event, which was held in Borehamwood, in memory of her grandma Lilian Jacobs, who passed away last year from cancer, both her Nanna Joy Fletcher and husband’s grandma Moselle Ezra who both suffered from Alzheimer’s. Nearly 100 people saw her perform songs, while saxophonist Louis Isaacs also played a trio of pieces. Gabby said: “I’ve loved singing ever since I was a small child. I studied music at Goldsmiths College and really wanted to use my musical abilities to help make a difference to people’s lives.” Her 95-year-old grandfather also came to the concert, having travelled from the other side of London, for the concert which was in memory of his wife.

60th anniversary is a blast!

60th anniversary is a blast!

Borehamwood and Elstree Synagogue held its family funday as 420 people of all ages enjoyed a host of attractions, including bouncy castles, a helter skelter, teacups and saucers, a rodeo bull, train ride, as well as magic shows, sports races and arts and craft. Yavneh College hosted the day, which formed part of the community’s 60th anniversary celebrations and saw the star attraction prove to be the last one standing game – an inflatable version of the television show Total Wipeout.

Eager sixth-formers from JCoSS spent a week at Norwood, as part of the school and the charity’s annual work experience partnership. The 34 year 12 students divided their time between Norwood’s services for children and adults with learning disabilities and its head office in Stanmore. Volunteering manager Jennie Wharram said: “The students were given a taste of the many and varied career paths the sector provides, from support work, to fundraising and finance, marketing and management. During the placement, the students worked with us to develop our young people’s volunteering strategy. It was fantastic to see them get stuck in and make a real contribution to the life of the charity, as well as further strengthening the school’s deep bond with Norwood.” Student Jack Ansell said: “It was a great experience. The highlight was meeting the volunteers who gave up their time to support people with disabilities. That was really inspiring!”

Ice skating in a winter wonderland and partying with the Umpa Lumpas were just some of the activities on offer at two Camp Simcha retreats for seriously ill children and their families. More than 200 family members spent three days away with the charity in Basingstoke and Oxford, with all their medical needs catered for. Camp Simcha chief executive Neville Goldschneider said: “Retreats are a really important part of Camp Simcha’s services. The impact and the benefits last way beyond the three days they spend away with us and we are grateful to all our supporters, staff and volunteers who help make Camp Simcha retreats possible.”

RMI Education, a company that has only been in operation for six weeks, has won the Start TLV competition and been named the UK’s best tech start-up. The UK leg of the competition, which was supported by Microsoft, was organised by Israel’s Ministry of Foreign Affairs together with the city of Tel Aviv. A spokesman for the Israeli Embassy said: “Tel Aviv is the capital of the start-up nation, with more start-ups per capita than any other city in the world; it’s at the cutting edge of innovation.” One of four finalists who took part in a Dragon’s Den style live final at Google Campus, the winners will enjoy a five-day trip to Tel Aviv, which includes a mixture of seminars, workshops and networking events with leading Israeli entrepreneurs and investors.

Alyth hosts ‘kosher iftar’ for all

Alyth hosts ‘kosher iftar’ for all

As part of a nationwide initiative, Alyth Synagogue welcomed local Muslims to its second ‘Kosher Iftar’ evening as almost 100 members from the local Jewish, Muslim and Christian communities attended the daily evening meal that breaks the fast for Ramadan. Following last year’s groundbreaking joint initiative by Alyth and the Muslim community’s Big Iftar, several synagogues and churches around the country are now joining Alyth in hosting this special evening. Rabbi Maurice Michaels said: “The more we come into contact with the Muslim community, the more we realise how much we have in common. Working with them in areas that are less controversial will make the disagreements easier to resolve.” Julie Siddiqi, executive director of the Islamic Society of Britain said: “It’s a privilege to return to Alyth tonight for their Kosher Iftar – the atmosphere has touched us all and I hope, for many, it will be the start of a continued collaboration.”

GIFT’s director Michelle Barnett presents a thank you certificate to year 6 pupils from Kerem Primary School after they raised £350 for GIFT activities.

GIFT’s director Michelle Barnett presents a thank you certificate to year 6 pupils from Kerem Primary School after they raised £350 for GIFT activities.

Six members of Borehamwood & Elstree Synagogue took part in the Blenheim triathlon. Part of the celebrations to mark the shul’s 60th anniversary, money raised will go towards funding a playground.

Six members of Borehamwood & Elstree Synagogue took part in the Blenheim triathlon. Part of the celebrations to mark the shul’s 60th anniversary, money raised will go towards funding a playground.

Residents, volunteers and staff from Jewish Care’s Rela Goldhill and Otto Schiff homes came together for a tea event to celebrate the imminent move of the former to the latter. The move will enable residents to be in a purpose-built facility that will better suit their needs.

Residents, volunteers and staff from Jewish Care’s Rela Goldhill and Otto Schiff homes came together for a tea event to celebrate the imminent move of the former to the latter. The move will enable residents to be in a purpose-built facility that will better suit their needs.

Keren Clement cut her hair and donated it to Zichron Menachem for a fourth time. She raised more than £1,000 for the charity, which help makes wigs for young children suffering from cancer.

Keren Clement cut her hair and donated it to Zichron Menachem for a fourth time. She raised more than £1,000 for the charity, which help makes wigs for young children suffering from cancer.