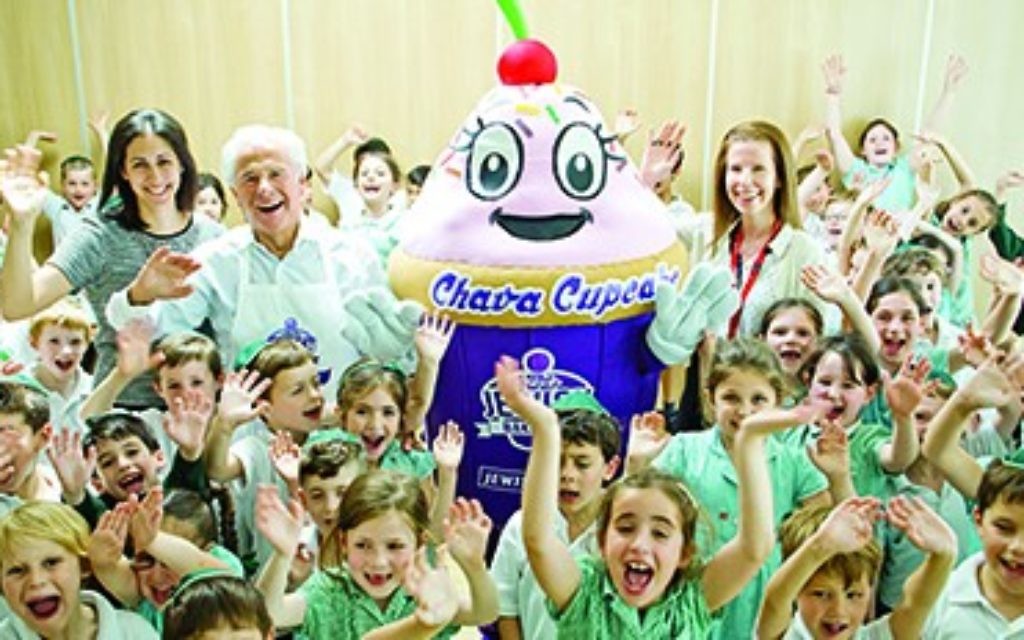 If you have a story for the community news roundup, we want to hear from you! Email: community@thejngroup.com

Chava the Jewish Care cupcake has had a busy week as she helped the community get involved in the third Great Jewish Bake Day. She and Lord Levy met excited children at Etz Chaim School in Mill Hill, the Harris family during her roadtrip at the Great Jewish Bake Day stall at Jewish Care’s Princess Alexandra Family Fun Day, before enjoying a deserved cup of tea and Chava Cupcake with Jewish Care. Elsewhere, clients at Kenton’s Connect@ Centre got together for a chat and cake, as well as engaging in some cooking with Suzy Pelta.

The Fourth European Jewish Choral Festival, marking the culmination of a busy season for the Zemel Choir, which this year celebrates its 60th anniversary, has taken place in London. The Zemel choir sang alongside five visiting choirs: the Synagogal Ensemble from Berlin, the Leipziger Synagogalchor, Ensemble Choral Copernic from Paris, Coro Ha-Kol from Rome and the Varnitshkes Ensemble, a troupe of enthusiastic players and singers from Ukraine. The festival began with the choirs split into three groups to share, learn and sing music together, before they each performed in a concert at The Holiday Inn, in Wembley. They then partook in a Friday night service at Belsize Square Synagogue, with the festival ending with a visit to see the Jewish museum, some sightseeing in London, and a grand finale Gala concert at West London Synagogue.

Can you stay on ?

Borehamwood and Elstree Synagogue held its family funday as 420 people of all ages enjoyed a host of attractions, including bouncy castles, a helter skelter, teacups and saucers, a rodeo bull, train ride, as well as magic shows, sports races and arts and craft. Yavneh College hosted the day, which formed part of the community’s 60th anniversary celebrations and saw the star attraction prove to be the last one standing game – an inflatable version of the TV show Total Wipeout.

TAU’s successful night at the movies

The Tel Aviv University Trust staged a ‘Night at the Movies’ as JW3 hosted a film gala night showcasing the best of the latest crop of short films from its award-winning film school. More than 200 people attended what was the 9th Annual Tel Aviv Film, before they enjoyed a gala reception hosted by Tau Trust, which was attended by the new Mayor of Barnet Mark Shooter and his wife Melissa. TAU Trust executive director Cara Case said: “We were delighted to welcome so many friends to celebrate more of the terrific work of our talented young film makers from our Film and Television School. Many of our graduates go on to succeed on the world stage and we are proud to share this early work.”

Members of Hendon’s Ner Yisrael Synagogue visited two of Norwood’s residential homes for adults with learning disabilities as they looked to spruce up the gardens in time for summer. The 32 gardeners clipped, planted and mowed as part of the synagogue’s chesed programme. Rachel Elbaum, from Ner Yisrael Synagogue, said: “The kids had a wonderful afternoon helping out in Norwood’s gardens.” Allison Nunes, volunteer development officer at Norwood, said: “It’s so good to know that we have such warm and dedicated people living close to our homes in the heart of the community who are willing to help out, and we can’t wait to welcome them again.”

More than 100 people took part in Langdon’s bridge tea event as more than £12,000 was raised for the charity, which supports vulnerable youths and young adults with learning disabilities. Held at Alyth Synagogue, the event was organised by Stephanie Brahams and Susan Lee. Brahams said: “The life of my son Benjamin has been transformed through the support and opportunities that Langdon has provided him. Organising the tournament is my way of saying thank you to Langdon, and help more people with learning difficulties to live independently.” Lee said: “We’re thrilled that so many people attended this hugely enjoyable event. The generosity of everyone who attended will help Langdon to continue to carry out its vital work for people with learning disabilities.”

Seven unique pieces of art produced by the pupils at Sacks Morasha Jewish Primary School fetched more than £11,000 when they were put up for auction at a fundraising dinner. The children created the art, some of which sold for more than £1,000 each. Former Chief Rabbi, Lord Jonathan Sacks, who was accompanied by Lady Sacks, were among the guests. The dinner, at Kinloss Synagogue, raised £130,000 for the school, which will go towards extending its state-of-the-art building in North Finchley. Headteacher Hayley Gross said: “We were overwhelmed by the generosity of the community in continuing to support the school. The beautiful artwork reflects the innovative way we try to teach at Sacks Morasha.”

Barmitzvah trio Joe Furman, Ben Summerfield and Joel Fenton, along with their fathers, climbed Ben Nevis to raise more than £7,000 for Spread a Smile and Great Ormond Street Hospital.

More than 800 school leavers’ packs have been distributed to members of Tribe, the youth arm of the United Synagogue.

Solicitors met with staff, trustees and people with learning disabilities at the inauguration of Kisharon’s legacy memorial garden at its adult day centre in Hendon.