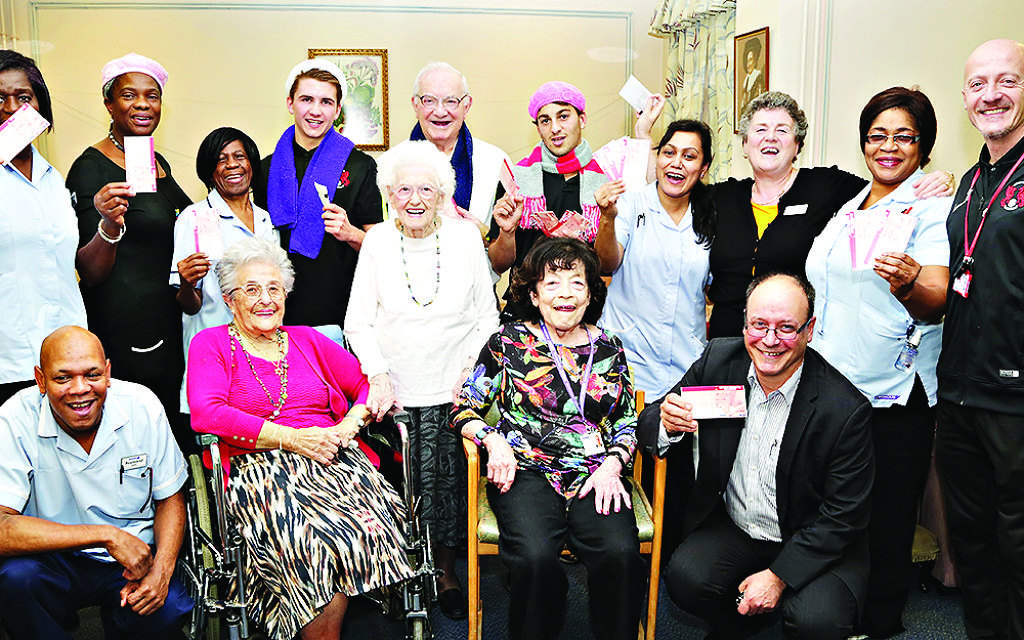 If you have a community news story email it to community@thejngroup.com

Leyton Orient midfielders Sam Ling and Scott Kashket paid a Mitzvah Day visit to residents of Jewish Care’s Vi & John Rubens House in Redbridge as they posed for photos and gave out tickets to residents, staff and volunteers for their next home game.

Kashket, whose 93-year-old great-grandmother Tilly Stern is a resident, said: “It’s nice to come and visit people and chat to them and it’s always lovely to see my great grandma.”

Bradley Fried, deputy chairman of the Court of the Bank of England, addressed a 200-strong crowd at Kisharon’s inaugural business breakfast. Held at the Sheraton Park Lane Hotel and sponsored by Freshfields Bruckhaus Deringer, the fundraiser raised £35,000 for Kisharon’s work supporting people with learning disabilities.

Fried said: “It’s a great pleasure to be associated with Kisharon – it is an outstanding organisation that is truly in the heart of our community.” Freshfields partner Jeffrey Rubinoff, said: “Kisharon is a fabulous organisation that does incredible work. Your support will give people with learning disabilities the chance to aspire to do something we get to complain about every day – going to work!” Picture: John Rifkin

The event was attended by two special guests, Freddy Mutanguha, a Rwandan genocide survivor and the director of the Kigali Genocide Memorial Centre in Rwanda, and Holocaust survivor Chaim Olmer, who has attended the trip for the past couple of years. Mutanguha addressed more than 500 people during his two-day UK trip, speaking to students at JFS and youth movement leaders at JW3.

He also attended an evening at Kinloss and spent a morning speaking to people at the Holocaust Survivors Centre.

Children get in mitzvah spirit

Children at Norwood’s Kennedy Leigh Family Centre in Hendon showed their community spirit this week, collecting for local food banks in the run up to Sunday’s Mitzvah Day. Centre Manager Julie Marcow said: “We can’t believe just how quickly our collection boxes are filling up, and the children love being involved. We’re still collecting, so if you’ve got any tins or essential items like pasta, tea or toiletries, please drop them off at the Family Centre. Even the smallest donation could make a big difference.”

Rachelle Fraenkel, mother of Naftali Fraenkel, one of the three boys kidnapped and killed last summer in Israel, addressed more than 900 people in a series of talks given in England.

Brought over by Mizrachi UK, she spoke at nine separate events to audiences which included secondary schools, synagogues, the Midrasha and the Borehamwood community.

Mizrachi UK executive director Josh Pomerance said: “It was a privilege for Mizrachi UK to bring Rachelle to the UK. “We are immensely proud that we were able to bring Rachelle’s unique Religious Zionist voice to so many within our community and we would like to thank all the other communal organisations which worked with us to make her trip such a success.”

Mr Streeting said: “Visiting Ilford Jewish Primary School was an absolutely fantastic start to my day. Year 6 pupils did an outstanding Q&A. Kids always ask the hardest questions and this was no exception. I agreed to raise some of the issues discussed in Parliament, which I will seek to do at the earliest opportunity.”

More than two hundred members of the community joined the conversation about ‘New ideas on the Jewish story, Israel and us’ at ‘Sippur’, UJIA’s second convention, in association with JDOV.

And instead of guests being urged to turn their mobile phones off, they were actively encouraged to get involved in the online conversation throughout the live event, using #sippur and tagging @UJIAcharity.

Artist Gustav Metzger was the guest of honour at the Yad Vashem-UK Foundation’s private evening viewing at Tate Britain. Simon Bentley, YV-UKF introduced the evening, while Trudy Gold of the YV-UKF Advisory Board led a Q&A session. Picture: John Rifkin

Brian Bloom, chairman of AJEX, was a guest speaker at Immanuel College’s Remembrance Service ceremony, held to mark the anniversary of Armistice Day.