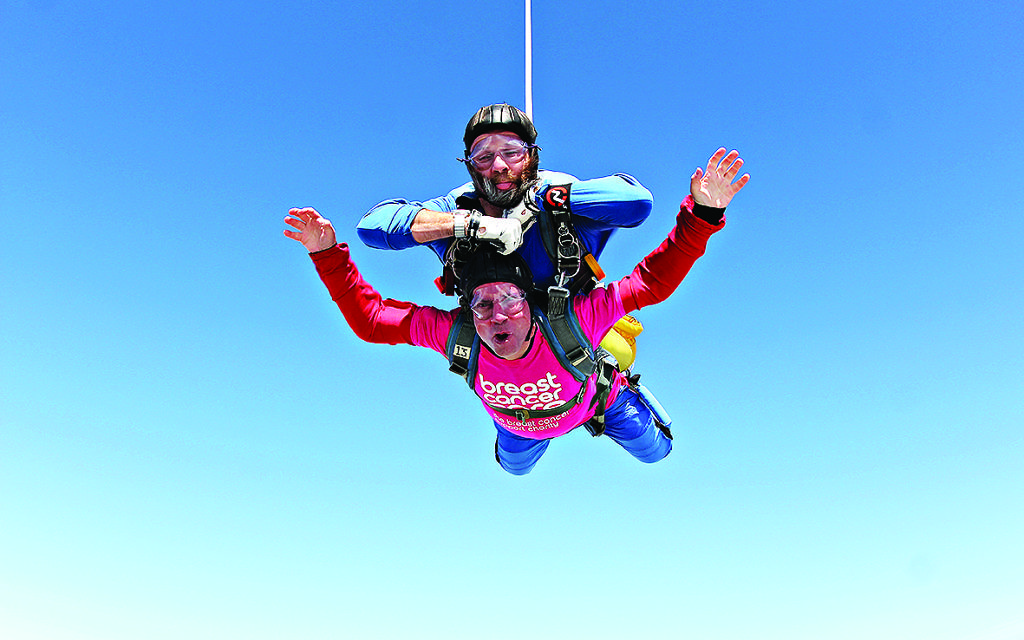 Email your story to community@thejngroup.com!

Keshet scheme ends with a roar

Keshet scheme ends with a roar

Camp Simcha’s Keshet summer scheme ended with Sumatran tigers, more than 100 other species of animals and a dinosaur trail. Around 150 family members from London, Leeds and Manchester joined the Camp Simcha team at Drayton Manor Theme Park for the culmination of nine packed days. Head of services Daniel Gillis said: “It was a fantastic day out and a great way to end another successful Keshet.”

David Landau didn’t let his fear of heights get to him when he leapt out of a plane from 13,000 feet, raising more than £2,400 for Breast Cancer Care. The 59-year-old, who is on the board of Edgware United Synagogue, and chairman of Friends of Alyn, a hospital for physically disabled children in Jerusalem, has undergone two spinal operations and ran the Great North Run for Children with Cancer last September. He carried out the jump despite his fear preventing him from being able to venture up the London Eye.

Gift of a summertime grill

Gift of a summertime grill

It was a summer full of BBQs thanks to GIFT, whose ‘GIFT Summertime Grill’ has raised more than £10,000 for families in need. More than 60 BBQs were held and enjoyed by people in London and Manchester. GIFT’s project manager Gila Howard said: “We created the initiative for people to host BBQs in their homes for their friends during June and July to raise money and awareness for GIFT.” For more information about the charity, email: info@jgift.org

Emily Bentwood has just undergone a £3,100 haircut – all in the name of charity. The eight-year-old had 12 inches of her hair cut off, which will make a wig for a child who has lost their hair through cancer treatment, while also raising money for Camp Simcha, the charity which has been supporting her family through her older brother Sammy’s illness. Emily said: “I’ve always had long hair so I was a bit nervous about having it cut, but I wanted to help make things a bit better for a child who has cancer. My grandpa suggested raising money for Camp Simcha too, and I thought that was a really good idea because they have done so much for my family.” Camp Simcha chief executive Neville Goldschneider said: “It’s wonderful Emily is doing this to help other children who are not well.”

One-on-one fun in the sun

One-on-one fun in the sun

Norwood’s Unity summer scheme at JCoSS in New Barnet is giving children aged between five and 18 a summer to remember. The varied programme offers support from specialist workers and is tailor-made for children with special educational needs and learning disabilities. A summer scheme staff member said: “Between 10 and 15 children attend every day and they get one-to-one attention from support workers, giving parents a much-needed break over the summer holidays. For some children, it’s the first summer holiday scheme they’ve actively enjoyed.”

JW3 IS HOSTING the 18th annual Mind Sports Olympiad. More than 60 different board game tournaments are running, alongside free ‘learn to play’ sessions. The event runs until Monday.

Kerem student Max Goodall won a ‘guess the number of sweets in a jar’ competition – which saw him win 350 sweets and lollipops. The seven-year-old said: “Even though I love sweets, I decided to donate them all to children less fortunate than me through the charity GIFT.”

The Hartsbourne Ladies Charity Committee held a golf day in aid of Jami as 20 competing teams raised more than £40,000 for the mental health charity. Jami chief executive Laurie Rackind said: “We’re truly grateful to the committee for the enormous effort it put in to raise such an outstanding amount for Jami.”