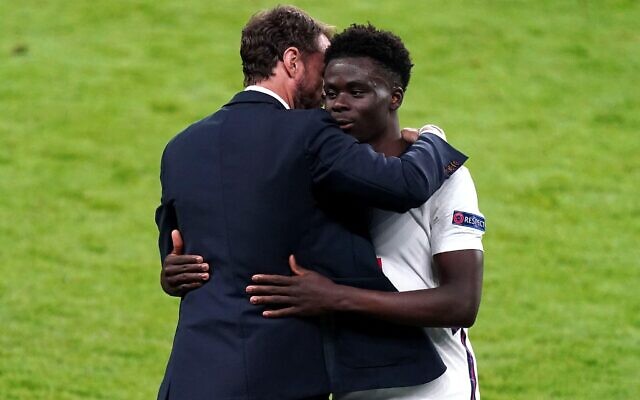 Social media trolls have targeted players Rashford, Sancho, and Saka with sickening racist slurs and language in the wake of England’s loss 3-2 in penalties to Italy at Wembley.

Community Security Trust has joined those condemning the abuse, saying it was “appalled” by the scenes, which are being investigated by the Met Police.

“It is despicable and should not be tolerated,” said CST. “We are calling on all social media platforms to identify anyone involved and encourage them [to] pass their details on to the police.”

Lord John Mann, the government’s independent adviser on antisemitism, said the social media trolls were not representative of our country and must be treated with contempt.

“These Billy no mates hide in their bedrooms abusing young footballers,” he said.

“They are not representative of our country, its values or our future. Treat them with the contempt they deserve.”

In the immediate aftermath of the game, the Chief Rabbi, Ephraim Mirvis, praised the efforts of Southgate and his team.

“The result may not have been the one we were hoping for, but Gareth Southgate and his players have brought the country so much pride and joy over the last month,” he said.

Prime minister Boris Johnson also hit out this morning at racists sending abuse, saying the team deserved to be heralded as “heroes, not racially abused on social media.”

Meanwhile, the Duke of Cambridge, Prince William – who also serves as the FA President – said he was “appalled” by the scenes.

Officers at the Met Police said they are “aware of a number of offensive and racist social media comments,” directed at players on the England squad.

“This abuse is totally unacceptable, it will not be tolerated and it will be investigated,” a force spokesperson told media.

Board of Deputies President Marie van der Zyl sai: “The racist abuse aimed at England’s Black players online is appalling and we hope the perpetrators can be tracked down and met with the full force of the law. We have long campaigned for tighter regulation on online abuse and this underscores why it is so necessary. Bigots, thugs and vandals like these contribute nothing to our society, whereas this diverse England team under Gareth Southgate has achieved so much and we commend their excellent representation of our country both on and off the pitch.”