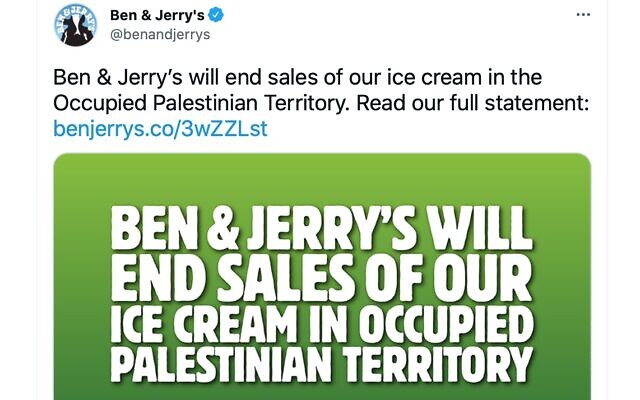 Ben & Jerry’s ice cream has confirmed it will stop selling produce in Israeli settlements in what it described as “Occupied Palestinian Territory (OPT). ”

They American firm said it had “recognised the concerns shared with us by our fans and trusted partners” and that too carry on with current trading arrangements would be “inconsistent with our values.”

The company said that while it will no longer sell in the OPT “we will stay in Israel through a different arrangement. ”

In a statement on Monday, it was confirmed:”We believe it is inconsistent with our values for Ben & Jerry’s ice cream to be sold in the Occupied Palestinian Territory (OPT).

“We also hear and recognize the concerns shared with us by our fans and trusted partners.

“We have a longstanding partnership with our licensee, who manufactures Ben & Jerry’s ice cream in Israel and distributes it in the region.

“We have been working to change this, and so we have informed our licensee that we will not renew the license agreement when it expires at the end of next year.

Although Ben & Jerry’s will no longer be sold in the OPT, we will stay in Israel through a different arrangement. We will share an update on this as soon as we’re ready.”

“The decision is entirely unacceptable. Ben & Jerry’s international decided not to renew their agreement with us in a year and a half after we refused their demand to stop distribution throughout Israel,” it says. “We urge the Israeli government and consumers — don’t let them boycott Israel.”

“Keep ice cream out of politics,” it adds.

Ben Cohen and Jerry Greenfield , who were childhood friends from New York, opened their first ice cream scoop shop in a renovated gas station in Burlington, Vermont in 1978.

Ben & Jerry’s owners are both Jewish, and have long sided with so-called progressive causes in the US.

In 2018 they received criticism for promoting the Women’s March and Linda Sarsour—Women’s March board member— who is a BDS supporter who once tweeted “Nothing is creepier than Zionism.”

Today the company operates globally as a fully owned subsidiary of Unilever.

The firm – which has produced popular flavours such as Chocolate Cookie Dough and Strawberry Shortcake – have always claimed to be a “values based” organisation.

It has faced calls to stop selling their produce in Israeli settlements in the West Bank and East Jerusalem for over a decade.

This post created hundreds of responses from around the world criticising the company for selling their ice cream outside the original boundaries of Israel and in Israeli settlements located in the West Bank and East Jerusalem.